Waiting in line for Hess trucks a Thanksgiving tradition of yesteryear

Collectibles from the 1960s still fetch thousands of dollars 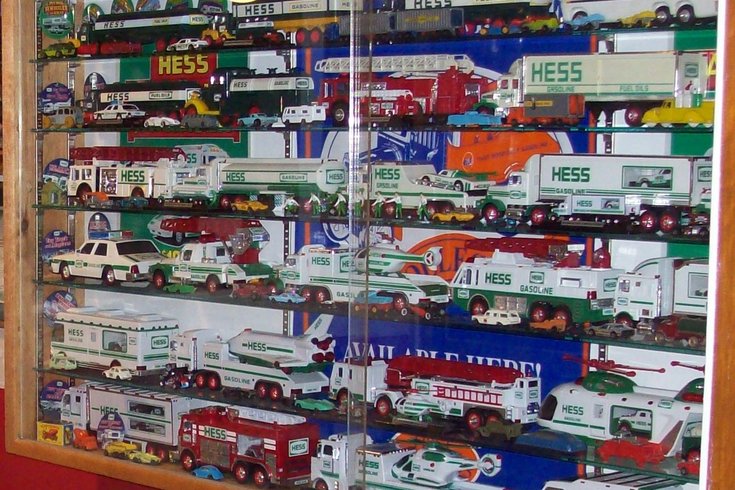 Ron Collas, 64, of Broomall, keeps many of his Hess toy trucks on display. The oldest toys – sitting on the top row – have been sold.

Every year, Thanksgiving kicks off the holiday season with a number of traditions that include turkey dinners, football and the Macy's Thanksgiving Day Parade.

But for decades, many families added another ritual to the fall holiday – a trip to the local Hess station.

RELATED READ: Here are seven of the most valuable Hess trucks

There, they'd wait in line to purchase the annual toy truck manufactured by the petroleum company. But the kids often had to wait until Christmas to play with the toy, which became a hallmark of the holiday season.

"That truck was beautiful for a little kid, with actual lights and things that worked on it," recalled Ron Collas, 64, of Broomall, Delaware County. "They were just quality-made trucks. We played with them and enjoyed them. I'm sorry I wrecked the crap out of them when I was a kid."

When Hess released its first toy truck in 1964, few people anticipated that the replica trucks would become collectibles worth, in some cases, thousands of dollars.

But by 1995 – when Hess bumped up the first day of sales – many people had taken to stashing them away, taking special precaution to preserve their colorful, cardboard boxes.

And the lines at the stations had grown particularly long.

"My son – I started getting them for him," Collas said. "We'd go wait in line at the Hess station. Quite a few times, it would be snowing. It's just a family thing."

The 2017 Hess truck – a dump truck and loader – marks "the heaviest and most complex" truck it has ever made, according to Hess. It features a hydraulic-powered lifting bed, LED lights, sound effects and a workable tailgate. The loader self-propels in multiple directions.

Hess has long prided itself on releasing a toy complete with bells and whistles.

The first one – a replica of the company's Mack B tanker truck – included a workable funnel to fill the cargo tank and a flexible delivery hose to drain it. It also had working headlights and taillights, a preview of Hess trucks to come.

Over the years, Hess shifted away from replicating trucks in its own fleet. Instead, it has featured an array of fire trucks, race cars and aircraft.

Collas still keeps many of his Hess trucks on display, though he has sold his most valuable ones.

"The new ones, the value is gone, really because people buy 10," Collas said. "I stopped getting them a couple of years ago because my cabinet was full."

This 1965 Hess Tanker Trailer is an authentically styled miniature of the original Hess tanker trailer. The truck is painted in the company's old colors of dark green, white and yellow with bright red accents. The tank could be filled with water using the included red funnel and emptied through its attached hose.

The oldest trucks – those from the 1960s – remain the most valuable, selling for thousands of dollars, according to Ray Patterson, a longtime Hess truck dealer. Trucks from the 1970s can fetch several hundred dollars.

After that, prices generally drop below $100 – sometimes considerably.

Hess increased production in the 1980s as popularity and collectibility soared. Most trucks from the last 30 years can be found relatively easily and in good condition, too.

"It still is a collectible, but it is more of a toy," said Patterson, of Oakhurst, New Jersey. "They started putting space shuttles on a flat bed in 1999. They started with the wild toys – more lights, more sounds."

Patterson has made an online business of selling Hess trucks and replacement parts salvaged from banged-up Hess trucks.

His website, Ray's Hess Toy Trucks, offers a plethora of information about the trucks, including detailed descriptions of each annual model and rare special editions.

Patterson, a firefighter, began selling Hess trucks on eBay in the 1990s before branching out on his own. His customer base includes a mixture of collectors and parents shopping for toys for their children.

"The fire trucks seem to be very popular because kids want to be a fireman when they grow up," Patterson said. "With the flashing lights, it seems to put them in a daze. Even at a real scene, they see the lights and they're taken back by it."

'I STILL ENJOY IT'

Hess produced its first fire truck in 1970, a replica of the pumper used at the Port Reading Refinery in New Jersey. It featured a chrome bottom, a swiveling water cannon, an emergency light and detachable hoses and ladder.

Vertlieb, 61, began purchasing Hess trucks in 1980 when the first of his two children was born, hoping he could later sell them to pay for their college education. Thirty-seven years later, he's still buying them.

"To this day, I still enjoy it," Vertlieb said. "Now, I have about 20 tubs of Hess trucks, Sunoco trucks, Wilco trucks, Getty trucks, Gulf trucks – every truck you can think of."

For several years, Vertlieb sold collectibles at a booth in a consignment shop, hawking everything from Coca Cola collectibles to golf memorabilia. But his Hess trucks were always off-limits.

Like Collas, his passion for Hess trucks was sparked by nostalgia from his childhood. He also remembers driving into New Jersey to the nearest Hess station on Thanksgiving to pick up the newest truck.

"When we were little, my dad would buy them," Vertlieb said. "We would open them up and play with them. When you're a little kid like that, you're tickled pink with it."