If you aren't among the lucky people who get extended holiday breaks for work or college, you're likely just sailing through the next few days on cruise control until New Year's Eve (author's note to PhillyVoice editors: I do not count myself among these people).

But how, you ask, can one find an activity so mind-numbingly time-consuming it can make a full eight hours in your desk chair seem like the blink of an eye? I present to you the Pennsylvania Game Commission’s Eagle Cam, which returned Wednesday.

The camera is set up at a bald eagles’ nest in Hanover, York County. Per a Game Commission press release:

The Eagle Cam is provided through a partnership among the Game Commission, HDOnTap, Comcast Business and Codorus State Park.

The Eagle Cam features two cameras, each equipped with a microphone, running round the clock to capture footage from 75 feet high in a tree adjacent to Codorus State Park. Eagles have nested at the tree for more than 10 years, and have successfully fledged young there many times.

Last year, however, was a tough one for the eagles at the nest. While one of two eggs hatched, the chick died shortly after. And while the adult eagles loyally continued to incubate the remaining egg, it never hatched, and they abandoned their nesting attempt.

Then the nest partially collapsed, casting doubt on whether the Eagle Cam livestream could continue at the same site in coming seasons. But the nest was rebuilt, and a pair of adults appear ready to make another go of it this season.

Hopefully, this year's outcome isn't as tragic — I'm not sure we can handle any more loss this year. Anyway, as of press time, I had been watching the Eagle Cam for about half an hour and had yet to see the birds. 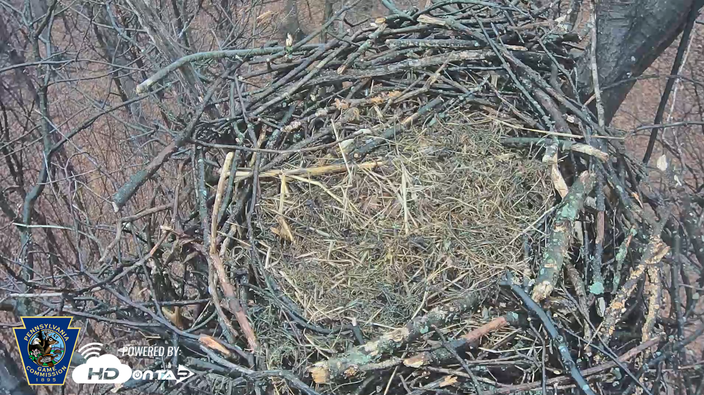 A screenshot of the Pennsylvania Game Commission's Eagle Cam on Thursday, Dec. 29.

For journalistic purposes, this viewing will continue for about the next four hours or so, and I'll update this post if one of the eagles appears. You can watch the live-stream of the two cameras here and here.