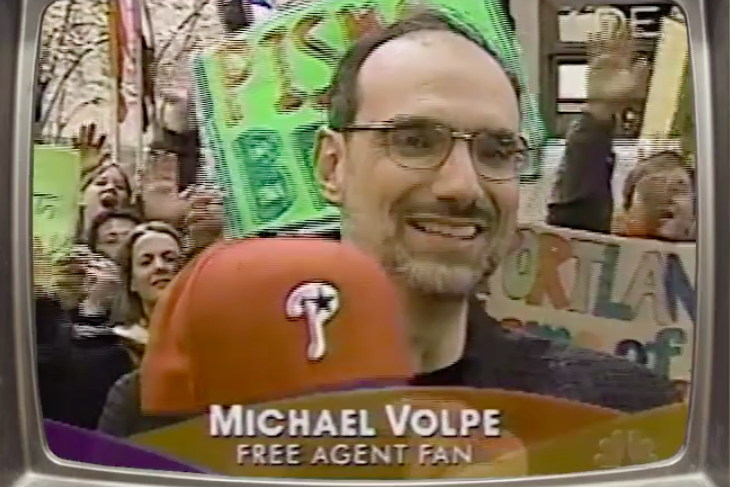 Twenty years ago, Michael Volpe chose the Phillies after ditching his San Francisco Giants and becoming a 'Free Agent Fan.'

Twenty years ago, Michael Volpe ditched his beloved San Francisco Giants after they traded his favorite player, Matt Williams, and became a "Free Agent Fan." He wrote to every other MLB team offering his services as a fan, and almost all of them responded. A media frenzy ensued as teams courted his services. The Yankees offered to have him throw out a first pitch, and the Orioles had him sit down with then-general manager Pat Gillick.

In the end, Volpe chose the Phillies. But why?

Volpe's free agency as a fan is the subject of a new mini-documentary made by his son, Andrew Volpe. Michael, 64, a retired federal employee who now lives in Virginia, and Andrew, 29, talked to The Washington Post about the new documentary and Michael's fandom since picking the Phightin’ Phils in 1997.

What ultimately swayed Michael was a heartfelt letter from the Phillies' director of promotions, John T. Brazer. Brazer, who said at the time that writing the letter was a "cathartic" experience, told Volpe that being a Phillies fan meant enduring a decent amount of losing but also meant being part of a community of fans who felt like family. His letter read, in part:

"To be a Phillies fan you have to have hope in your veins, fealty in your heart, comfort in your soul and a lump in your throat."

As the Post notes, Volpe — who also picked the Durham Bulls for minor league baseball — would eventually enjoy a World Series title when the Phillies won it all in 2008; the team actually gave him tickets to Game 3 of that series. Sure, the Giants would go on to win three titles in 2010, 2012 and 2014. But Volpe has no regrets. Per the Post:

Props for sticking with us, Michael. You can read the full Post account here and watch the documentary below: