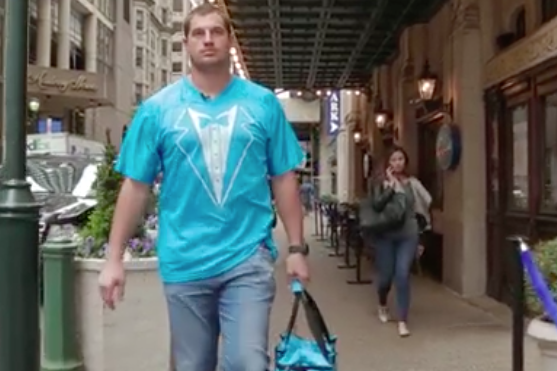 As one of the longest tenured Philadelphia Eagles, stalwart tight end Brent Celek has steadily and methodically branched out to establish himself as a prominent figure in the City of Brotherly Love.

In addition to his Prime Stache, an American Bistro in Old City, Celek plans to open a Korean restaurant on Broad Street and continues to lead the Take Flight Foundation, which provides support for seriously ill and physically challenged children throughout the Greater Philadelphia area.

On Wednesday, Celek took some time to do a little surprise promotional work with Favor, the fast-growing delivery app that launched in Philadelphia earlier this month. The concept is pretty straightforward: Favor, known for its blue tuxedo T-shirts, sends "runners" out to pick up various essential items on-demand for its pool of users.

Celek and Favor, knowing their audience, decided to stop by Geno's Steaks to pick up forty cheesesteaks and deliver them to workers at the co-working office space Industrious. Celek then took a stroll along South Broad Street to distribute whatever was left.

Brent Celek Delivers to Locals in Philly with Favor from Favor Delivery on Vimeo.

"It was great to work with him and Geno," said Mike Moore, Favor's Launch Manager in Philadelphia. "Brent's a busy guy, just had a baby and he's working on a new restaurant. We plan to partner with him at Prime Stache and Bop. He'll be around Philadelphia for a while. He said the hustle and passion of the people here really speaks to him."

Celek signed a three-year contract extension with the Eagles in January and will be part of a platoon with fourth-year tight end Zach Ertz, who signed a five-year deal of his own a day before Celek. For his career, Celek has 371 receptions for 4,713 yards and 30 touchdowns. He is tied with Keith Byars for fifth all-time in career receptions with the Eagles.