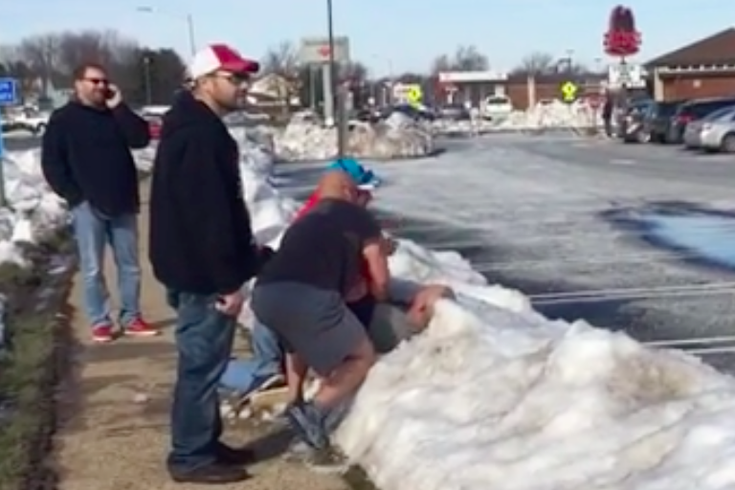 This screenshot from a YouTube video shows George Blackwell of Levittown being subdued after allegedly robbing a woman in the parking lot of a Bucks County shopping center.

Two men came to the rescue of a woman who was robbed at knifepoint in the parking lot of a Bucks County shopping center Saturday.

The Bucks County Courier Times reports that 60-year-old George Blackwell came up to a 53-year-old woman outside a bank on the Levittown Parkway near the Queen Anne Plaza shopping center armed with a box cutter.

Blackwell allegedly grabbed the woman's purse from her car. When the woman fought back, he slashed her on the lip and took her wallet.

That's when three unidentified men ran after Blackwell and pinned him down in a snow bank until police could arrive. The aftermath of the incident was caught on video and posted to YouTube:

The man who took the video, Ron Roberts, described what happened to NBC Philadelphia:

"These guys were big. They threw him over the snow and they had his head in the snow. They weren't letting him get up. They made sure he was going to jail today."

The woman who was attacked had a minor cut to her lip but wasn't seriously hurt. Blackwell, a Levittown resident, has been charged with robbery, aggravated assault, theft and related counts. He was jailed at Bucks County Prison on $100,000 bail.