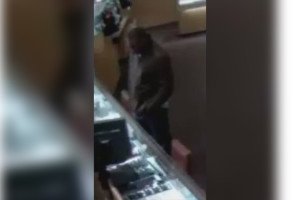 The Philadelphia Police are seeking help identifying this man, who police say, snatched and ran with rings from two jewelry stores in the Philadelphia region on Nov. 10.

The Philadelphia Police are seeking help identifying a man who is wanted in association with thefts from at least two area jewelry stores, both on the same day.

According to the police, the suspect is wanted for a retail theft from a store in Franklin Mills that happened on Nov. 10.

Police said that at about 8:40 p.m., officers in the city's 8th police district responded to a report of a theft at Kay Jewelers inside Philly Mills located at 1455 Franklin Mills Circle in Northeast Philadelphia.

According to police, an employee reported that a man requested to see a ring, but once the man had the ring in his possession, he fled the store and hopped into a black Dodge Charger and was last seen fleeing through the parking lot.

Earlier that day, law enforcement officials said, a man stole a ring in a similar fashion from Helzberg Diamonds located at 1205 Nixon Drive in Moorestown, New Jersey, at approximately 7:30 p.m.

In that case, police said, the suspect entered the store asking to see engagement rings and then, once he was in possession of a ring, he fled the store in a black Dodge Charger.

Police described the wanted man as a black male, 35 to 45 years old and about six-foot tall with a medium complexion, short black hair and a gray goatee. At the time of the crime, police said, he was wearing a brown leather jacket, plaid shirt, blue jeans and white sneakers.