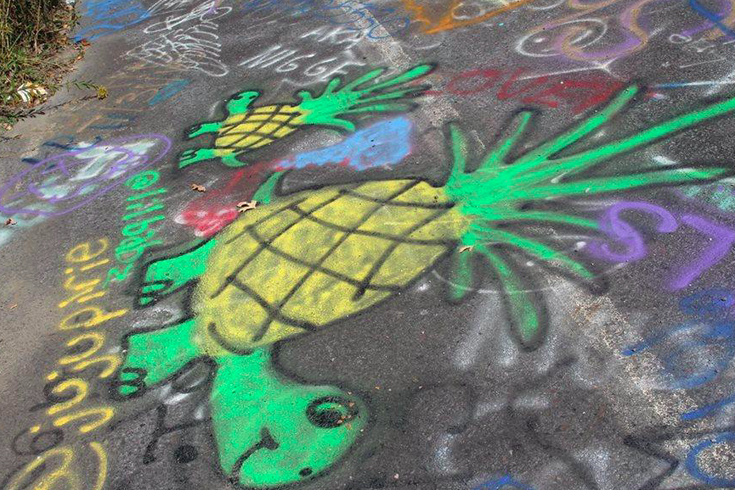 Centralia, Pennsylvania's spookiest ghost town, lives on in the hearts and minds of its former residents.

Beneath the streets of an abandoned suburban jungle, the coal fire that ignited in 1962 continues to burn —uncontrollably — more than five decades after it was likely caused by a trash dump blaze. When several attempts to contain the fire failed, concerns about sinkholes and seeping carbon monoxide drove the state to oversee a $42 million voluntary relocation program.

The town's population was about 2,000 in 1950. Today, it's about ten. Those who stuck around are only there because they won an eminent domain case in 2013. The subterranean threat doesn't seem to bother them.

This weekend, in keeping with custom, about 200 former Centralians joined at a secret spot just outside of town, according to Penn Live. They gather to dance, barbecue, drink beer and share old photographs.

Some Centralians recall years of factional disputes about whether or not to evacuate, while others simply lament the loss of their beloved "small town America" stomping grounds.

There is one thing that has found a new home in Centralia: graffiti. Tons of it, a whole highway's worth. Route 61 was permanently closed in 1994 as smouldering plumes of smoke and steam rose through multiplying cracks in the pavement. Since then, nearly the entire roadway has been covered in tags.

By the way, if all of this sounds too good not to be eerily fictionalized, NBC is already on it. Last October, the network picked up Pottsville native and executive producer Meredith Averill's pitch for a television series about the "evil" lurking below Centralia's last remaining residents.