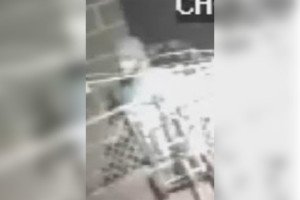 Philadelphia police are hoping the public can help identify this man. According to police, he and another man were involved in a home invasion and robbery in the city's Strawberry Mansion neighborhood on Nov. 30.

Philadelphia police are seeking the public's help identifying the men who law enforcement officials believe are responsible for a home invasion and robbery that occurred in the city's Strawberry Mansion section on Nov. 30.

According to police, at about 6 a.m. on Monday, Nov. 30, a 58-year-old man told authorities that he was inside his residence in the 2900 block of Ridge Ave., along with others who were sleeping, when they were woken up by two unknown black males.

Police said that the first suspect, who was armed with a knife, grabbed the victim from the middle bedroom and held him at knifepoint while the other assailant began ransacking the bedrooms.

Police said the men took an undetermined amount of money from a briefcase, along with a watch and several pieces of gold jewelry from a bedroom.

After taking the money and gold jewelry, police said the two men fled out a back door and were last seen jumping over a fence and then entering an older model silver vehicle that was parked and idling on 30th Street with an unknown driver waiting inside.

Police described the first suspect as a black male, about 5 feet 8 inches to 5 feet 9 inches tall. The second suspect was described by officials as a black male about the same height who was wearing a black hooded sweatshirt with the hood up and a mask on his face.