Philly weekend weather starts off rainy, but clears up by Saturday afternoon 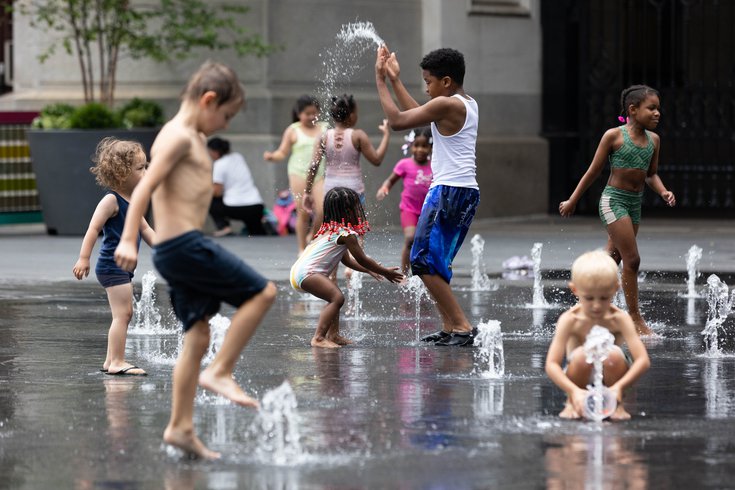 The weather this weekend in Philly and at the Jersey Shore will start with some rain but the clear up by noon Saturday. Sunday will be sunny and pleasant as the humidity drops, making for a great beach day. Above, children cool off in the fountains at Dilworth Park in Center City.

Already gearing up for the weekend, again. Where does the time go? It's been an unsettled week of weather that has resulted in several chances of rain and that theme will continue for a portion of the weekend, unfortunately.

High pressure has been very persistent to the southwest, which has set up what's called the "ring of fire" pattern. Showers and storms roll along the northern fringe. Most of the severe weather has missed to the south, but there's still a threat of some raindrops in the forecast.

A frontal system is working through Friday and early Saturday, which could allow a slug of rain to ride into the Delaware Valley. The precipitation should wrap up by lunchtime on Saturday. Clearing will initiate from west to east by late morning.

High pressure builds in on Sunday and some incredible weather will follow. Dew points come down, temperatures are comfortable in the 70s and 80s. Good beach weather.

Watch the video below for more details about this weekend's forecast in Philadelphia and the Jersey Shore, and scroll further for an at-a-glance look at the weather this weekend.

• FRIDAY: Clouds, maybe some patchy fog early in the morning. Afternoon skies will try to become partly sunny. An isolated downpour is possible. Better chance of rain arrives in the evening and overnight. Highs in the mid and upper 80s. Chance of rain 40%.

• SATURDAY: Lingering clouds and showers. The day will not be a washout, but it will start with some unsettled conditions. Highs in the lower 80s. Chance of morning rain about 55%.

• FRIDAY: Morning fog with visibility reducing to less than a mile before 7 a.m. Skies could break for some sun in the afternoon. Very sticky. Highs in the lower 80s and wind off the ocean means no bugs. An isolated PM thunderstorm can't be ruled out. Chance of rain 30%.

• SATURDAY: Low pressure along a slow moving front lags a bit, producing clouds and a chance of showers in the morning, clearing for the afternoon. Good beach weather after 1 p.m. The humidity will breakb later in the day. Highs in the upper 70s. Chance of morning rain about 60%. Not a washout of a day, don't cancel those plans outside!

• SUNDAY: Wall-to-wall sunshine with some PM clouds. Much less humid with bright skies and pleasant temperatures in the lower 70s. Chance of rain 0%.