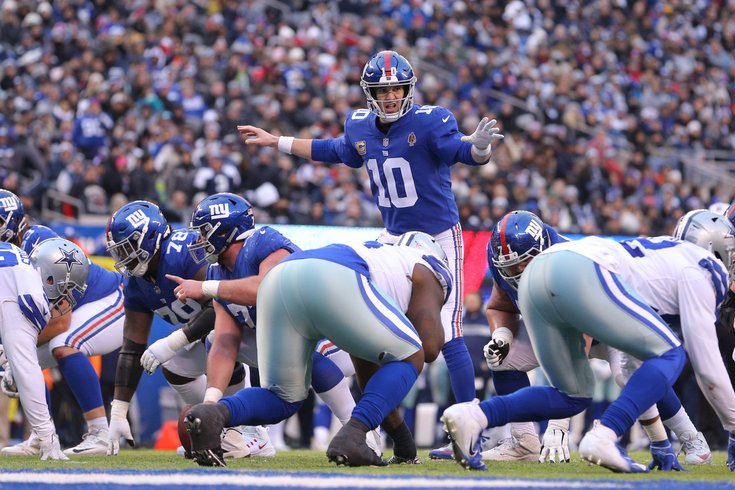 Sunday will be one of two times this season that Eagles fans will learn what it's like to have to root for Eli Manning.

In past seasons, Philadelphia Eagles fans generally rooted for their own team, and kept an eye on the rest of the NFC East. Ever since they won their first Super Bowl, and now that they are consistently contenders to represent the NFC in the Super Bowl, it's perhaps worth keeping tabs on the conference, as opposed to just the division.

And so, each week we'll lay out a rooting guide for non-Eagles games on the NFL schedule, and yes, I'm aware that most of the below is obvious.

• Giants at Cowboys: The Cowboys are the biggest threat to the Eagles in the NFC East, and obviously, the Eagles have owned the Giants over the last decade or so. A Giants win would be a very favorable outcome for Philly.

• Rams at Panthers: Clearly, the better outcome is if the Super Bowl contending Rams are dealt a loss.

• Texans at Saints: Obviously, anytime an AFC team is facing an NFC team, the AFC team winning is the better option. In this case, the Saints are a likely obstacle for the Eagles if they are going to make it back to the Super Bowl.

• Bengals at Seahawks: See AFC-NFC explanation above. The Seahawks are fringe contenders.

• Falcons at Vikings: It's debatable which of these two teams is better. I'll go with the Vikings, so I say with no conviction whatsoever that it's maybe better if the Falcons win this one.

• Lions at Cardinals: In terms of which team has a better chance of eking into the playoffs instead of some other more talented team, I would give the nod in this case to the Lions, so maybe it's better if they put a win in the books? But really, this is a near-irrelevant game to the Eagles.

• Ravens at Dolphins: With Washington (and to a lesser extent, in my view, the Giants) likely to contend for a top five draft pick, the more games the tanking Dolphins lose, the better. While neither the Giants nor the Washington team necessarily need to draft another quarterback immediately after taking one each in the 2019 NFL Draft, a No. 1 overall pick could be worth an extreme draft pick bounty to a team that needs one, you know, like the Dolphins. It's better for the Eagles if a few QB-needy AFC teams land the top draft spots.

• Bills at Jets: It doesn't matter which team wins this game, but it's interesting to keep an eye on, as the Eagles play each of these teams somewhat early in the season.