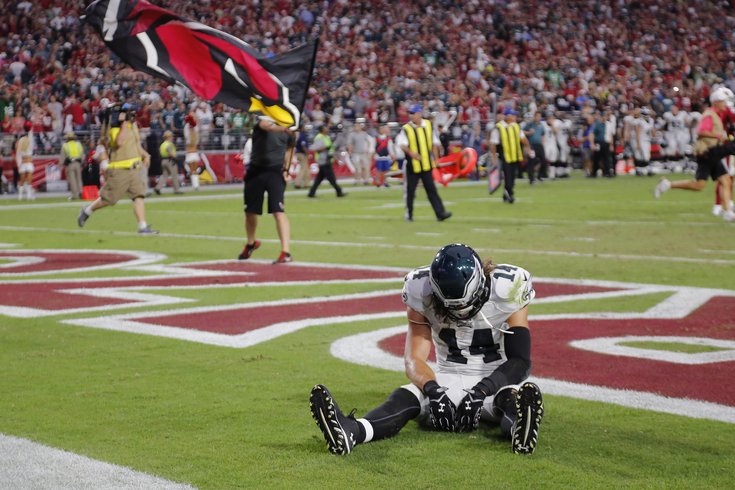 The Eagles play the Cardinals every year, it seems. Last year, they lost in Arizona. I expect them to do the same this year in Philly.

For the gambling degenerates, here are my Week 15 picks. To note, the helmets indicate who I think will win the game, not cover the spread. At the end of the picks, I'll note a few teams that I like based on the spread.

Buccaneers at Rams (-2.5): Holy hell, what a terrible Thursday night game. I think the Bucs are one of those "done but still try teams" that will play with enthusiasm down the stretch, as they have a charismatic, competitive quarterback with a future, while the Rams... don't.

Jets (-3) at Cowboys: Is Matt Cassel still the starting quarterback?

Bears at Vikings (-5.5): The Vikings would have to have a complete collapse not to make the playoffs, but after losing two straight games (to good teams in the Seahawks and Cardinals), this is a really important game for them.

Falcons at Jaguars (-3): The Falcons currently have the longest losing streak in the NFL at six games. No other teams has a current losing streak longer than two.

Texans at Colts: There's no line on this game yet because of the Colts' ever-unknown situation at quarterback. For me, it doesn't really matter who plays. I think the Texans are simply a better team.

Bills (-1) at Redskins: Two weeks ago, the Redskins had won five straight at home, and were 0-5 on the road. Over the last two weeks they won on the road and lost at home. Typical uncooperative Redskins -- They won't change their offensive team name or be consistent in their home/road tendencies. Still, I'll take them over a deflated Bills team whose season ended last week.

Chiefs (-7.5) at Ravens: As we noted over the last three weeks, Big Red is on fire. The Chiefs' last seven games:

OK, so that last Chargers game was an ugly win. Still, the combined score over that span: 204-84. They are +120 over that span. I'll continue to ride the hot hand ... until Andy inevitably reaches his playoff loss destiny.

Packers (-3) at Raiders: Trap alert -- This is a sneaky little game here. The Packers are almost certainly going to the playoffs at a minimum as a wildcard and are pretty much only playing for the NFC North division at this point, with an outside shot at a first round bye if the Eagles can beat the Cardinals this week. Looking ahead at the Packers' schedule, they have the Cards Week 16, and a Week 17 game against the Vikings that could decide the division. I'll take the Pack here, but I do wonder if they can't help but look ahead.

Dolphins at Chargers (-2): This feels like a good place to show what teams are jockeying for draft position. Here's what the draft order would be, if the season ended today:

Bengals (4.5) at 49ers: This line is only 4.5 because the Bengals are rolling with AJ McCarron at quarterback. Doesn't matter. The Niners are trash.

Cardinals (-3.5) at Eagles: The Cards are one of the most complete teams in the NFL. The Eagles, meanwhile, have sporadic moments on defense and special teams. That's the difference between Philly and the cream of the crop.

Lions at Saints (-3): Ew. The NFL began its week on Thursday with Bucs-Rams, and they're ending it with this crap. At least both teams can put up points, so it will have plenty of fantasy football playoff implications.