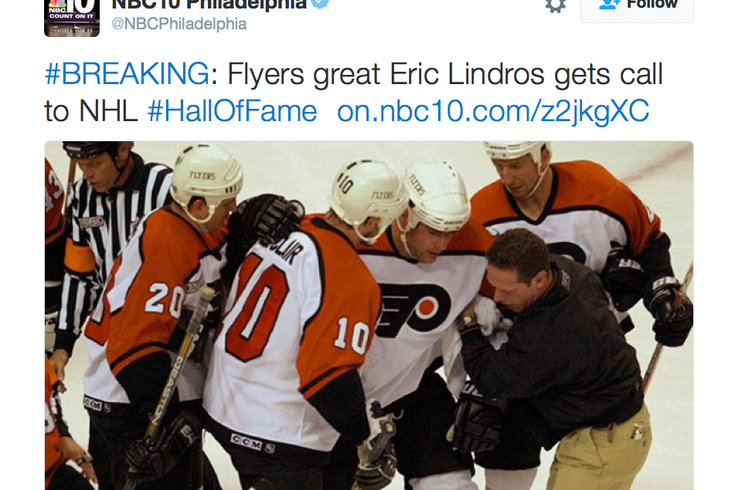 Some poor NBC10 intern probably looked at the thumbnail and thought this was a photo of Eric Lindros celebrating with his teammates after a goal. Turns out, it's more of a just-concussed-type situation. Props to them for not deleting the tweet, though.

Wawa constructs 6-ton, 2-mile-long hoagie for Hoagie Day. Sheetz employee of the month constructs a peanut butter and possum sandwich and eats it behind a dumpster, just like always.

Investigators for PA’s Gaming Control Board file a petition asking that Joey Merlino’s name be added to the casino exclusion list, meaning he’ll no longer be allowed to gamble in the state. “In truth, nobody should be gambling. It’s an addictive vice that often ruins communities and plunges individuals into a life of debt and ruin,” says the Gaming Control Board. “It’s a shame we can only ban people one at a time.”

Milton Street no longer endorses Donald Trump, saying the presumptive Republican presidential nominee “doesn’t think before he talks.” “As for me, I think all the time,” says Street. “It’s usually about a fanciful place where the hot-dog vendor is king, chickens lay marshmallows and there’s a cable station that only plays ‘General Hospital’ all day, every day."

Atlantic City's main casino workers union reaches an agreement on a new contract with four of the five casinos it had been targeting for a strike. “We’ll never sign,” says a representative of the Revel Sewage Dwellers Union. “P.S. We’d like to thank our sympathy strikers, the Showboat Mole People’s Local 642.”

A new report from researchers at Harvard University calls former Philly D.A. Lynne Abraham the fourth "deadliest" prosecutor because of how often she sought the death penalty. And, would you look at that: A bunch of new names just jumped to the top of her kill list.

A 31-year-old owner of a landscaping business in the Northeast owns four of the six permits for protest "zones" in FDR Park during the DNC. “I couldn’t have done it without my corporate sponsors. Let’s hear it for Paddy Whacks, that new Chick-fil-A where I camped out, Barbera on the Boulevard and Milton Street."

The FBI says it’s still looking for leads to find Norman Rockwell’s painting, “Boy Asleep with Hoe,” stolen from a house in Cherry Hill in 1976. “We’d like to thank the public for all the leads they’ve sent us over the years. They’ve been really helpful. You guys are so funny.”

The New York Times says Chris Christie is being vetted as a possible Trump VP. “This isn’t a vetting process. He’s just saying the most hurtful things you can say to a person. I really don’t know how much more I can take,” Christie whispers through a vent at the Taj Mahal. “Plus, it stinks down here. It didn’t use to, but now it definitely does.”

Former Flyer Eric Lindros is elected to the Hockey Hall of Fame. “Welcome to the club,” says Scott Stevens, before delivering a cheap, vicious and currently illegal hug from behind.