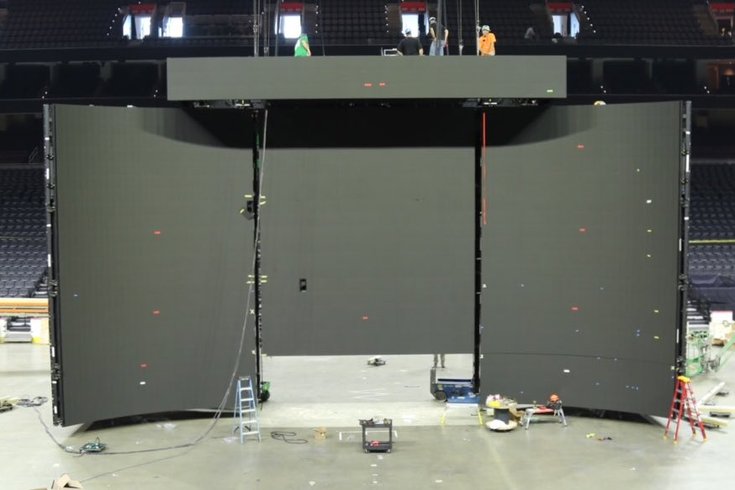 The Wells Fargo Center has started assembling the otherworldly, center-hung, kinetic 4K scoreboard that will be used during the Flyers' and Sixers' upcoming regular seasons.

The Eagles begin the 2019 regular season in less than two weeks, but the focus at the South Philly Sports Complex this week isn't at Lincoln Financial Field.

The Wells Fargo Center welcomed its newest addition this week, the otherworldly, center-hung, kinetic 4K scoreboard that will be used during the Flyers' and Sixers' upcoming regular seasons.

The official Wells Fargo Center social media accounts shared some preliminary images this week, giving us a sense of just how gigantic this scoreboard is going to be:

Yep, that sure looks like a very big scoreboard.

Announced in February, the scoreboard will be 65% larger than the old display, and will be able to transform into multiple configurations while games are ongoing. The display will feature the most square feet of center-hung, 4mm LED video technology in an arena which hosts NBA and NHL games, according to Comcast Spectacor.

That all sounds very space-age. Here's a visual demo of what the scoreboard will look like in action:

Of course, the first sporting event held under the scoreboard that counts for something will be the Overwatch League Grand Finals, on Sept. 29. It seems fitting, considering esports are played on screens, and this is one serious screen.