President Donald Trump likes boasting of the education he received at the University of Pennsylvania’s Wharton School of Business, and how he’s “like, a smart person” because of it.

People affiliated with his alma mater continue to speak out against his moves, though.

Already, the school’s paper has spoken out about the “institutional dilemma” that will require the university to take a consistent stance on its relationship to Trump.

This week, a group of Penn students crafted an “open letter condemning President Trump's executive orders on immigration and refugees.”

Posted online Tuesday morning, it topped 2,700 signatures by 11 a.m. Thursday. The letter writers deemed it an important move “in light of the fact that we are Trump’s alma mater and that of his children,” said Clifford Marks, an MD/MBA candidate at Wharton.

They plan on marching from the University City campus to U.S. Sen. Pat Toomey’s Center City office to hand deliver a copy of the letter, and the supporters’ signatures, next week, likely on Wednesday.

Marks said a core group of about 15 students brainstormed via email the weekend after Trump announced his controversial executive order that drew thousands to protest at Philadelphia International Airport.

It came together rather quickly amid discussions about “the best way to articulate our vision and stand up for shared values,” he noted.

“I think we all felt a responsibility to make clear that these are not really the values we’ve learned at Penn." – Clifford Marks

“Many of us were either affected by this, or friends with people who were. They have family members who can no longer visit. They’re concerned about what their work status might be down the road,” he explained Thursday. “Penn is a fairly diverse institution. A lot of people come here from other countries, get an education and give back to the United States.

“There’s been a lot of fear on campus that President Trump is fundamentally altering the vision of America that we all have.”

While it started as Wharton-focused, organizers have started branching out to get support from students in other schools amid the Penn educational community. They maintain theirs is a particularly important voice because of the Trump family’s extensive ties to the school.

“I think we all felt a responsibility to make clear that these are not really the values we’ve learned at Penn, that we came to Penn to learn, and that they’re antithetical to everything we hold dear,” Marks said. “We really wanted to make clear the depth and breadth of our opposition on this campus.

“It’s not just coming from liberal corners; a place like Wharton has more conservative representation than other schools at Penn. From top to bottom, this is something we want to express.”

It takes on a personal feel for Naveed Amalfard, a first-year MBA student at Wharton. While he's an American citizen, his grandmothers are green-card holders from Iran and a cousin is here on a student visa.

He said Trump's words and actions not only affect people he cares about, but they take on even heavier implications.

"This time, he's literally trying to change the complexion and composition of the American citizenry," he said. "With my grandmothers, it was unclear for a while whether they could come visit my family. My cousin is potentially stranded here; he can't visit his parents and they can't visit him."

He lauded his fellow students who "saw the effects this ban has had on families all across the country and stepped into action." 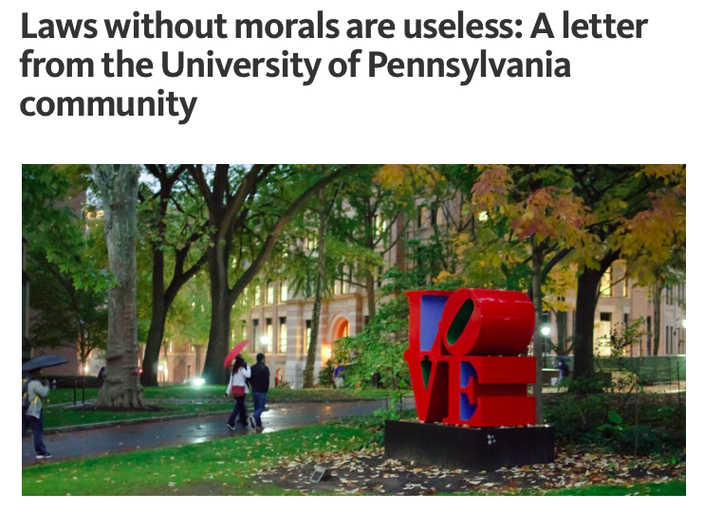 A group of University of Pennsylvania students crafted a letter to rebuke President Donald Trump's executive order that's been deemed a 'travel ban.'

The text of the "Laws without morals are useless" letter can be seen below:

We are outraged by President Trump’s immigration bans, and we believe you should be, too.

We are students, faculty, scientists, administrators, and alumni of the University of Pennsylvania. We traveled here from across the United States and around the world to work, study, and learn from peers we would have never encountered at home.

We follow those who first did so 275 years ago, in an abandoned schoolhouse at the foot of Independence Hall, to begin a new type of higher education — one that would teach them the tenets of civic responsibility, rather than the rules of the church.

We condemn the fear, anger, and political self-interest at the heart of President Trump’s actions. We reject the claims he makes in the name of our safety.

We embrace our colleagues and classmates separated forcibly from their families overseas, and we stand in solidarity with those whose lives our leaders have placed in grave danger.

We expect the country that welcomed our families to reclaim its strength and embrace its role as a home for those who seek freedom from tyranny.

President Trump’s immigration bans displace our classmates and separate us from our teachers and friends. We demand that you, as our representatives, work to block and overturn these orders and other policies that run counter to American values. We insist that you withhold your consent to the appointment of judges and officers of the United States, especially nominees to the Supreme Court, who would support similar policies that discriminate on the basis of race, religion, and national origin.

As our University’s motto notes, laws without morals are useless. Freedom of expression, association, and belief are the moral bedrock of our nation’s laws, as well as the foundation of our community. When those and other freedoms are threatened, we will not be silent or silenced.

We are ready to fulfill our civic responsibilities and protest injustice. We hope you are, too.