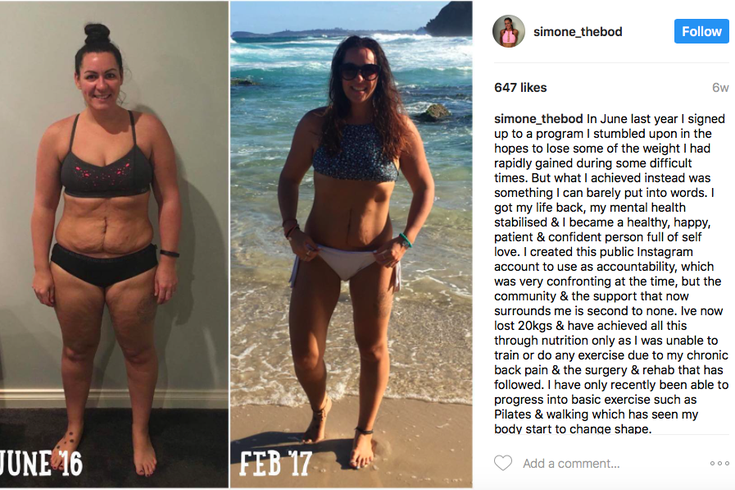 Simone Harbinson, who battled cancer among many ailments, is the subject of a Cosmopolitan magazine story that rankled many social-media user's sensibilities.

Keeping up with everything on Outrage Nation’s daily agenda can be downright impossible sometimes. Other times, trying to draw readers toward a particular story breaks through the muck and warrants every bit of disdain thrown its way.

This is one of those times.

It all started with a (since-deleted) tweet from Cosmopolitan magazine designed to draw attention to a story (previously) billed as “How This Woman Lost 44 Pounds Without *ANY* Exercise.” 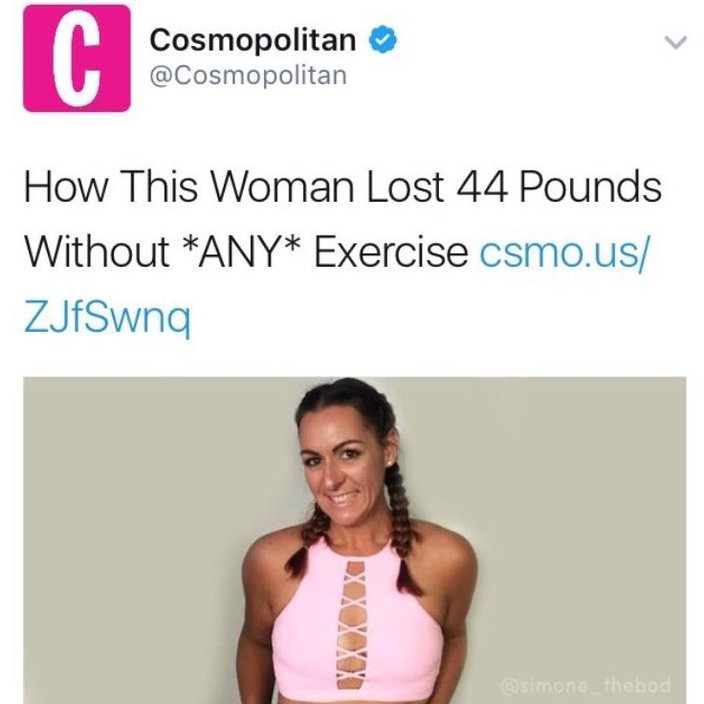 That is the type of line that's sure to garner attention. I mean, who wouldn't want to drop a few dozen pounds without having to go to the pesky gym or on an unappealing diet?

Well, I mentioned the phrase “(previously) billed” because over the course of the past two days, the story's headine has been changed to “A Serious Health Scare Helped Me Love My Body More Than Ever” and the initial tweet promoting it has been deleted.

Those alterations resulted from the sort of backlash one would expect when a publication seemingly treats cancer as a primo weight-loss strategy. (See here, here and here.)

Yep, 31-year-old Simone Harbinson of Melbourne, Australia dropped those 44 pounds, alright. And to tell readers how, the story starts with a nod to having “complicated relationship with her body” before noting that “her weight-loss journey was overshadowed by a waterfall of health scares.”

In lieu of exercise, she battled “several life-threatening setbacks” and lost weight. This "approach" to slimming down included a severe kidney infection, a malignant carcinoid tumor of the appendix, the removal of part of a colon, infections and a partial lung collapse.

Obviously, cancer has brought pain and loss into countless families around the globe. And obviously, Harbinson's battle weaves a tale of bravery as she overcame steep medical odds.

So what’s the issue here?

Well, when you lure readers with – as magazines are wont to do – weight-loss strategies before summer rolls around, it’s not exactly classy to inadvertently note that one would have to get cancer to drop the pounds in Harbinson's no-exercise program.

Exactly zero readers delved into that piece and walked away thinking, “You know what, the perfect bikini body is worth going through all that.”

It’s one thing to employ the "present story in form of a question on social media to draw readers in" model. I've done it from time to time. Most people in this field have.

But it's something altogether different to stoke interest in utilitarian weight-loss strategies by shielding the horrors necessary to get there.

That Harbinson was able to fend off body image issues is an important point to make, but not at the expense of cancer-shielding, click-baity social-media marketing.

Make sure this doesn't happen again, writers and publishers of the world.