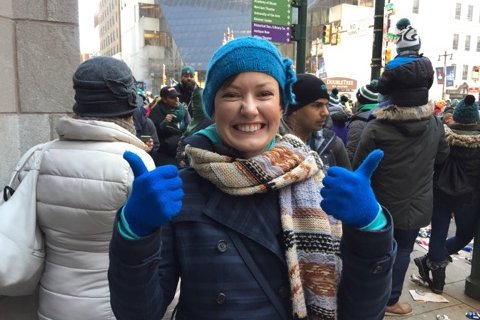 Anna Watters, of Australia, at the Eagles Super Bowl Parade.

Anna Watters couldn't have picked a better time to move to Philadelphia.

Watters, 34, came to the city a year ago to work on her postdoctoral degree in neuropsychiatry. Originally from Australia, she only has five months left in the city.

While her time here is limited, she's lived in Philly during a time when the city enjoyed the best season in its professional football team's history.

"It feels like such a point in history to be in the States right now and Philadelphia of all places," Watters said while watching the Eagles Super Bowl victory parade Thursday from Locust Street. "It's really cool."

Does the jubilation compare to anything in her homeland? She replied bluntly: "No."

"Australians love sports, cricket and (Australian) football is really big over there," she said. "But just something of this size, I was really curious about coming to see, and I was not disappointed."

Asked about her impression of Eagles fans, she hesitated, as if not to say the wrong thing about the throngs of people surrounding her amid a sea of empty beer cans and green attire.

"It's entertaining when it gets a little out of hand." (Author's note: That's an understatement.)

All in all, her Philly experience has been a good one.

"I love Philadelphia. I didn't know what to expect, I didn't know a lot of people coming here. Philly has been a wonderful place to live."