What they're saying about Ryan Howard: Nothing good, that's for sure 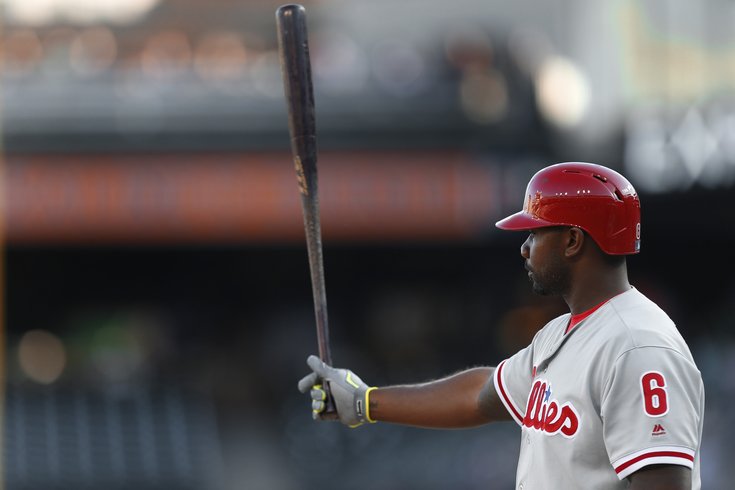 Phillies first baseman Ryan Howard was barely able to keep his batting average over .100 for the month of May.

UPDATE [5:05 p.m.] -- Phillies manager Pete Mackanin announced prior to Wednesday night's game against the Nationals that Ryan Howard is headed to the bench for at least the next three to four games in order to give Tommy Joseph an extended chance to prove he should be the everyday first baseman.

Our own Ryan Lawrence has more, including Mackanin explaining the decision and the full transcript of Howard's reaction, which included some words of encouragement for Joseph. READ HERE.

Given that Philadelphia Phillies first baseman Ryan Howard just wrapped up the worst month of his 13-year career on Tuesday night with an 0-for-3 performance, the generally negative tone of this post shouldn't come as a surprise.

But let's make a few things clear up front...

•  It's not Howard's fault that he's making $25 million dollars this year. What, did you expect his agent to tell Ruben Amaro, "Thanks, but I feel like my client isn't going to age well, so let's shave a few dollars off the back end of the contract to make it more team friendly?"

•  It's not the current front office's fault that they're saddled with a player-contract combination so bad no one wants to give them anything in return for taking it off their hands. When the deal was consummated, there was no way to foresee it being this bad. Speaking of...

•  It's not Amaro and the previous regime's fault -- at least not entirely -- that Howard suffered a catastrophic months after he signed a five-year, $125 million extension. Should they have known that power hitters in the post-steroid era wouldn't age like, say, Barry Bonds? Probably, but they couldn't have predicted the Achilles tear. Could they have negated some of that risk by promoting Howard to the big club and making him their everyday first baseman earlier than 2005? Again, yes, but that would have also meant more miles on his proverbial treads by the time he signed that extension.

•  It's not Pete Mackanin's fault for trying to get whatever's left out of his 36-year-old former MVP. Howard is, by far, the most decorated player on the team, even if he hasn't been that for quite some time. Benching him full-time won't help draw any interest from opposing GMs. But it's nearly impossible to break out of a slump -- if that's what you want to call hitting .154 through the first two months of the season -- when you're only playing every few days.

All that, however, doesn't mean everyone is blameless. Everyone involved in this -- including the fans -- need to share in the blame. Yes, ultimately this is on Howard for underperforming, but you need to separate the contract from the numbers that actually matter, the ones he can, or at least should be able to, control -- the statistics.

And to be fair to those ripping Howard unmercifully, those numbers are awful.

But once you accept that the money negotiated on the front end (based on what the organization thought the slugger was worth) can't be changed now, the Phillies first baseman transforms from a Gollum-esque villain consumed by his preciouses -- in this case, paychecks -- to a much more sympathetic and misunderstood Smeagol.

As someone said to me over Memorial Day weekend, "I just want to give Ryan Howard a hug."

Unfortunately for him, that's not how most people are thinking. Let's take a look at what's being said in the media about Howard, starting with our own writers.

In July of 2014, Ryne Sandberg benched Howard for three games. ... But on the third day of Howard’s benching, Amaro emerged to meet the media. He defended Howard, said it was just one bad month “people were focusing on” and said he “fully expected” Howard to be the team’s starting first baseman at the start of the next season, 2015.

What Amaro and the front office actually did wasn’t defend Howard; they undercut any control Sandberg had over his roster and in his clubhouse.

The Phillies cannot let history repeat itself with Mackanin, who deserves better after getting this team to play as well as they have seven weeks into the season.

What's next for Howard after nightmarish month?

“Everything is a factor,” Mackanin said when that very point was shot back at him. “You consider everything. Age has to be a factor. Let’s put it this way, I’m not at the point where I’m giving up on him. I’m not going to give up on him. I’m hoping that he’s going to come out of it.”

Mackanin said he has not spoken to Howard about the issue recently because nothing has changed. He’s still working Howard into his regular lineup, while also making sure he (and the front office) gets a look at Joseph to see what he can do at the major league level, too.

Why is Ryan Howard still on the Phillies?

When the team’s new brain trust came together over the past year, with Andy MacPhail as president and Matt Klentak as GM, the message was clear – out with the old, in with the new. Sentiment would no longer govern decisions. Goodbye, Chase Utley, Cole Hamels and Jimmy Rollins. Sayonara, 2008.

Howard has survived the purge for two obvious reasons. He is owed, even now, over $25 million on a contract USA Today last week proclaimed the worst in baseball history. And the other reason is even more telling. No other team wants him, at any price.

And now, the rest of the Philly media...

What should the Phillies do with Ryan Howard?

This is a business and while organizations should handle their players with respect, there's no reason why sitting Howard on the bench more than a few times a week should be considered disrespectful given his performance.

Mackanin said upper management doesn't tell him whom to play but it wants Joseph mixed in against right-handers so he doesn't "stagnate."

What should the Phillies do with Tommy Joseph?

The idea of making sure Joseph doesn't "stagnate" on the bench is a good one, but he's not going to get any better and, more importantly, the Phillies aren't going to have a clearer sense of what they have in Joseph, unless he's starting 5-6 days a week.

If Joseph isn't getting 80-85% of the plate appearances moving forward, something is broken.

Howard is stuck in time, unable to return to previous seasons of glory, unable to transport himself a year ahead to what will certainly be his first season of retirement. He is increasingly defined by what he is not, rather than what he is. He is not the regular first baseman any longer. He is not a strict platoon player, either, avoiding only the lefthanded starters who have bedeviled him for some time.

Howard should announce 2016 as final season

Howard is owed respect for a career that will allow him to go down as the franchise's second greatest power-hitter of all-time. It is unfortunate that injuries likely prevented him from being a 500 home run hitter. All of that's true, but it's also true that it's June and Howard is hitting below .200 and the last time that he wasn't in the lineup due to his contractual situation Kim Kardashian was married to Kris Humphries.

So the correct move for Howard now would be to turn what is becoming an increasingly negative situation into a positive, semi-farewell tour to end what has been a very impressive career, somewhat like what Bryant did.

The thing for Howard is that this wouldn't be a move that allows him to temporarily save face. He's done. It's not a situation where he may be done, like his former teammate Jimmy Rollins seemed to face this past offseason. He's done. If teams essentially won't take him for free in trades now, why would anyone be interested in signing him this offseason?

Howard saga has been hard to watch

There's no satisfying answer here. All I can say is I wish for it to be over.

Howard's decline has been one of the saddest to watch in recent Philly sports memory. From 2005 through 2011, he was the heart of the Phillies' order, belting 284 home runs and driving in 859 runs in six-and-a-half seasons, during the most successful run in franchise history. In 2016, Howard's bat can barely catch up to the ball, let alone knock it out of the infield.

Thanks to math (which I have never liked until this moment) we can see in just a small sample size, Tommy Joseph performs better against righties than Ryan Howard.