What they're saying: The Phillies' most valuable trade chips 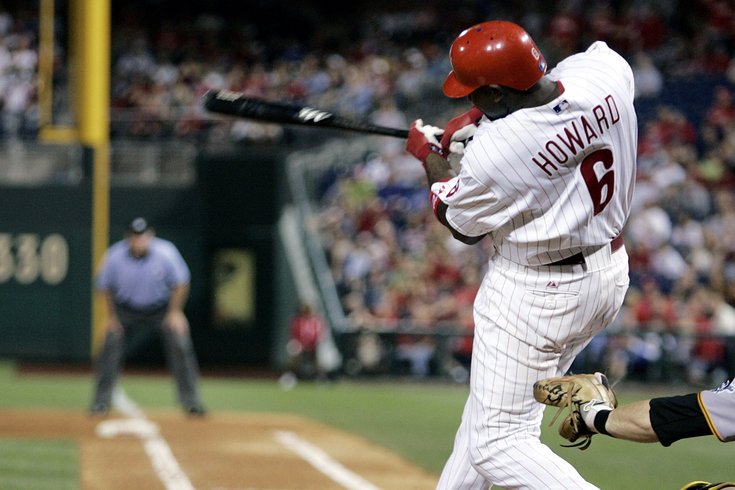 Ryan Howard should be remembered as one of the great athletes in this city's history.

The Phillies recently passed the quarter pole of the 2015 MLB season and currently sit six games below .500 as they go for their ninth win in their last ten games Thursday afternoon against the Rockies.

Their 18-24 record is far from the most important thing for fans to worry about. However, the way they're playing has a direct correlation to one of their major goals this season, trading away some veteran pieces in order to acquire prospects, unload payroll and allow their younger players — see: Maikel Franco — to get some MLB experience.

The season didn’t get off to a good start for general manager Ruben Amaro, who was unable to deal starter Cole Hamels, arguably the team’s most coveted asset, despite multiple reports of interested potential suitors, like the Red Sox and Cardinals. Just a month ago, Ryan Howard was homerless, Hamels was winless, Chase Utley was* a shell of his former self, and the team was just 3-8 through its first 11 games.

*He has been most of the season, however it would be unfair to mention the fact that he is hitting .438/.550/.688 with four doubles and four walks in his last five games.

Since then, the Phillies have been more or less playing .500 ball, going 15-16 and climbing out of the NL East cellar in the process. More importantly, though, is the fact that some of their potential trade chips are performing at very high levels.

Others, not so much. But they all likely have some value on the open market. The challenge for Amaro and the rest of the front office will be to get the most in return for that value. They must be stingy, but not greedy. Cautious, but not afraid.

With that in mind, let’s take a look at some of Amaro’s trade chips whose stock is rising with the deadline just over two months away...

Aside from Freddy Galvis, who is hitting .324 this season, the first baseman has been arguably the hottest hitter on the team in the last month. He'll need to keep it up if Amaro has hopes of dealing the massive contract that would go along with acquiring Howard.

Here's a look at some of his numbers since he hit his first home run one month ago today:

According to Ryan Lawrence of The Daily News, only five players in baseball have hit more homers than Howard since that date. They are:

And his numbers don't just stack up against other players. They're the best they've been for the slugger since August of last year:

All this obviously means Howard's stock is on the rise, but just how much his monstrous contract will hinder trade plans is still a relative unknown. More from Lawrence:

With the trade deadline a little more than a month away, the front office’s efforts to move the remaining parts will reach a fever pitch soon. The Phillies will be baseball’s most aggressive seller, and contending teams could do a lot worse than adding a Cole Hamels, Aaron Harang or Jonathan Papelbon to their pitching stable in hopes of a postseason run.

And then there’s the case of Ryan Howard, the once-immovable big piece.

The combination of a massive contract and declining skills made it impossible for the Phillies to find a taker over the winter, despite their best efforts. Six-plus weeks into the 2015 season, Howard’s stock could be on the rise. [...]Howard, 35, is still owed $35 million after this season. But if the Phillies help bridge the gap in salary, which the front office has said it would consider in any trade, the first baseman’s bat once again looks as if it could help a team in need of a power upgrade.  [philly.com]

It's funny what a difference a month can make. Suddenly, Howard no longer looks un-tradeable, although that in no way means a deal is guaranteed to get done.

Revere has played all over the outfield for the Phillies this season. Some could see that as a plus, but without a permanent position and the expected return of Cody Asche and Domonic Brown -- remember him? -- Revere could find himself being dealt for prospects. Complicating matters further is the fact that Rule 5 pick Odubel Herrera must remain on the 25-man roster throughout the season or else the Phillies could lose him.

According to Todd Zolecki of MLB.com, however, the Phillies and Angels have already discussed a deal involving the speedy outfielder:

[Asche and Brown] will rejoin the Phillies at some point, possibly soon.

It is safe to say the Phillies are seeking Minor Leaguers in return.  [mlb.com]

The move makes sense for the Angels as a way to spell struggling outfield Matt Joyce (.155 avg). Acquiring Revere also comes with the added bonus of having him under team control through the 2017 season. After struggling out of the gate this year, Revere has returned to form over the last 25 games.

Via baseball-reference.com, here's a look at his numbers over that stretch and how they would extrapolate over a full season:

Not a bad option for a contender in need of an outfielder.

After a rocky start in which Hamels allowed seven home runs over his first 18 innings, going 0-2 in those three starts, the 31-year-old lefty has done nothing but help himself punch a ticket out of town.

In his last six starts, Hamels is 4-1 with a 2.45 ERA, giving up just one home run and striking out 44 batters in 40.1 innings of work. So far, it would seem that Amaro's decision not to deal Hamels this offseason is paying dividends. Or it will, as soon as he actually gets around to trading him.

It's beginning to seem more and more like it's simply a matter of when, not if, Hamels will be traded. And according to MLB.com's Tracy Ringolsby, the Phillies ace is just what contenders will be looking for:

If a top-of-the-rotation left-hander is on the wish list, Cole Hamels is alive and well, pitching for the Phillies. And the asking price isn't going down. If anything, it may nudge up a bit every time Hamels takes the mound the way he is pitching. [...]

That's what a contender is looking for, a pitcher with a big-game history who has the maturity to focus on the moment at hand, and not be distracted by the rumors and innuendos surrounding every move he makes. [...]

Hamels also is under control in terms of his contract through at least 2018 at $23.5 million a year, and a $20 million option for 2019 that does carry a $6 million buyout. That's why teams like the Padres, Dodgers, Cardinals, Tigers and Yankees are so often mentioned in connection with Hamels.  [mlb.com]

If Hamels can keep this up, Amaro will be able to demand a quality haul in exchange for his No. 1 starter.

Last week, Papelbon became the Phillies all-time leader in saves when he passed good ol' Joey Table (112), making him just the second player in MLB history to be the franchise save leader for two separate teams.

With Papelbon, it's not as much about his stock being on the rise -- he's been good all year -- as it is about waiting for a team in need. Should a contender lose their closer to injury, look for them to inquire about the 34-year-old-righty. Otherwise, its hard to see a team willing to take on his contract. No one is going to want to pay a set-up man $15 million. Hell, no one wants to pay a closer that kind of money, which is part of the problem to begin with.

For a team that was obviously on the decline, it made no sense to shell out the most money ever for a closer. But that's Amaro's grave, and he'll have to lie in it. Unless of course, he can find a trade partner this season.

According to Corey Seidman of CSNPhilly.com, the Marlins make the most sense, despite the fact that they're a division rival:

So now, Papelbon remains on the trading block, where he has been for several years. The longer the Phillies hold on to him, the cheaper his remaining salary — previously a stumbling block — becomes. Papelbon earns $13 million this season, meaning an acquiring team would be on the hook for a little less than $4.5 million in 2015 salary if a trade goes down at the deadline. (The Phils' closer also has a $13 million option for 2016 that vests with 37 more games finished.)

But why should teams wait until the deadline if so many have needs at closer right now? Monday night was another ugly night for savers, with the Dodgers' Yimi Garcia and the Marlins' Steve Cishek blowing ninth-inning leads in Los Angeles, the Reds' Aroldis Chapman taking a loss, and Pirates closer Mark Melancon allowing a solo home run to Odubel Herrera in a game he entered with a two-run lead.

Few teams in baseball are completely comfortable with their ninth-inning situation. The Blue Jays are not. Neither are the Indians. The situations for the Pirates, Cubs, Diamondbacks, Dodgers and Rockies remain shaky. The Nationals' bullpen has performed adequately, but they lack the sort of depth they've had in recent years, and you've got to believe they'll address that at some point.  [csnphilly.com]

What a pleasant surprise the 37-year-old righty has been for the Phillies. Considering his relatively low cost and how well he's been pitching, the Phillies should look to move him as soon as possible.

At his age, you never know when an injury could pop up. Furthermore, you risk having him regress to the mean and decrease his trade value. Buy low, sell high, right? Then there may not be a better time to move Harang. And according to Anthony Castrovince of SportsOnEarth, it's Harang, not Hamels, drawing the most interest from potential suitors:

The Phillies rotation member getting the most traction in early trade talks?

Forget Cole Hamels. It's Aaron Michael Harang, whose next start comes Thursday against the Pirates.

Obviously, with Harang, who is only under contract for one year and $5 million, the value equation is a lot less difficult to decipher than it is with the pricey Hamels. And just as obviously, a contending team would be looking to acquire Harang as a back-end innings eater, not a front-line ace.  [sportsonearth.com]

I wouldn't be shocked if Harang is the first domino to fall. It has to start somewhere, right?