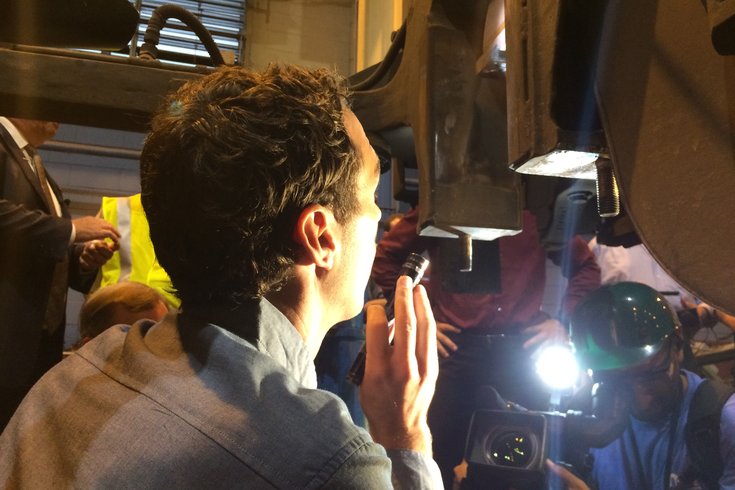 Greg Buzby, senior project engineer at SEPTA, examines a crack on an equalizer beam of a Silverliner V.

SEPTA opened the doors of its Overbrook Maintenance Facility in West Philadelphia to members of the media Thursday morning to display some of the cracks that have been found on nearly all its 120 Silverliner V railcars.

Members of the media – all wearing green safety helmets – were able to view the undercarriage of a Silverliner V, as well as examine a suspension system detached from a train. The exercise made it clear that the cracks on the equalizer beam – part of the suspension systems –are small and hard to find.

The cracks were detected on 95 percent of the 120 Silverliner V passenger cars purchased from Hyundai Rotem of South Korea. Only five trains showed no evidence of similar damage.

According to Ron Hopkins, assistant general manager of operations for SEPTA, access was granted to the media to give the public a better view of the defect that has sidelined a third of its cars – the equivalent of more than 13,000 seats – and created a summertime commuting nightmare on the Regional Rail lines.

"We want people to understand the challenge to find these cracks," he said. 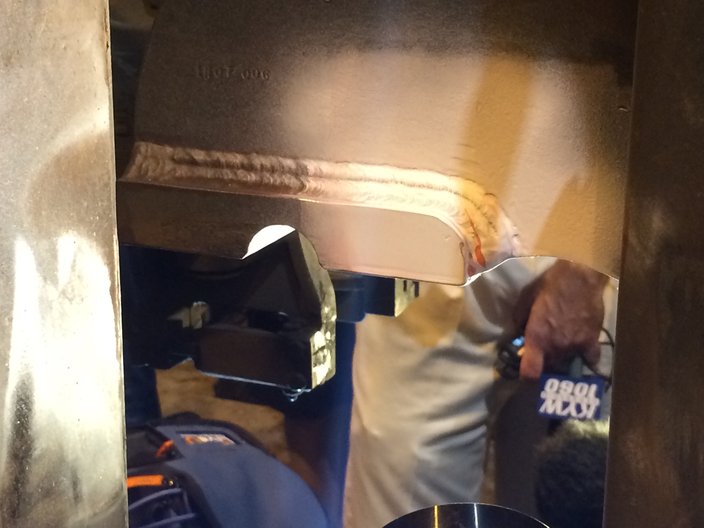 This image shows a red mark where dye highlights a crack in an equalizer beam on a disassembled suspension system of a Silverliner V. Similar cracks have appeared on 95-percent of SEPTA's fleet of Silverliner V trains.

The big questions Thursday were what caused the cracks, how can the equalizer beams be repaired and how long will it take to get the sidelined cars rolling again.

"We aren't there yet," Hopkins said. "We are still doing technical testing. It's really to plot our path forward."

Metallurgical testing will determine if the welds or the materials used in the beams could have caused the cracks, he said. The suspension systems of the trains will be shipped to a third party for testing. Hopkins didn't say where they would be tested, but noted that SEPTA might have more information as soon as next week.

Under a raised Silverliner V train at the facility at 53rd and Jefferson streets, grime and dirt lined the undercarriage while a SEPTA maintenance worker shined a flashlight up through the mechanics of the 73-ton train, while he pointed a small rod into the suspension system to point out a hairline crack in an equalizer beam.

Nearby, Greg Buzby, a senior project engineer at SEPTA, pointed to cracks on an equalizer beam on a suspension assembly that had been removed from another train.

Separating one of the assemblies from the train takes about 20 hours, he said. 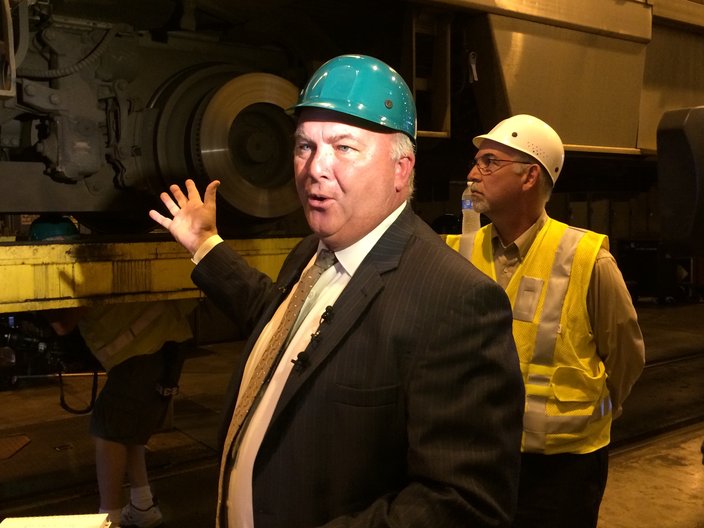 Ron Hopkins, SEPTA's assistant general manager for operations, walks aside a Silverliner V train car is on a lift in a maintenance bay at the SEPTA maintenance facility in Overbrook.

To find the cracks, SEPTA workers treat the affected area with a dye that Buzby said "gets sucked up into any crack," highlighting the problem area. On the first train where cracks were discovered July 1, Buzby said, the damage to the equalizer beam was severe enough to cause to the train to lean noticeably.

But less severe cracks don't cause a train to lean, making the problem harder to notice. About 90 percent of the cracks SEPTA mechanics have found are "hairline" fractures, Buzby said.

"This crack is larger than we have typically seen," said Buzby, pointing out dye on a cracked beam at the maintenance shop.

Asked what might cause a similar crack – or why these cracks all appear in the same locations, near equalizer beam welds – Buzby said, it's too soon to know for sure.

"We are still learning a lot about the cracks," he said. "Right now, we just see a line on the surface ... We still need further testing."

Along with sending the trucks – the wheel assemblies in the suspension systems – out for metallurgical testing, Hopkins said SEPTA will also conduct fatigue tests on the good – or perhaps some new – equalizer beams, to see how the "stresses and strains" of use effect them.

Buzby reiterated what SEPTA had announced last week, that repairing the equalizer beams is impossible. All the damaged ones will need to be replaced.

Hopkins said SEPTA isn't sure what will be done to fix these suspension systems and get these trains back up and running.

But, he said, SEPTA is hoping to have as many as five of the Silverliner Vs back on the rails by Labor Day, even if SEPTA needs to achieve it by swapping usable parts between trains to make it happen.

"There's a lot of work still to be done," he said. "We will continue to put as much service out there as possible."