11,000 people at White House gives glimpse of what crowds will look like in Philadelphia 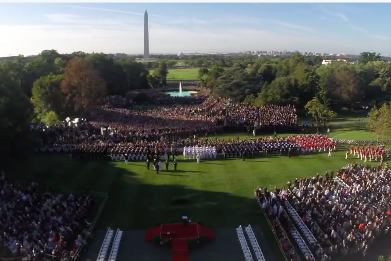 Time-lapse video from the White House, where 11,000 people gathered for Pope Fancis' visit.

Want a glimpse of what things will be like in Philadelphia this weekend when Pope Francis rolls into town?

Take a look at this time-lapse of the pope's visit to Washington, D.C. earlier this week, posted in a tweet from the White House.

Watch a time-lapse of the Pope's visit from the top of the White House → http://t.co/LJG9gY1PiX #PopeInDC https://t.co/BjhbCyk8vn

The event drew 11,000 people during a day in which Pope Francis, joined by President Obama, touched on issues including climate change, immigration and poverty.

Crowd size estimates for Philadelphia this weekend are as high as 1.5 million people. While the FAA's flight restrictions on drones during the papal visit will limit certain aerial views, it would be a worthwhile piece of history to have something similar recorded in Philadelphia.