In wild week at White House, Trump wasn't the only one firing 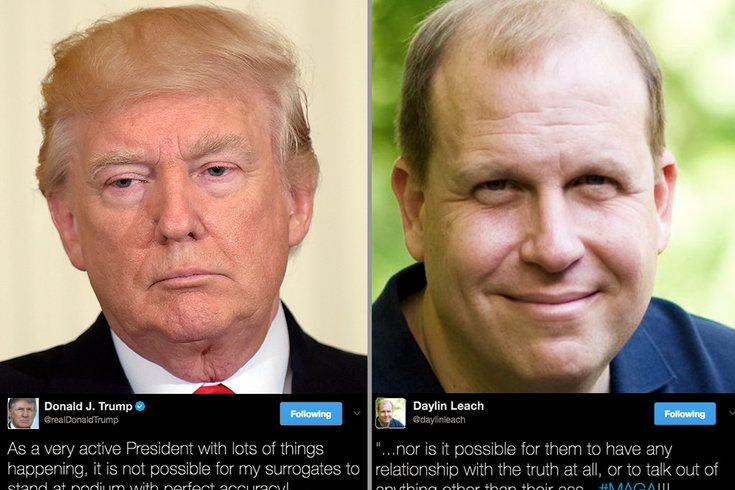 It was everything state Sen. Daylin Leach could do to keep up with the events swirling around President Donald Trump this week. But he fired away with enough colorful phrases and pointed criticism on Twitter to bolster his reputation as a straight-talking politician.

The Montgomery County legislator, who has characterized Trump as a "fascist, loofah-faced, s**t-gibbon?', was busy on the social media platform injecting his in-your-face commentary on the news of the day – "Trump fires FBI Director Comey" – and in response to Trump's own tweets – "When will the Fake Media ask about the Dems dealings with Russia & why the DNC wouldn't allow the FBI to check their server or investigate?"

Here's a sampling of the senator's best tweets – and where necessary, the Trump tweets that elicited a response – from past week:

Why is it that the Fake News rarely reports Ocare is on its last legs and that insurance companies are fleeing for their lives? It's dead!

Better ?: Why doesn't Fake News report you haven't read anything longer than "Goodnight Moon" in your life & know nothing about #healthcare? https://t.co/46WJkDg6BE

Great jobs report today - It is all beginning to work!

If by "work" you mean "Obama's policies", & if by "beginning" you mean "until your policies pass", you are spot on my narcissistic nectarine https://t.co/OOAYCDEsEt

When will the Fake Media ask about the Dems dealings with Russia & why the DNC wouldn't allow the FBI to check their server or investigate?

Wow. Projection much? "Why won't fake news talk about how Dems won't divest their hotels, grope women & have a yellow ferret on their head?" https://t.co/5lMSHU1Ycv

Does an insane, lying, treasonous, sunflower-colored manchild Prez get you down? This will put life in perspective. https://t.co/M7xQDEujCt

Trump's firing of #COMEY & recent tweets show he is seriously losing it. I hope the nukes are in hands of someone more stable. Like Kanye.

Dems have been complaining for months & months about Dir. Comey. Now that he has been fired they PRETEND to be aggrieved. Phony hypocrites!

This moron says "just pray away your addiction". But I know prayer doesn't work. I've prayed that Trump moves to Figi. But he's still here! https://t.co/reNxAy9bx6

As a very active President with lots of things happening, it is not possible for my surrogates to stand at podium with perfect accuracy!....

"...nor is it possible for them to have any relationship with the truth at all, or to talk out of anything other than their ass. #MAGA!!! https://t.co/Ppp1USU2WQ

There is a unanimous Supreme Court decision requiring a President to turn over secret WH tapes. Subpoena #tapes now! #Comeygate