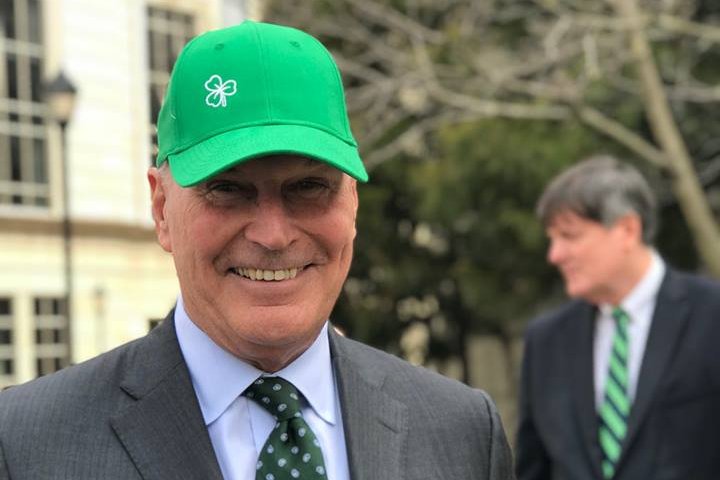 Mike Purzycki - Mayor of the City of Wilmington/Facebook

The situation began with a tweet from the mayor's account of a photo of Purzycki with Sen. Chris Coons and Gov. John Carney at Wilmington's St. Patrick's Day parade.

Another Twitter user then replied to the photo, adding the message "Shout out to all the Irish people who's (sic) families were enslaved, came to the US for a better life, worked in factories and then got called 'privileged' & blamed for slavery by beta male, soy drinking hypocrites & depressed feminists."

RELATED: Twitter wants to hide how many retweets, likes your tweets receive

The offensive reply came from Twitter user An0maly who has since clarified to Delaware Online, and throughout his Twitter feed, that he is not a nationalist and posted the photo and caption as a joke.

I’m not a nationalist. Not even close. I’m also of Puerto-Rican ethnicity.

Purzycki's office addressed the issue Monday afternoon. John Rago, the chief of staff for policy and communications, told Delaware Online that "someone not associated with our office intentionally set out to connect the mayor to an offensive post. Our office retweeted the original tweet not knowing that the offensive post was attached."

Rago also said the social media manager for the city of Wilmington was in charge of all tweets posted during St. Patrick's Day weekend, including the one in question.

The mayor's office has since described the incident as an "innocent mistake" and that the message was "inadvertently retweeted." Purzycki continued to address the matter on Twitter.

I had nothing to do with the offensive post. We unintentionally compounded the problem by RTing the original post unaware that an offensive screenshot was attached. It's disturbing how social media can be manipulated.