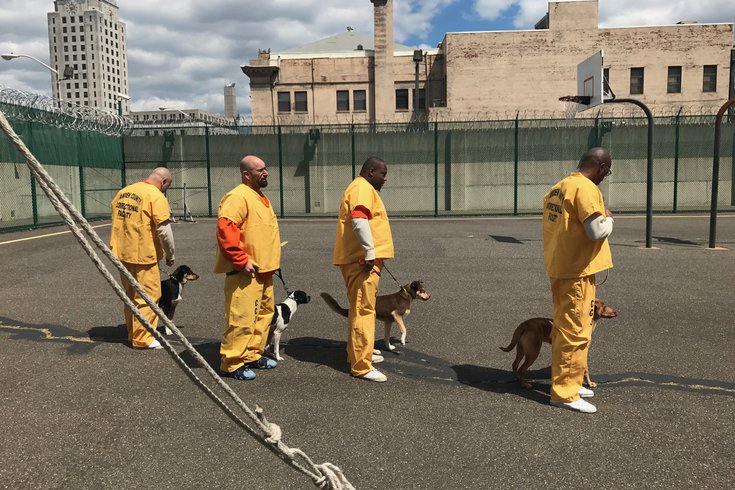 Inmates at the Camden County jail are training rescue dogs as companion animals for military veterans in a new program announced Monday.

Jail inmates will train rescue dogs to match with veterans as companion animals as part of an unconventional new program announced by the Camden County Freeholders on Monday.

There are inmate dog training programs elsewhere in the country, but it's a first for New Jersey.

“The opportunity to have inmates participating and learning a new skillset that will ultimately benefit veterans is a home run for public policy," said Camden County Freeholder Jonathan Young.

Young, the freeholders' liaison to the Camden County Correctional Facility, called it an “innovative way to support both communities.”

And, he added, the program “will also assist us in finding forever homes for animals from our shelter population.

The veterans are being identified by the county Office of Veteran Affairs with One Love Animal Rescue overseeing training.

“We know companion dogs can improve the quality of life for veterans who are suffering from post-traumatic stress disorder, anxiety, or depression,” said state Sen. Jim Beach (D-Camden/Burlington).

In line for one of the trained dogs is Arthur Wimberly, a Bronze Star recipient who was wounded during his service in Vietnam.

Now 67 and ailing with multiple sclerosis, which has put him in a wheelchair after serving nearly three decades in the military, he’s hoping for a mid-size companion animal to “spoil, care for and love.”

He hopes such a dog might help him to remember to “slow down” and care for himself as well as the dog.