Wing Bowl 25 odds: What to expect and why this likely won't be the last one 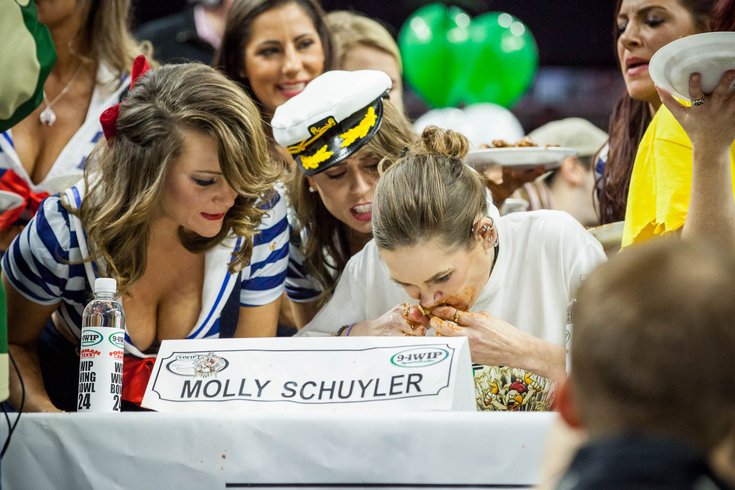 Cataldi, whose contract at the station is set to expire at the end of 2017, told PhillyMag that he was considering retirement after his current deal ends.

Many believed this also meant that Wing Bowl 2018 could be in jeopardy, making this the last one. And while he wouldn’t rule out the possibility of 25 being the last — “25 is 24 more than I figured,” co-host Al Morganti said at the time — he did say that his potential retirement would have little to do with whether or not the annual pre-Super Bowl event would live to see its 26th birthday.

"Wing Bowl will be here long after both Al and I are gone," Cataldi told PhillyVoice back in August. "We have absolutely no say on the future of the event. It is owned by WIP (and CBS) and they have total control over what happens to it. If we had our way, would the next one — the 25th — be the last? Maybe. But since we don’t have that power, everyone can calm down.

"Wing Bowl isn’t going anywhere unless WIP says it is."

Given the lineup they’re rolling out on Friday — not to mention the fact that the Wells Fargo Center is sold out — it’s not likely ending any time soon.

Wrestling legend Ric Flair will be on hand to deliver a "Woo!" or two or ten -- hopefully Jake Voracek and the Flyers aren't within earshot. The Nature Boy will be joined by Coolio and Catching Kelce runner up Veronica Harwood, who will be on hand to help pick this year’s Wingette of the Year, which comes with a $5,000 prize.

And it's a safe bet that we see one or more unannounced special guest show up as well.

There will also be a special five-minute eat-off between five-time champ Bill “El Wingador” Simmons and reigning champ Molly Schuyler, who also won at Wing Bowl 22.

The eating-contest portion of the event will be similar to recent years, with 14 minutes of wing consumption before the field is narrowed to the top 10. After another 14-minute feeding frenzy, the top two eaters will compete for the grand prize in a two-minute “Wing-Off.”

However, no word yet on if there any of them plan to eat a whole cactus ... before the event even starts.

In addition to the main field, there will also be a “Legends” category this year featuring ten Wing Bowl veterans who for one reason or another — in the case of some it was due to large amounts of projectile vomit — have failed to take home the grand prize.

So what is that grand prize?

Here’s a look at the eaters for both categories, as well as their odds for Friday morning (according to WIP).

And if you're heading down but still haven't gotten permission from your boss, they've got you covered...