WATCH: A grown man ate a cactus -- before competing in Wing Bowl 24 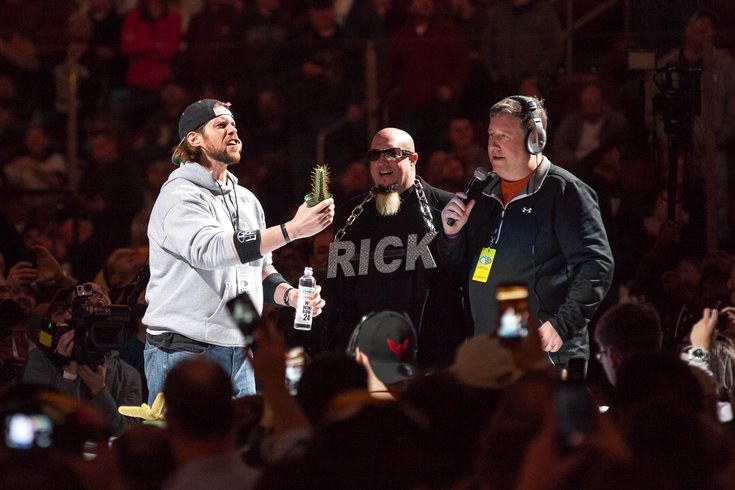 Kevin Strahle, known on the internet and in the competitive eating community as L.A. Beast, didn't even make it out of the first round Friday at Wing Bowl 24. But that doesn't mean he wasn't impressive, even in defeat.

Coming in at 20-1 odds, it wasn't shocking that the 6-foot-1, 240-pounder from California was eliminated early in only his second eating competition.

Like five of his fellow competitors, Strahle vomited was kicked out of the annual gluttony fest. Considering the eating stunt that earned him a spot on stage at the Wells Fargo Center -- eating 24 whole eggs in four minutes -- getting with the "you heave, you leave" chant was something not many expected at the outset.

Even now, he doesn't quite believe that it happened.

I was "ejected" right at the end of round 1 at WingBowl. Had 100 wings gone & on the last swallow I coughed hurling some food from my mouth.

However, the idea of a guy who consumed two dozen whole eggs in four minutes vomiting became a much more realistic possibility after watching the YouTube star -- I kid you not -- eat a cactus, two-inch needles and all, just moments before the main event started.

Allow that to sink in for a moment.

Before being booted for vomiting, @KevLAbeast ate a damn cactus and it looked as painful as you'd imagine. #WingBowl pic.twitter.com/uKXs042TK5

I've seen a lot of gross and frightening things at Wing Bowl over the years, but this one may take the cake. It was hard to watch, and at times you could hear the audience let out a collective gasp or grown, depending on how much trouble Strahle was having as he tried to swallow the cactus.

And then he ate wings -- 100 of them by his own approximation -- until they spewed back out of his mouth. Different strokes, I guess...