One reporter's take on a Philly staple 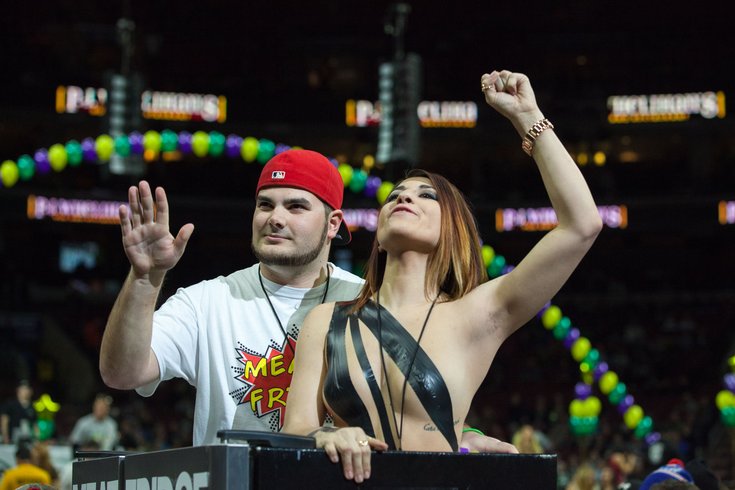 The scene from Wing Bowl 23 at Wells Fargo Center.

Read More
Aaaaaaaaand they're off!

Pat "Deep Dish" Bertoletti is out of his seat and into a wing!

But look out, a sedentary Schuyler's sucking meat off the bone like flesh out of an oyster!

Wait -- what's that? It's the Kiss Cam, gliding through the crowd!

Two lascivious ladies are lip-locking, and -- hold it, what's that now? A hot dog flies from the stands!

And the crowd goes wiiiiiiiiiiild!

OK, so maybe the announcements didn't go exactly like that this morning -- but that doesn't mean they shouldn't have. Welcome to the juvenile farce of Philadelphia culture I witnessed this morning.

Now, let me say this much: I love outrageousness - live for it, even. But what Wing Bowl 2015 was not -- and I imagine every preceding Wing Bowl was not -- was any kind of outrageous event of value.

Instead, it was four long (long) hours of picking pink silly string out of my hat, being gripped for holding support by drunkards, and forced to ogle at bare breasts that were often utilized at just the moment people looked to be getting bored -- like a comic using a fart joke to spruce up his act.

In short, Wing Bowl either needs to change, or it needs to go away. And here's why:

Men are here for the women, not the wings. "Why are you here?" is the obvious question to ask -- especially when it's 5 a.m. on a weekday. And, being the dutiful reporter I am, I asked as much flat-out to members of the crowd flanking me on all sides. While I did get one earnest comment about it summoning "camaraderie" (yeah, OK), most gave me a pitiable look of, Oh, you're serious? "I'm here for the boobies," interjected an older gentleman next to me. He then turned his attention back to the Kiss Cam (where ladies -- and only ladies -- are encouraged to smooch each other). "The guys are so gross," Kathryn Dunn, a member of the "Santa Dog" crew dressed as Mrs. Claus, told me as she lingered by the concessions stand. A New Yorker and first-timer of the event, she told me she had an idea of what to expect, but wasn't totally prepared for its, uh, intensity. "I was walking from the bathroom earlier, and a guy said 'Show me your tits, Mrs. Claus!' These guys, they're aggressive -- it's like they're stabbing me with aggressive words." Then she points to her fellow crew member, "Frankie Z," who dons only a diaper and is -- naturally -- a magnet for attention from passersby. "Feel like a lady yet, Frankie Z?" she asks. He shoots back: "No, but I feel like a woman." 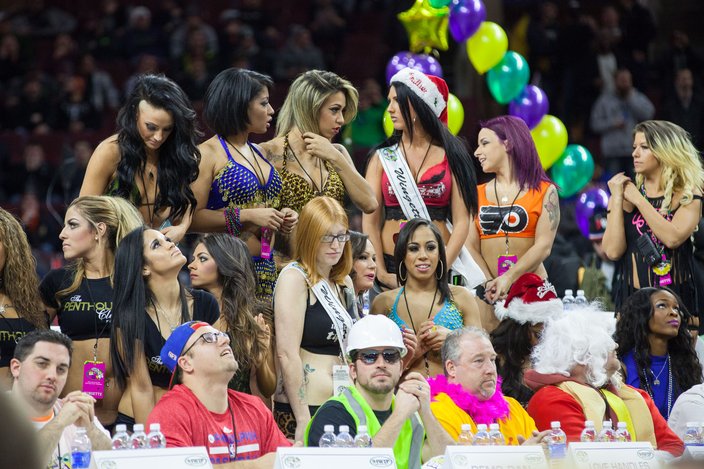 The Wingettes at Wing Bowl 2015. / Thom Carroll for PhillyVoice.com

WIP's not bringing in new audiences. Take a gander at the images of Wing Bowl 2015, and you'll notice something striking: It looks a lot like Wing Bowl 2014 ... and '13, and '12 and so on. It's an event dragged from the grave of the 1990s. Philly gets a bad rap for exactly the reason Wing Bowl does: Its inhabitants can sometimes be loud, obnoxious and boorish -- but the emphasis goes on sometimes. We're not all that bad. The frenzy surrounding the event year after year just reinforces that image. Why take a microscope to a circus event, when we can already see the elephant just fine from the bleachers? In a sea of white heterosexuals (mostly males), I'm not seeing how this is a good image -- "a celebration," said the WIP crew -- of Philadelphia. As I tuned in to the pre-event radio show this morning, they had a discussion about other cities being envious of Philly's Wing Bowl festivities -- a pill I find a bit tough to swallow. See, here's the thing: I completely understand why there might not be much incentive to change; it's a tradition that meets the desires of a target audience, and it long ago hit its sold-out stride, so they're not selling tickets past the legal occupancy (20,000). Status quo -- as much as it's a pain for people like me -- makes sense for what the event is. But it's doing some damage in the meantime, as an event that no longer reaches just the niche audience it once did. No one who cares about this city should be OK with that. Stripping off all pretense, there's nothing inherently good about the image of Philadelphia being binge-eating and boobs at 5 a.m. We're just now getting positive attention for our food, and you want a wing-eating competition to be our marquee? C'mon.

Where's the diversity of entertainment? "I was really disappointed by Wing Bowl 2015," Dakota Kessler, a 20-something, red-Phillies-sweater-wearing attendee said to me as we filed out of the stadium. Finally, I think, someone else gets it. "I was hoping for more fan interaction," he started to explain, "like more Can Cams and Puke Cams."Sigh. We're at a point in our Wing Bowl history where we're, apparently, complacent with wings, breasts, puking and a not-too-shabby -- but still not great -- parade that eats up way too much of the event's four-hour running time. (It felt more like the main event than the actual eating did.) I perked up midway through as a cover band hit the backstage for a rock rendition of  "Talk Dirty," only to be disappointed that it was a one-off performance. Want a suggestion? Book some music -- some talent. Anything, really. Get someone to play a tune to the fiddle, for all I care. But as is, Wing Bowl, with all its chaos, doesn't just border offensive -- it borders boring.

It doesn't feel safe. I was called a faggot before I ever left the parking lot. Later on, I found myself speed-dodging Mardi Gras beads and rolled T-shirts that whooshed past my head. This says nothing of the guy who face-planted into the ground after jumping the barricade, or the volatile shout-off I witnessed backstage. (Or maybe it was just some SoPhilly natives yell-talking -- I'm not entirely sure.) And do I even need to point out that the redhead flashing the crowd and maniacally screeching "Give me my f***ing beads!" as they dropped to the floor might need to be escorted out? As is, if I didn't advise my social circle to steer clear of Wing Bowl because it's horrendously offensive to women, reeking of homophobia (one "joke" was to put a fake Chris Christie and Jerry Jones on the Kiss Cam) or because of its four hours of boobs-and-booze redundancy, then I'd do it because I'd fear for their safety. Where there's beer, there will be a ruckus -- I get it. But we can do better than this. 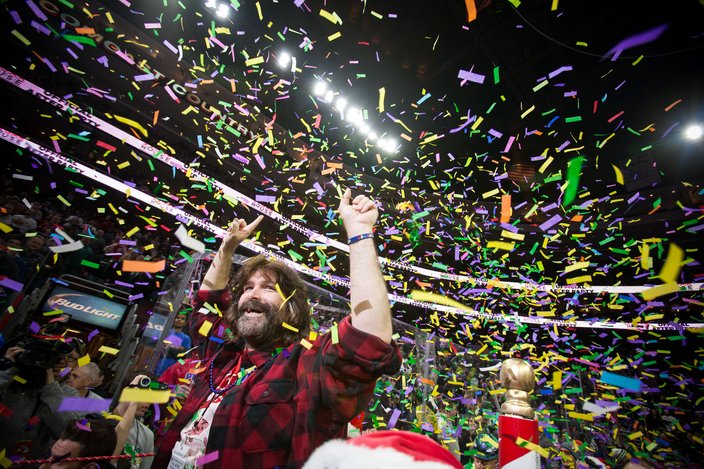 Your "celebrities" stink. The most entertaining "celebrity" moment I encountered at Wing Bowl 2015 was when Commissioner and Eagles long snapper Jon Dorenbos barreled through backstage double doors in a lime-green tux and declared -- as if it needed to be said -- "Let's get f***ed up!" Professional wrestler Mick Foley's appearance, meanwhile, was embarrassing -- to the point where I couldn't tell if his presence in the competition was meant to be a joke or not. (Though I did chuckle when he, at one point, told the crowd he'd "been in steel cages less intimidating than Wing Bowl.") Mind you, I say this as an early fan of Mankind. Point being, if you're going to book celebrities, at least make good use of them.

Before you get into a tizzy, realize this: I'm not saying Wing Bowl is the worst thing to ever happen to Philadelphia and its image (that honor goes to MOVE). Yeah, it's gross and a bit dated, but it does do one thing right: It allows Philadelphians something to rally around. And while that whole building "camaraderie" shtick might be a stretch -- realistically, I'd bet that crowd's already met a thousand times at Eagles games and just doesn't remember -- there is something to that notion. Sports are, wing-based or otherwise, great uniters. But that doesn't excuse the fact that the event has failed to evolve. To an outsider, it suggests Philly is either bored or boring -- and frankly, I'm not sure which is worse.