Trailing by seven points with 44 seconds remaining on Friday night, the Philadelphia 76ers called timeout. What happened out of that stoppage had head coach Brett Brown about as visibly frustrated as you will ever see him.

The Sixers were called for a five-second violation, and they ended up losing to the Washington Wizards, 103-94.

“It’s beyond dizzying for me, it is so frustrating” Brown said. “Sometimes you walk out and say, ‘I wish I got Jahlil the ball’ or ‘I wish I ran this play.’ It’s happened, it happens to all of us. That one ain’t one of them.”

“To walk out and to have one or two of the guys – I’m not throwing anyone under the bus – but as a team, that isn’t professional,” he added. “That’s unacceptable.”

After four games of unacceptable defense, the Sixers were much better on that end of the floor against the struggling Wiz. But two key elements proved to be their undoing in the second half:

1. Failing to stop John Wall in transition: The Wizards guard might be the fastest player in the NBA with the ball in the open floor (Sixers point guard Ish Smith is also up there). Wall finished with 23 points, 11 assists, 8 rebounds, and he was the spark during the key stretch when the Wizards went on a 15-2 run late in the third quarter.

The Sixers took some bad shots and sometimes Wall pushed with his blazing speed off made baskets, but the floor balance wasn’t where it needed to be late in the third quarter.

“When you don’t communicate in transition, All-Star point guards make you pay and that’s pretty much what he did,” T.J. McConnell said after the game.

2. Defensive rebounding: The Sixers rebounded only 63 percent of Washington’s misses, which just isn’t good enough. As Nerlens Noel said after the game, the Wizards’ offensive rebounding (which anecdotally seemed like a lot of long 50/50 type of plays) “definitely killed us.”

There were some positive performances from the home team. Okafor had his way with Washington’s frontcourt en route to an efficient 21 points (9-13 shooting). Robert Covington and Nik Stauskas combined to go 6-12 from behind the arc. Ish Smith had a strong floor game with eight assists to two turnovers, plus this:

But the Sixers’ struggles in transition and on the glass prevented them from winning their ninth game.

Ridiculous cross-match of the night

If the Sixers insist on running out Okafor and Noel to start games, I think we’re going to make this a running feature. Here is how the two frontcourts guarded each other: 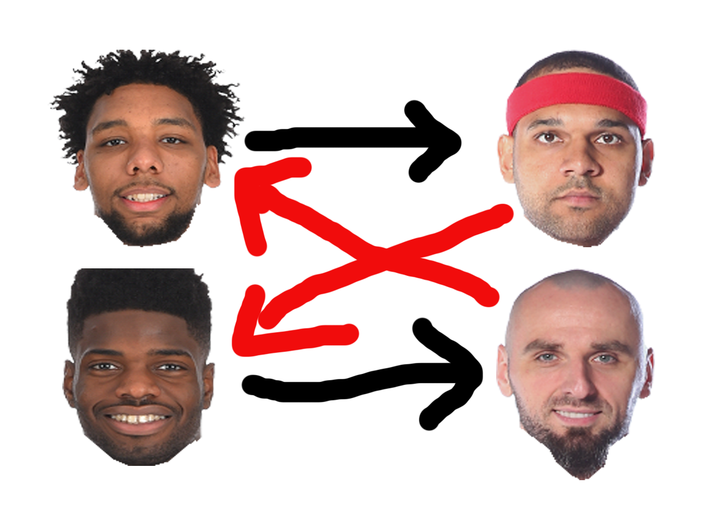 Jared Dudley made some shots in the second half, but specifically against the starters, this matchup was probably a wash. The problem for the Sixers is that a wash is a good night. Okafor had an interesting quote about the communication is takes to find 4s like Dudley in transition.

“That was the biggest challenge, finding the guy,” Okafor said. “With the 5 man, I just run to the rim and the guy ends up in my lap basically.”

Noel twisted his right ankle late in the game on a scrambled play. He walked it off and downplayed the injury after the game. T.J. McConnell, who is still dealing with an ankle sprain suffered on Tuesday against Orlando, admitted that he played with some soreness. After missing Wednesday’s game, McConnell shot 5-10 from the field.