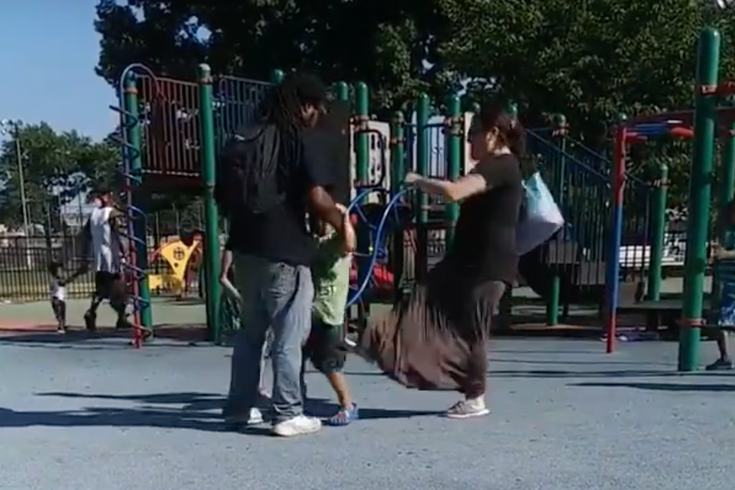 In the video, an adult woman kicks a young boy multiple times and profanely threatens more violence. The second adult, a man, is seen separating the boy and a young girl.

Philadelphia Police are looking to identify two adults from a video uploaded to Facebook on July 10. In the video an adult woman kicks a young boy multiple times and profanely threatens more violence. The second adult, a man, is seen separating the boy and a young girl.

The incident occurred at Tacony Park at the corner of Cottman and Torresdale avenues in the city's Holmesburg neighborhood, police said.

In the video the woman kicks the boy, and makes threats, including:

No kicking. No kicking. You want to kick? How you feel? Keep kicking her in the stomach. I'll kick you in your f***ing nuts and you won't be able to have kids.

You can watch the video, which has been viewed more than 150,000 times, here:

Kelly Jax, the woman who posted the video to Facebook, told PhillyVoice the woman initiated the conflict between the two children when the unidentified woman told her daughter to “get him,” meaning the young boy.

“The daughter grabbed him in a head lock and they both fell to the ground. The boy didn't want to wrestle or fight her. The look on his face said it all. The little girl was on top of him and the boy kept trying to get her off of him and let go of the head lock, he rolled over to the right almost hitting his head on the metal pole, he used his feet to push her off, the man stepped in and said, 'No hitting, no hitting,' and the woman was laughing. That’s why I started recording."

Jax said she wanted to step in, but had her two granddaughters with her and was afraid the woman might turn violent towards her.

After the video cuts off, Jax said, the adults and children who had been fighting exited the park together, and another woman from the park followed them to a nearby Dunkin Donuts. The woman from the video told the woman who pursued her that the boy was her foster son.

The Philadelphia Police Department is asking anyone with information about the adults to call (215) 686-8477 or text 773847, or use this electronic form to submit a tip anonymously.