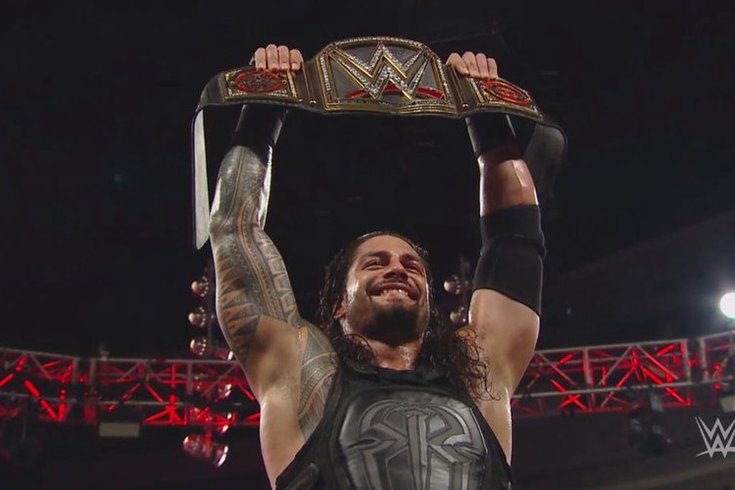 The Roman Reigns era in WWE officially began Monday night in Philly as he captured the WWE World Heavyweight Championship.

Inside the Wells Fargo Center last January, I, along with the rest of the Philly crowd, booed Roman Reigns and his cousin, Dwayne “The Rock” Johnson, unmercifully as they celebrated Reigns winning the Royal Rumble, which paved his way to the main event of WrestleMania against then-WWE World Heavyweight Champion, Brock Lesnar.

Inside that same building on Monday night, Reigns was cheered wildly as he captured the championship by defeating Sheamus to become a two-time WWE World Heavyweight Champion. Should we really count his reign at Survivor Series? Technically, yes. However, this was Reigns’ signature win to cement his status as the top babyface in the company ready to supplant John Cena.

We saw the passing of the torch Monday night. There have been signature wins for some of the best wrestlers in the world – Hulk Hogan defeating the Iron Shiek at Madison Square Garden in 1984, Stone Cold Steve Austin defeating Shawn Michaels at WrestleMania XIV in Boston, and now the Philly crowd can say they’ve seen the beginning of possibly a long and illustrious career of the next huge WWE superstar.

It wasn’t easy. Before the TLC pay-per-view on Sunday night, the crowds absolutely despised Reigns. We’re smart fans, and we knew that WWE was trying to push Reigns down our throats with the same character basis as Cena and Hogan had – the big babyface superhero. It doesn’t work like that in 2015 anymore. Regardless of how many kids love Reigns and buy his merchandise, the loud and vocal majority resented him not because of who he is, but because WWE tried changing his character to fit their mold. We loved Reigns as the badass from The Shield, and that’s the character WWE needed to move forward with for Reigns. Beginning Sunday night with his rampage on the League of Nations and Triple H, and his opening promo on Monday, the crowd completely flip-flopped on him.

It was as if it was a miracle the WWE creative team pulled out. They finally pulled the trigger on what the fans wanted to see.

Here’s what went down on Monday night:

When Stephanie McMahon opened the program by calling out Reigns and continuously slapping him, I wasn’t sure what to expect.

It’s hard to trust WWE with certain angles and storylines, especially with the stale product they’ve had now for years. But when Steph said that the chairman of the board, Vince McMahon, would be at Raw, the roof figuratively blew off the Wells Fargo Center.

Later in the program, Vinnie Mac made his return to WWE television in the middle of an R-Truth-Bo Dallas matchup, sent both guys backstage early, and called out Reigns. Backstage, R-Truth appreciated McMahon’s gumption for heading out to the ring to congratulate him on a great match face-to-face.

While McMahon was about to throw it down with Reigns, Sheamus came out and said he’d like to be the one to beat down Reigns. When McMahon asked the Philly crowd if they wanted to see a WWE World Heavyweight Championship match, it was a resounding, “Yes! Yes! Yes!” But, the WWE owner was trolling us all, and said that wouldn’t be happening.

Reigns would accuse McMahon, who would brag about the size of his grapefruits for the last 15 years, of having shriveled up prunes. Apparently, that was the final straw, and McMahon made the main event between Reigns and Sheamus for the title, and if Reigns didn’t become champion, he would be fired.

As McMahon extended his hand for a handshake, he quickly took it back and kicked Reigns right in the no-no’s. How’s that figurative message for you?

McMahon would make his way back down to the ring before the main event, so did anyone really think he wouldn’t get involved at all? Reigns and Sheamus were having a pretty good match with some great near falls, but the ending sequence was when the crowd got really hot and really wanted Reigns to win. After he nailed Sheamus with a Superman punch, the ref’s hand was about the hit the mat for the three count before McMahon pulled him out of the ring, you know, just for a talk. Sheamus would nail Reigns and shove him to the outside of the ring before Rusev and Alberto Del Rio came out to attack him behind the ref’s back. It didn’t really work, as Reigns took them down before also hitting McMahon, who was on the ring apron, with a Superman punch. After that, Sheamus nailed the Brogue Kick but Reigns would kick out at literally 2.99999 seconds. As Sheamus was preparing for a second Brogue Kick, Reigns hit him with a spear and got the three count to officially begin the Reigns era in WWE.

HE DID IT! @WWERomanReigns has won the @WWE World Heavyweight Championship! #RomanEmpire #RAW pic.twitter.com/To9YAR821k

After the match, Reigns would celebrate as the show went off the air. For the live crowd, we were treated to the Usos and Dean Ambrose coming out and celebrating with Reigns.

The new champion grabbed the mic and thanked the Philadelphia crowd. He said that every once in a while, it’s good to have a reality check and that’s what the crowd provided him last January at the Royal Rumble when they booed him out of the building. It was a really nice gesture by Reigns to the crowd, and he sounded legitimately happy. It’s definitely not as easy as he thought, and now he begins his ascent to the top of WWE for a long time.

Just a great job by WWE here. Not enough words can describe how they’ve undone all the negative things to build Reigns in just two short days. It truly is amazing. The new champion will be on ESPN’s SportsCenter Tuesday night at 9 P.M. So, yeah, I guess we all should’ve seen this coming.

Focusing now towards the Wyatts and Team Extreme, the two sides partook in an Extreme Rules Match as a sort of throwback to the days of ECW. I mean, what a more perfect place than in Philly for that? The promo Team Extreme had before the match was pretty great.

They had some great spots, especially with Tommy Dreamer performing a Death Valley Driver on Luke Harper off the stage onto some tables.

I honestly thought Team Extreme would win due to the infamous even-steven booking WWE loves to use, but after Erick Rowan hit a top rope splash onto Rhyno and pinned him for the win, I couldn’t have been happier with the outcome.

.@ErickRowan dives thru @Rhyno313 to pick up the #Extreme victory for #TheWyattFamily! #RAW pic.twitter.com/FeaVqFHm8z

The Wyatt Family just won two big matches in a row, and maybe, just maybe, WWE’s beginning to rebuild their best heel stable once again. I love the Dudleys as much as the next guy, but they need to be in the tag team division feuding with the other teams now. The Wyatts/Dudleys feud should be over, but it wouldn’t surprise me if it isn’t.

It was good to see no-nonsense Kevin Owens return and destroy both Dolph Ziggler and the man who took the Intercontinental Championship away from him, Dean Ambrose. Ambrose and Ziggler were having a good match with a few near falls before Owens hit the ring and destroyed both of them.

"I don't have to justify myself ... What you just saw is only the beginning!" - @FightOwensFight #RAW pic.twitter.com/kYz3724FWN

In a backstage segment, Owens put the utmost importance in trying to gain back the Intercontinental Championship. Good stuff.

The New Day came out for a promo after their great win from one night earlier during a Triple Threat Tag Team Ladder Match for the WWE World Tag Team Titles. However, this wasn’t one of those New Day promos we’ve all come to know and love. In fact, they brought out both the Lucha Dragons and the Usos and paid their respects to each team for what was probably the best match at the TLC pay-per-view one night earlier.

.@XavierWoodsPhD: "We didn't do that match last night for US ... We did it, for THEM! (The @WWEUniverse)" #RAW pic.twitter.com/C5GzSWAry1

It was really out of character for the champions, but the fans still bought into it. They shook each other’s hands and once the Usos and Dragons left the ring, the champions said that while their words to them were sincere, Monday night was about the champions as they started dancing and twerking like they normally do.

This would lead to the Usos and Dragons returning to the ring to take out The New Day, much to the chagrin of the fans in attendance, who started booing both teams for doing so. I’m not sure what WWE was going for here, but if it was to get The New Day more over as heels, they did a terrible job. If it was to get both the Usos and Dragons over as heels, then, well, I guess it worked, because the fans hated it.

I’m now loving the angle with Ric Flair, Charlotte and Becky Lynch. Flair tripped up Alicia Fox in a tag team match, and Lynch would get the submission win with the Disarmer, not knowing what Flair did. The three celebrated in the ring. I’m looking forward to where this is going now, because it’s a storyline we’ve seen before. There are many ways to take this, and the fact that the women’s division now has an actual storyline that seems interesting is great. Will it lead to an eventual Charlotte/Lynch feud?

We now have The Miz begging Neville to teach him his English accent so he can audition for the new James Bond movie. This is certainly better than Neville just going out and having a good match without a story. I’m hoping we see segments in the coming weeks of Neville trying to teach Miz his accent.

No stunt double needed for @WWENeville, who nails the #RedArrow for the victory! #RAW #SCTop10 pic.twitter.com/qvyUvNytYM

Neville defeated Tyler Breeze in a match, and now anything WWE does with Breeze at this point will be looked at as a failure.

I’ve read some reviews of this show online, and the prevailing notion was divided. I’ll tell you this, though – being there live definitely made it better. The crowd brought it and there was an Extreme Rules match and a title change, so they could have done a lot worse. The crowd loved it, and I’m sure they loved seeing Vinnie Mac live. He had a few back-and-forth moments with the fans at ringside which is always entertaining. Overall, it was a fantastic show to be at live, and one that we won’t soon forget with the dawning of the Reigns era in WWE.

WWE announced that Raw would be returning to Philly on March 21st, just two weeks before WrestleMania in Dallas. The Philly faithful booed a WrestleMania ad that played up the location of Dallas for the event, but those jeers quickly turned to cheers after Lilian Garcia announced Raw would return to our city in March. Tickets go on sale soon, but you can order yours at comcasttix.com with the Presale password "CHAMP" now.

• Non-Title: Dean Ambrose (c-IC) vs. Dolph Ziggler ended in a No Contest after Kevin Owens interfered and attacked both men.

• R-Truth vs. Bo Dallas ended in a No Contest after Vince McMahon stopped the match.

• Alberto Del Rio (c-US) and Rusev d. Ryback and Jack Swagger by pinfall after Rusev hits Swagger with a superkick.

• Neville d. Tyler Breeze by pinfall via the Red Arrow.

• Charlotte (c-D) and Becky Lynch d. Brie Bella and Alicia Fox by submission after Lynch locked in the Disarmer on Fox.