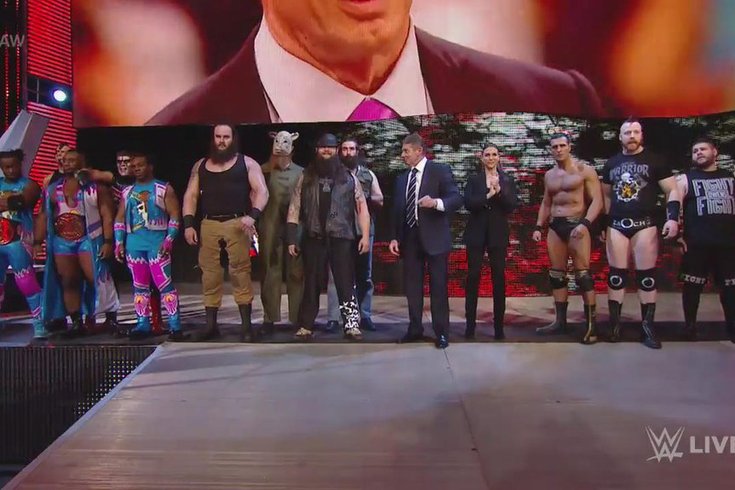 This is what awaited Roman Reigns in the main event on Monday night.

The Smoothie King Center in New Orleans, LA hosted Raw on Monday night which featured a title change, a complex main event, and the return of one of the most popular superstars right now in WWE.

Brock Lesnar made his long anticipated return to television and ran roughshod through the main roster, including the WWE World Heavyweight Champion himself. A new champion was crowned, and it was remarkably shocking that it happened after the events that occurred on SmackDown last Thursday night. What title changed hands? Stay tuned.

And Monday also marked the first official inductee into the WWE Hall of Fame Class of 2016, as WCW icon, Sting, got the call to the Hall. He’ll headline this year’s crop of Hall of Fame talent, and the ongoing rumor is that his longtime rival, Ric Flair, will be inducting him. Congratulations to Sting on a well-deserved honor.

Vince McMahon and his daughter, Stephanie, had quite the idea on Monday night to have the WWE World Heavyweight Champion, Roman Riegns, compete in a One vs. All match that was billed as Reigns vs. pretty much the entire main roster. It wasn’t your typical gauntlet match where after each pinfall, a new wrestler comes in to continue the match.

It's #ONEvsALL as @WWERomanReigns takes on the #RAW roster LIVE NOW on @WWE #RAW on @USA_Network! pic.twitter.com/oEEfvh9oSo

Kevin Owens got the nod in the main event, and held his own against Reigns. In fact, no other superstar got the chance by themselves to face Reigns because Owens went toe-to-toe with the champion, and may have just cemented his role on the main roster as an upper mid-carder into the main event picture for the future.

Throughout the show, Paul Heyman would try to convince Vince and Stephanie to allow Lesnar to just meet the winner of the Royal Rumble at WrestleMania for the championship in the main event. They weren’t keen on the idea, and Stephanie made it final that Lesnar would be participating in the Royal Rumble match itself in less than two weeks.

While I don’t expect Lesnar to come away from the Rumble with the championship, I’m sure we’ll see some kind of angle take place that will set up his WrestleMania match. As of now, internet rumors have Owens as Lesnar’s opponent, and the two came into contact on Monday night when Lesnar suplexed every superstar before hitting Reigns with the F5 as Raw went off the air.

Coming off his surprising win against Alberto Del Rio last Thursday on SmackDown, Kalisto was rewarded with a United States Championship match on Monday night. Not very many people thought Kalisto would stand a chance against Del Rio in a championship match, and the way Del Rio dominated the match was sort of predictable in that he would prove Thursday’s loss was a fluke.

But that didn’t happen. Del Rio dominated most of the match, and even set up Kalisto for his Double Stomp finisher in the corner, but Kalisto would move and gain some offense on Del Rio. Then, out of nowhere, Kalisto would roll up Del Rio for the three count and we were treated to another title change on Raw.

With Kalisto holding the United States Championship now, I wonder if he’ll be defending it as much as John Cena did when he was champion, or if Del Rio quickly wins the title back.

It’s still too early to tell, but I wouldn’t be surprised if Del Rio regained the title at some point, but not as early as Thursday, which is when the rematch is.

Chris Jericho’s Highlight Reel returned to Raw with his special guests, the WWE World Tag Team Champions, New Day. I expected this segment to be highly entertaining, and I wasn’t disappointed. It’s important for the champions to come up with new ways each week to entertain the audience and they’ve done a great job in doing just that for the last several months.

The Usos would interrupt the party, however, which would lead to a tag team match with Jericho in the Usos’ corner and Xavier Woods and his trombone in the corner of New Day. It was a long, long match – something we’ve become accustomed to with these three-hour Raws each and every week – which isn’t always that great.

Jericho would chase Woods away during the match, but he would return after a commercial break, rendering that spot useless.

Jericho would then confront Woods while he was playing the trombone, take it and break it over his knee as Woods cried in despair as if someone had taken the life of someone close to him.

I have to admit, he was pretty close to that trombone.

The Usos would grab the win after Kingston got rolled up, so we’ll likely see the winners of the match challenge for the Tag Team titles soon. As a sidenote: I’m completely done with these rollup finishes. That’s all WWE books anymore, and it’s really old and really unoriginal.

Becky Lynch wasn’t in a good mood on Monday night as she attacked the Divas Champion, Charlotte, as she was making her way to the ring for her match against Brie Bella. Ric Flair wasn’t having any of that and grabbed the mic and went in on Lynch and said that Charlotte wouldn’t be wrestling. The two then left the ring and headed backstage.

Maybe it’s just me, but why not have Charlotte attack Brie from behind after she got attacked, giving her some even more heel heat? It looked pretty pathetic for her to just walk away with her dad because she was jumped by Lynch. Get back in there and take out Brie and Alicia Fox. What’s so hard about that?

The Social Outcasts wasn’t just a one week thing! Heath Slater, Adam Rose, Curtis Axel and Bo Dallas would take on the Wyatt Family in an eight-man tag match, but the bout didn’t last long. Shortly after the bell rang, Ryback made his way to the ring to try and gain some revenge on the Wyatts after they dismembered him last Monday, along with Big Show.

Ryback came out to exact some revenge from last week’s attack on him and Big Show by the Wyatts. They ran off while Ryback stood in the ring with the Social Outcasts. Any chance he joins the new group?

• Non-Title: Dean Ambrose (c) vs. Sheamus ended in a double countout. Ambrose busted Sheamus open outside of the ring, but Kevin Owens appeared and took out Ambrose.

• Titus O’Neil d. Stardust by pinfall via the Clash of the Titus. Stardust attacked O’Neil after the match.

• Wyatt Family vs. Social Outcasts ended in a No Contest after Ryback ran in to attack the Wyatts. The referee never made a final decision, so I’m assuming the bout is officially a No Contest.

• One vs. All: Roman Reigns (c) vs. Kevin Owens ended in a No Contest after all of Vince McMahon’s hand-picked superstars attacked Reigns during the match. Brock Lesnar made the save, only to hit Reigns with an F5.