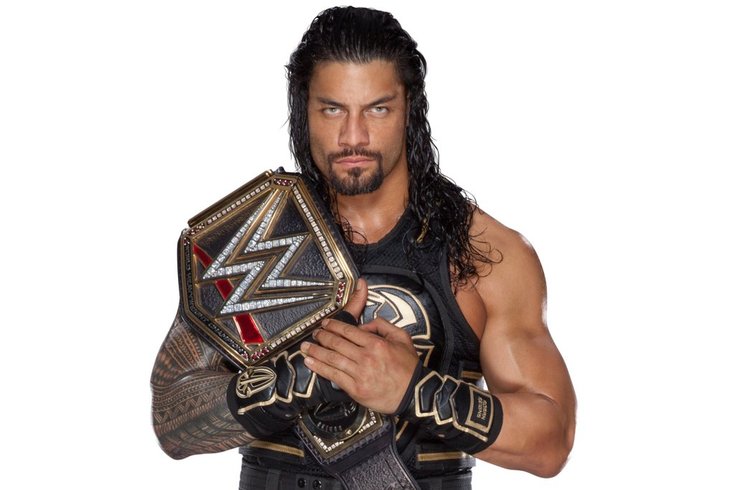 The Authority put several obstacles in front of Roman Reigns on Monday night.

The WWE World Heavyweight Championship made an appearance on Monday Night Raw, but not with its rightful owner in Seth Rollins. Dean Ambrose, who would appear at the end of the program after the main event, still had the title in his possession and helped Roman Reigns stave off The Authority before taking off once again with Reigns and the championship belt while Triple H and Rollins looked on in anger.

WWE has done a tremendous job in building this Rollins-Ambrose feud since last summer and now that it’s for the WWE World Heavyweight Championship, it makes it that much better.

The Authority once again kicked off Monday Night Raw at the AT&T Center in San Antonio and they had one thing on their mind – get back the WWE World Heavyweight Championship for Seth Rollins. After Dean Ambrose defeated Rollins by disqualification at Elimination Chamber, he would take off with the championship and hold it at ransom. After ordering Ambrose to return the championship to Rollins, The Authority wound up having a visitor that they weren’t expecting.

Reigns’ music hit and he made his way to the ring. It turns out he was there as Ambrose’s personal negotiator, asking for a rematch for the Lunatic Fringe at WWE’s next pay-per-view, which is in two weeks, Money in the Bank. Ambrose was not only asking for a WWE World Heavyweight Championship rematch, but also a Ladder Match so that there would be no question as to who the rightful owner of the WWE World Heavyweight Championship was. Not only did Reigns come across as a superstar and leader in this promo, his pointed shots at Rollins for running around with “mom and dad” and the “smallest security team ever” clearly got to Rollins.

While Stephanie McMahon decided that a rematch was unnecessary, Rollins interrupted to accept Ambrose’s challenge. He was so mentally flustered at not having his championship belt around his waist that he would give Ambrose that rematch. Rollins clearly wasn’t thinking straight as the rest of the group was trying to talk some sense into him, but he said he didn’t need any of their help, “especially from a 7-foot tall piece of crap.”

Triple H and Stephanie decided to stack the deck against Reigns a bit later in the night by putting his spot in the Money in the Bank Ladder Match up for grabs three times by pitting him against King Barrett, Mark Henry and Bray Wyatt in one-on-one matches. It wasn’t a huge surprise that Reigns came out on the winning side in each match, even if he isn’t a lock to win the briefcase in two weeks. But not having Reigns in the dance would bring down not only the star power in the match, but also likely pit Reigns against another inferior opponent to make people care even less about them then they do already. Luckily, Reigns will be in that match and might be the favorite to walk away with that Money in the Bank briefcase.

NXT Champion, Kevin Owens, was given a top of the hour slot, so he keeps climbing that proverbial mountain to the top. His promo was directed not only at John Cena, but also at the fans who buy him as a legitimate superhero. Cena interrupted and the two had a great back-and-forth promo in which I think many people overanalyzed a little too much.

Some thought Cena’s promo came across as whiny and bitter, but I thought it was spot on for what he was reacting to. Before Cena arrived, Owens ran him down and basically called him a fake superhero that’s been given the television time that many others haven’t. Cena’s reaction was mainly addressing that point, and the fact that his “Never give up” catchphrase isn’t a catchphrase, but it’s life advice for everybody – adults and children alike. Cena pointed out a fan donned in his gear holding a sign that says “I’m beating cancer” as to being the whole idea behind the phrase “never give up.” Some think Cena is being exploitative when he addresses those real-life issues in his promos, but he’s been on top long enough and has done more Make-A-Wish appearances than anyone could dream of to convince me it isn’t just something for his character. It’s truly in his heart.

"Last night, not only did you take me to the limit, but you WON!" - @JohnCena to @FightOwensFight on #Raw... pic.twitter.com/XNKLvXRAIp

And in what was probably the best moment of the promo, Cena said Owens’ life journey was defined by not “Fight, Owens, Fight!” but by “Never give up.” When it looked like both superstars would come to blows, Owens left, which was also met by instant criticism on the internet. “He just beat Cena last night, why is he running away!?” I think you answered your own question. There’s nothing for Owens to prove by getting involved physically with Cena after he dominated him at Elimination Chamber. He can wait until their rematch at Money in the Bank in two weeks. He gains nothing by getting physical with Cena, likely coming out on the losing end just to make Cena look a little bit stronger against him. Owens doesn’t have to do anything really, and I think he hammered home that point by leaving because he was smart, not because he was a chicken. Sometimes people can overanalyze way too much when they don’t like how a certain segment went, and the promo between Owens and Cena was very polarizing in that respect.

It was announced later in the show that Owens would defend his NXT Championship in an open challenge this Thursday night on SmackDown. I think that’s a great move.

Ryback’s new feud with Big Show. Ryback was set to defend his newly won Intercontinental Championship against The Miz, but Big Show made his less than triumphant return and said if anyone was going to beat Ryback for the title, it would be him. “You call yourself ‘The Big Guy’? You ain’t got nothing on the Big Show.” I’m absolutely 100 percent not looking forward to this series of matches. We can take the Big Show about as seriously as King Barrett nowadays, and putting Ryback in a feud with him instead of actual Intercontinental title contenders is just a waste of time.

Rusev was interviewed backstage on crutches, and he looked like a shell of a man he once was. He was wearing all black, on crutches that were clearly too small for him, and spoke in a somber tone. He looked and sounded like a defeated man, but he promised to regain what he’s lost when he returns from a broken ankle. There’s currently no timetable for his return, but hopefully this injury isn’t something that keeps Rusev out for the long haul.

I was kind of glad to see a Divas match end in interesting fashion. Nikki and Brie pulled the ol’ switcheroo and Paige was defeated in her second shot at the Divas Championship since returning to television. I know the Bellas are twins, but it’s pretty easy to tell them apart. Unless you’re a WWE referee, I guess. I’m still not sure there’s a good reason to keep the Divas title on Nikki, but she’s now the longest-reigning champion in WWE, winning the Divas Championship back in November at Survivor Series. That’s cool?

And in what could amount to the biggest news of the night, PW Torch reported late Monday night that Samoa Joe, who just made his debut in NXT two weeks ago, has already signed a full-time contract with WWE. Joe’s original contract was limited dates with him able to fulfill his independent promotion dates. What was the catalyst for WWE to sign him to a full-time deal? Apparently his merchandise sales were “off the charts.”

Joe was at Raw on Monday night and wrestled in a dark match against Tyson Kidd. As of this current writing, WWE has not confirmed the report.

Ever try a Sonic shake? You’re missing out. And this promo that aired during Raw should make you want to go out and buy every 25 flavors. Remember, half price shakes after 8 p.m.!

• Roman Reigns d. King Barrett by pinfall via the spear. Reigns remains in the Money in the Bank Ladder Match.

• Dolph Ziggler d. Kofi Kingston by pinfall via a rollup. The New Day attacked Ziggler after the match and the Prime Time Players made the save. That led to a six-man tag team match.

• Roman Reigns d. Mark Henry by countout. Reigns hit Henry with a Superman punch on the outside and was able to get back in the ring before the ten count. Henry attacked Reigns after the match with the World’s Strongest Slam and a splash.

• Divas Championship: Nikki Bella (c) d. Paige by pinfall via small package. Brie actually switched places with Nikki on the outside of the ring without the referee’s knowledge, and Brie was able to pin Paige.

• Randy Orton d. Sheamus by disqualification after Sheamus hit Orton with a chair outside of the ring.

• Neville d. Bo Dallas by pinfall via the Red Arrow.

• Roman Reigns d. Bray Wyatt by pinfall via a spear.