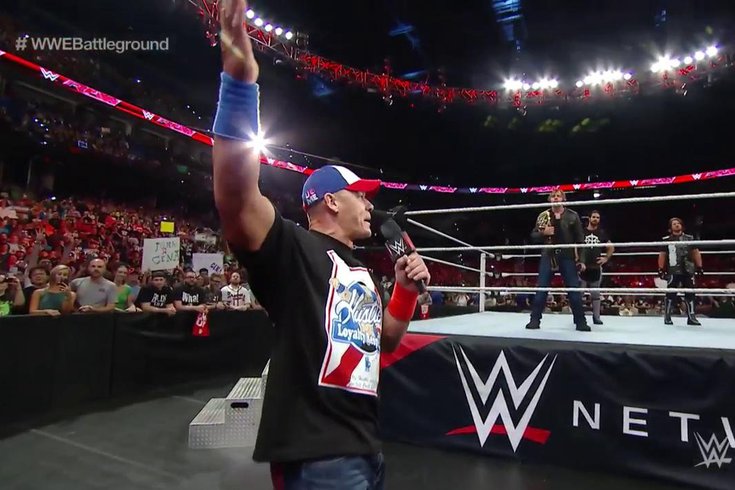 John Cena and AJ Styles tried to insert themselves into Battleground’s main event on Monday night from Tampa.

The Battleground main event has been in flux for one week after word came down that Roman Reigns would be suspended for 30 days due to violating the company’s wellness policy for the first time. Monday night at the Amalie Arena in Tampa, Fla., we got some answers that we’ve been looking for.

The last time WWE was in Tampa for television was for an episode of SmackDown. It occurred after January’s Royal Rumble that focused on Reigns and Dean Ambrose fending off the Wyatt Family. Things were different this time around, as Reigns wasn’t around due to his suspension and Ambrose was the WWE Champion, winning it just eight days prior at Money in the Bank.

WWE was fully prepared to load up Battleground’s card heading into Raw, and we saw some of that play out through the three-hour Raw.

We were all wondering when – or if – WWE would acknowledge Reigns’ suspension from last Tuesday on the air this week on television. It had a chance to announce it on SmackDown on Thursday night, which is currently taped on Tuesdays, but it decided to wait until Monday night to really hammer it home to its audience.

Seth Rollins opened the show with a promo in the ring and said he “wasn’t supposed to” talk about Reigns’ suspension, but did so anyway by having his tweet apologizing for his suspension show up on the big screen.

I apologize to my family, friends and fans for my mistake in violating WWE’s wellness policy. No excuses. I own it.

Rollins ran down Reigns and then requested a one-on-one match with the WWE Champion Dean Ambrose and wanted Reigns thrown out of the match due to his suspension.

You may notice I called Ambrose “WWE Champion” because beginning on Monday night, that’s what he’s been referred to as by everyone on television and WWE.com. The moniker “WWE World Heavyweight Champion” was dropped and many believe it’s a prelude to WWE re-introducing a new world championship belt so both Raw and SmackDown have a champion after the brand extension in just a few weeks.

[I’m 100 percent against that idea and if you’ve listened to The Straight Shooters, you’ll know why. A “floating” champion would not only elevate the secondary titles on each program, but make that one title so much more important to both brands and gives the creative flexibility to move certain wrestlers from show to show, much like the inaugural brand extension did in 2002.]

Referring to Ambrose as just the WWE Champion, in my opinion, increases the likelihood of a controversial finish at Battleground when Ambrose defends against Rollins and Reigns, who is still a part of the main event, at least for now.

But there was a chance it could have been a Fatal Five Way Match for Ambrose’s championship.

Out came Stephanie McMahon and promptly made matches between Cena/Rollins and Styles/Ambrose and if Cena and Styles could win their respective matches, they’d be inserted into the main event on July 24th. Reigns’ position, however, wasn’t in jeopardy.

Another good match between Rollins and Cena with the right outcome

Rollins and Cena have had many matches together, and their match on Monday night was no different than usual. The two bring it in the ring and really can tell a good story, but many going into this match probably thought Cena had a good chance to come out top to be added to the main event and if that happened, Styles would almost certainly follow suit. But that didn’t happen, because The Club came out to distract Cena and Rollins was able to hit the Pedigree and get the win.

Rollins is UNDEFEATED since his return

Clearly, Rollins was defeated by Ambrose at Money in the Bank, so my joke fell flat. So it goes.

Styles vies to do what Cena couldn’t

In the night’s main event, Styles once again gave us a fantastic performance that has become commonplace not only in his career, but WWE as well. We’re all prevalent to an extent of how WWE matches are produced and certain spots and what wrestlers can and can’t do. Styles has done everything in WWE that he’s done nationally and remarkably is still going strong. The WWE ring is different and usually takes a while for new wrestlers to get used to, but it looks like Styles has already labeled the WWE ring his second home because he just looks so comfortable in it.

Facing the WWE Champion was a great chance for him as well to be added to the Battleground main event, although Rollins, who was on commentary during the match, would’ve rather it remained a Triple Threat Match because fewer people mean his odds of regaining the championship increase.

It makes sense. But when Luke Gallows and Karl Anderson came out to distract Ambrose towards the end of the match, Rollins didn’t do much to prevent that from happening. Instead, Cena made his way out and attacked the duo, allowing Ambrose to hit Dirty Deeds on a distracted Styles for the victory.

Gallows and Anderson laid Cena out with the Magic Killer on the steel stage, which looked like it hurt… a lot. Rollins laid out Ambrose with a Pedigree in the middle of the ring and Raw went off the air with all the heels standing tall. Really good angle to close the show.

Owens vs. Zayn: The Final Chapter at Battleground?

In what must be the 1,000th time we’ve seen them on Chris Jericho’s Highlight Reel, KevinOwens and Sami Zayn confronted each other again and looked to put an end to this feud that's been brewing for over a year and a half.

Jericho subtly hinted that the bad blood both of these guys have for each other was a little too volatile for his JeriTron 6500, so he had it raised to avoid any damage. Zayn challenged Owens to a final match at Battleground, and Owens obliged.

Owens made a point to mention how when Zayn signed with WWE and “left him” in the indies, he was happy for him. But once Owens signed with WWE and won the NXT Championship, by turning on Zayn, that he couldn’t handle it. It’s an interesting twist to paint Owens with some sympathy, but because he’s a heel, nobody’s going to believe him. He does a great job, but the announcers don’t do a good enough job to call him out on it and strike it down. I actually feel bad for Owens now, and I don’t think I’m supposed to.

Now, any time these guys are involved in a match together, it’s an instant classic. The promo made me believe each of them will, in fact, be drafted to separate shows during the brand extension, so this will indeed be The Final Chapter.

I don’t think this feud will ever end simply because these two guys have feuded in NXT and now the main roster, and talk about it constantly. It’s been great to watch an old school style wrestling angle play out in 2016 with hatred you can believe through the television screen. That’s what makes these guys so good at what they do.

Will WWE try a tag team much later in the future after always building up their friendship in almost every promo and video package? Interesting thing to think about, but I don’t think we’re close to anything like that right now.

Enzo Amore and Big Cass might be the only act other than New Day to make the audience do the wave on command. The Wave is cool to do now, so whenever fans do it in the audience, they’ll be requesting the presence of Amore and Cass. It’s almost kind of brilliant.

The duo faced a pair of jobbers who were interestingly enough given names of prospects from the Phillies’ Clearwater Threshers affiliate, Carlos Tocci and Mitch Walding. They were playing minutes away, so I guess WWE just wanted a roster to look over to give the jobbers names that might be known to the audience. According to WWE.com, their names are Carlos Hershey and Mitch Walden. You be the judge.

Maybe. Or maybe they just couldn’t think of any names on their own. It was fun, though.

Natalya’s had enough, it’s time for a change

Becky Lynch was set to take on Summer Rae but attacked Natalya, who was on commentary for the match that never began. I’m glad they’re building this as a blood feud of sorts.

Natalya’s new attitude can be punctuated by her claim on commentary of, “Enough is enough and it’s time for a change!” which was her uncle, Owen Hart’s catchphrase in WWE after his brother and Nattie’s uncle, Bret, left for WCW. Great tribute to Owen.

The New Day came out dressed like the Wyatt Family, further poking the proverbial bear. I love how Bray has caught on to Xavier Woods’ mannerisms while he’s in his presence because that seems to be playing into the big angle that goes down.

Will Woods leave The New Day? His sudden departure from their backstage interview lends credence that this is either a set-up by the WWE World Tag Team Champions, or that the Wyatts are coming back withvengeance and breaking up the most popular act in WWE right now.

I love it. I hope New Day doesn’t split up. I really don’t. But I wouldn’t be mad if they did.

Titus O’Neil likely won a chance at the U.S. Championship after defeating Rusev by countout.

The Miz defended his Intercontinental Championship against Demon Kane, but Maryse faked an injury, unbeknownst to Miz until he got back in the locker room. Waste of a segment.

Tampa Bay Buccaneers quarterback Jameis Winston was in the house Monday night along with his teammate Donovan Smith.

Sasha Banks won again with the Bank Statement on Dana Brooke, and is working her way towards a Women’s Championship opportunity against Charlotte sooner or later.

• Seth Rollins d. John Cena by pinfall via The Pedigree.

• Becky Lynch vs. Summer Rae never started because Becky attacked Natalya who was seated at ringside for commentary.

• Intercontinental Championship: Demon Kane d. The Miz (c) by countout after Miz took Maryse backstage after she “hurt” her ankle.

• Apollo Crews/Cesaro d. Sheamus/Alberto Del Rio by pinfall after Crews hit Sheamus with a spinning sit-down powerbomb. Del Rio turned on Sheamus during the match, leading to the finish.

• Non-Title: AJ Styles Dean Ambrose (c) d. AJ Styles by pinfall via Dirty Deeds. The Club came out to distract Ambrose but Cena made the save. Rollins was on commentary during the match.