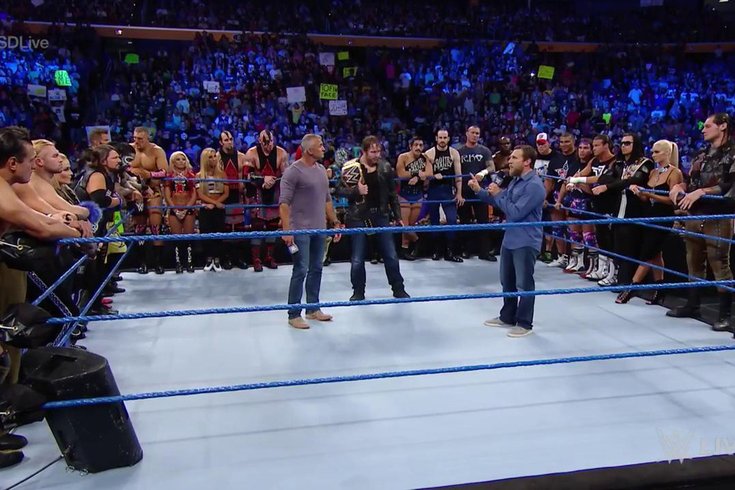 SmackDown gave ample opportunity for someone to become the No. 1 contender, and Dolph Ziggler rose above the rest.

Buffalo, N.Y.’s First Niagara Center hosted the first live SmackDown after the official brand extension Tuesday night, but I’m sure the audience was wishing for the same type of show we saw from Pittsburgh on Monday night. While SmackDown boasted a new theme song, a relatively new set, and brought the blue ropes back, the in-ring product wasn’t as good as what we saw on Monday night.

While Raw on Monday night may have been one of the best episodes of professional wrestling on television, SmackDown on Tuesday night left a lot to be desired. There were commercials during almost every match, the matches weren’t all that good, and the winner of the main event, while unpredictable, just annoyed me. I’ll explain later.

Much like their counterparts did on Monday Night Raw, both Shane McMahon and his general manager, Daniel Bryan, opened up the show with the entire SmackDown roster in the ring. With the exception of most of the women on the roster and American Alpha, who must have been too busy to deal with the opening promo.

A Six-Pack Challenge main event was made to determine who the new No. 1 contender for Dean Ambrose’s WWE World Championship [which they are calling it now] would be. The first five participants were named, and the sixth one would have to win a battle royal to ensure them a spot in the main event.

John Cena, Bray Wyatt, Dolph Ziggler, Baron Corbin and AJ Styles were joined by Apollo Crews in the Six-Pack Challenge, who technically eliminated Demon Kane to win the first match of the night.

Leading up to the main event, several promos were aired talking about winning the main event and going on to face Ambrose at SummerSlam. It was a nice touch. I enjoyed somewhat the new camera angles SmackDown used, rarely, if at all, using the hard camera that viewed the entire ring. They had a camera bit closer to the action in place of the usual hard cam, and a swinging camera that could rotate around the ring posts. It was pretty cool, but those angles also missed a couple key spots, especially in the main event.

When Styles hit Cena with the Phenomenal Forearm, the camera barely captured it. However, they did capture Ziggler knocking out Styles with a superkick to earn his way into the SmackDown main event at SummerSlam.

.@WWE Champion @TheDeanAmbrose gets a close look at his #1Contender for @SummerSlam, @HEELZiggler! #SDLive pic.twitter.com/iwGpJtZ83r

While Ziggler celebrated his huge win, Ambrose came out and the two had a staredown, followed by McMahon and Bryan coming out and kind of stealing the spotlight from them. It made no sense to have those guys out there, but because it was the first episode, I’ll let it slide.

I wasn’t thrilled with Ziggler winning because I’m over him at this point. WWE has, unfortunately, made him a forgotten about guy on an otherwise stacked roster. Ziggler’s been mired in bad feuds with Rusev and Corbin and has lost all momentum with the crowd that he had as recently as one year ago.

Might this help Ziggler in the long run? Maybe. His whole character needs a makeover and he needs to branch out and become more than just a second version of Shawn Michaels. Sure, it’s a great thing to strive for, but if Ziggler can reinvent himself now on SmackDown, I eagerly await the transformation. If it’s more of the same old stuff, then I’m not sure why he won this match in the first place.

Orton returns and defeats The Miz

Randy Orton made his return to television during a Miz TV segment where the Intercontinental Champion was interviewed by himself. The Miz is certainly growing on me, and I think his character is great right now. As for the title, I’d rather see some other wrestler who could wrestle and defend it every week on television hold it.

Orton challenged Miz to a non-title match, and Maryse accepted the challenge for him. Orton won a good match with an RKO out of nowhere.

An introduction to the women’s division

Becky Lynch and Natalya continued their rivalry with a rematch from Sunday’s Battleground pay-per-view. Heading into the match, anyone could probably guess Lynch was going to get her win back from Sunday, and that’s exactly what happened. It wasn’t a great match, but Lynch made Natalya tap to the Dis-Arm-Her before dubbing herself Becky Balboa in a promo after the match.

Lynch, however, was interrupted by the rest of the women on SmackDown’s roster. First, Alexa Bliss came down and made herself known to the crowd, followed by Naomi, Carmella, and Eva Marie, who’s now known as “The Red Queen,” and actually had quite an entrance.

There are not nearly enough women on the roster to have a legitimate women’s division with a champion, so I have to believe more women will be added to the roster in the next few weeks and months.

• Heath Slater appeared and demanded to be signed, but was subsequently gored by Rhyno, who is now on SmackDown’s roster.

• Shelton Benjamin is back! A promo aired for the return of Benjamin during the broadcast. No timetable has yet to be revealed, but Benjamin will hopefully be back in a WWE ring sooner than later.

• American Alpha will make their debut on SmackDown next Tuesday night.

• Apollo Crews wins a battle royal for the sixth spot in the main event.

• Becky Lynch d. Natalya by submission via the Dis-Arm-Her.

• Six-Pack Challenge for the No. 1 Contendership to the WWE Championship: Dolph Ziggler d. John Cena/Baron Corbin/Apollo Crews/AJ Styles/Bray Wyatt by pinfall after hitting Styles with the superkick.