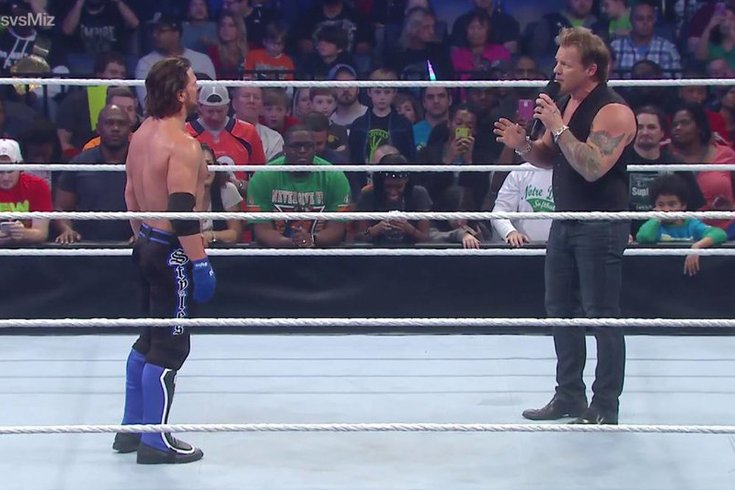 Chris Jericho challenged AJ Styles to a rematch from last week’s Raw for next week on SmackDown. Styles accepted the challenge.

We are just about two weeks away from Fastlane, and the card seems to be taking some shape to supplement the huge main event. The No. 1 contendership for the WWE World Heavyweight Championship is on the line as Roman Reigns, Dean Ambrose and Brock Lesnar battle in a Triple Threat Match in the Fastlane main event, but there’s no chance you’ll see the Beast Incarnate grace us with his presence on SmackDown, that’s for sure.

Luckily for us, we have Reigns and Ambrose making appearances on both Raw and SmackDown regularly. With Thursday night’s SmackDown emanating from the FedExForum in Memphis, Tenn., some problems started to arise between the brothers formerly of The Shield.

We also saw AJ Styles in action against The Miz, but a certain someone wasn’t quite over a defeat from last week, so he confronted Styles. What happened? Let’s get to it:

Reigns and Rusev kicked off the show with a match, which is something that I can’t remember happening in a rather long time. Both Raw and SmackDown seem to open every single week with some type of promo such that no promo and a match seemed like a nice change of pace this time around.

Although, we kind of had to see this coming, as well. Reigns was attacked by Rusev’s cohorts from the League of Nations, King Barrett and Alberto Del Rio, causing the disqualification. Ambrose made the save, but hit Reigns when he ran off the ring apron trying to nail Barrett and Del Rio. That planted a small seed of dissension between Reigns and Ambrose, something that almost occurred again during the main event.

Due to the finish of the opener, a tag team main event match was set up with Rusev and Del Rio taking on Reigns and the Lunatic Fringe. While going for a suicide dive to the outside, Ambrose missed his target and almost hit Reigns again. This time, the former two-time WWE World Heavyweight Champion was prepared, and kind of caught Ambrose and the two had a staredown. Reigns was questioning why Ambrose would go after him, which is pro wrestling 101. I have no problem with that, because it makes sense.

The staredown lasted seconds, but Reigns was able to hit Rusev with a Superman punch outside of the ring and then eventually a spear inside the ring to win the match. The two men involved in the Fastlane main event stood in the ring talking with each other as SmackDown left the air.

Kevin Owens lost to the United States Champion, Kalisto, Thursday night. That was of no help to Dolph Ziggler, who distracted Owens, allowing Kalisto to roll him up for the victory. Of course, Owens was the one who threw Kalisto into Ziggler on the outside in the first place while Ziggler was doing color commentary, so I can’t really be mad that Owens lost. The heel got his comeuppance.

The Ziggler-Owens feud has been well done so far. I could see them meeting at Fastlane, or on an upcoming Raw. Or both. Yeah, probably both.

AJ Styles and The Miz clashed one-on-one Thursday night after Miz TV on Raw didn’t end well. With Miz not giving Styles a chance to speak for himself on any subject, Styles made his presence known and took him out. He did the same on Thursday night, defeating the former WWE Champion by making him tap out, debuting his new Calf Crusher submission maneuver.

After the match, Chris Jericho, who was on commentary for the duration of the contest, came into the ring to confront Styles. He just can’t seem to believe Styles defeated him on Raw two Monday nights ago. Jericho challenged Styles to a rematch next Thursday night on SmackDown, which should actually be the main event of that show. Styles accepted and the two had a staredown.

I have a feeling this might lead to a “Best of 3” mini-series, because having Styles beat Jericho two times doesn’t make Jericho look good at all. I just doubt that WWE would allow that to happen. But, I’ve been wrong before [just kidding, that’s never happened].

That match alone certainly makes SmackDown a must-watch program next Thursday night, which is pretty awesome.

The New Day and the Social Outcasts cut a promo against each other that was rich in material and very entertaining. This was probably my favorite part:

OK this was awesome. #SmackDown pic.twitter.com/qK2k1pcZm2

The entire promo is worth watching, also. This turned into a six-man tag team match, with the WWE World Tag Team Champions cheating their way to victory again. It was actually kind of funny how it happened.

Turnabout is certainly fair play. Except when it’s cheating. These guys worked pretty well together, so I’d like to see a series of matches between these two sides until WWE figures out who will give New Day the challenge they sorely need at WrestleMania. It can’t possibly be The Usos or the Dudley Boyz again, can it?

What’s amounted to becoming more entertaining by the week, Goldust’s pursuit of R-Truth as his tag team partner has been nothing but spectacular. SmackDown may have had the best segment so far. Come on, Truth. Let’s see the Golden Truth. We need more role models we can look up to. Goldust and R-Truth make the perfect match.

Becky Lynch and Sasha Banks are on the same page… for now. With Banks completely on her own now, I think the sky’s the limit for her. I’m looking forward to how WWE books her heading intoWrestleMania, because that’s where she needs to absolutely be crowed the new Diva’s Champion.

Meanwhile, Alicia Fox lost to Charlotte in a non-title bout, and we saw some of Fox’s past character of becoming a head case show after the loss with Brie Bella trying to settle her down. One step forward, two steps backward for the Divas division.

• Roman Reigns d. Rusev by disqualification after King Barrett and Alberto Del Rio attacked Reigns. Dean Ambrose came down for the save.

• AJ Styles d. The Miz by submission via the Calf Crusher.