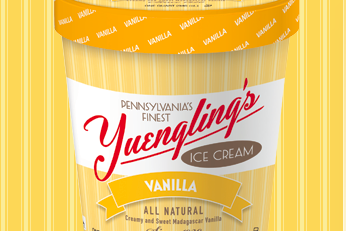 The word "Yuengling" means predominantly one thing to most Pennsylvanians: an ice cold lager brewed in our own figurative backyard. As it turns out, the Pottsville-based craft brewing titan's ice cream line also churns out a world-class product.

Nearly two months after the completion of the 2016 Los Angeles International Dairy Competition, the results are in and Yuengling's Ice Cream has received top honors for premium vanilla ice cream with its "Madagascar vanilla" flavor. In a field of more than 100 competitors, the distinction is another sign of Yuengling's rising star.

"This award means a lot to our team as it really shows how focused we are on quality and taste," said Bob Carlson, chief operating officer for Yuengling's Ice Cream, in an interview with WFMZ. "We use very select high-quality ingredients with low overrun, making our product creamier, richer, and smoother."

Ice cream and other dairy products from Yuengling date back to the era of Prohibition when the company needed a way to survive the blow to its core business. This product line continued and expanded to other locations in Pennsylvania until 1985 when it was dropped for a nearly 30-year period. Yuengling revived its ice cream line in 2014 and now offers 20 flavors.

Earlier this month, Yuengling was crowned the best craft brewery in the United States by the Brewers Association, a nonprofit trade group representing small and independent craft brewers. The company will soon embark on a historic marketing campaign to further increase brand awareness, so if you're moved to pick up some Madagascar vanilla and sit down in front of the TV, you may be treated to one of several upcoming commercials. The message? "Respect. It's Earned."