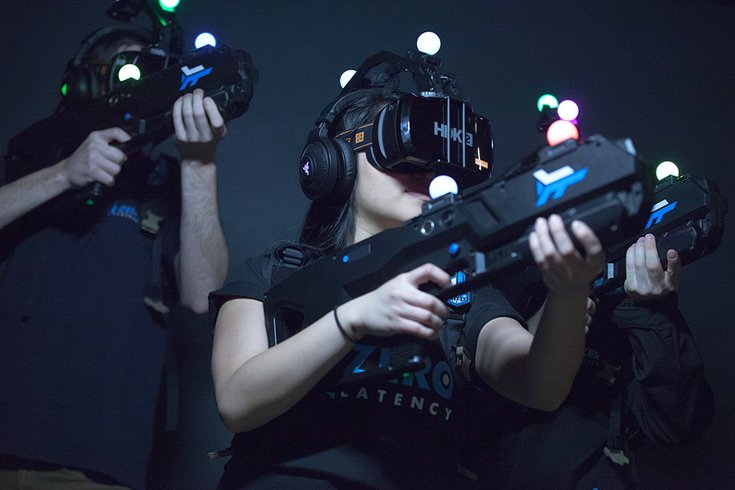 MindTrek VR says it will build a free-roaming, virtual reality gaming arena in Philadelphia in 2018. The arena will be powered on technology developed by Zero Latency, an Australian tech company.

Throwing axes is great and all, but Philly's recreational anger management scene is now primed for an even bigger come-up: a virtual reality zombie apocalypse.

MindTrek VR, an emerging leader in free-roam virtual reality gaming, announced Thursday that it will expand from its two existing locations in Massachusetts with a pair of new arenas in Philadelphia and North Jersey.

Groups of up to eight players will be able to gear up in an arena between 2,000-4,000 square feet, though the virtual game space is much larger than that. Check out a promo of Zombie Survival below.

“Virtual reality at home can be isolating and sharing the experience with a group in our gaming arenas is a real game-changer, no pun intended,” said David O’Connor, who co-founded MindTrek VR with partners Brad Wurtz and David Rzepski. “MindTrek is a leader in transforming the virtual reality gaming landscape to make it a social experience.”

MindTrek is one of the early companies heading the charge for free-roam VR arenas in the United States, where they expect to find a market that can match the enthusiasm in Japan and Australia.

Games are open to players age 13 and up, so expect this place to be tied up often by teen birthdays, military outings and people turning 30 who have no idea what to do with themselves anymore.

Attempts to reach MindTrek for information on possible locations for the Philly arena were not immediately returned. The company says the arena will open this year.