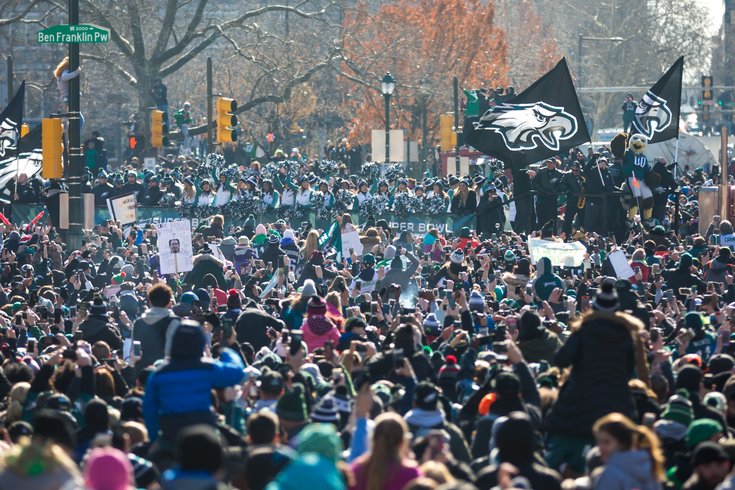 The Philadelphia Eagles Cheerleaders parade along the Benjamin Franklin Parkway at 20th Street,

For all the collective joy in which people of all races, ages, backgrounds and side of the living/dead line basked, the Eagles celebration parade was also a quintessentially personal experience.

If you were on Broad Street, you saw things that people along the Benjamin Franklin Parkway didn't.

If you were on the Parkway, your experience was not only different than people in South Philly, but from those even 50 yards away along the parade's last legs before the Jason Kelce show on the Rocky Steps.

Maybe you watched at home, or the local bar, or the balcony of a friend's place in the apartment buildings along the way. Wherever you watched them, the events of Thursday, February 8, 2018 left an indelible mark.

My family's vantage point was about 100 bodies away from the parade route between 23rd and 24th streets, just off Pennsylvania Avenue.

It will take another 52 years to scrape the Von Colln Memorial Field mud off our shoes.

We were surrounded by tens of thousands of joyous fans who didn't get rammy as it took, oh, two hours for the team – and the Lombardi Trophy – to make their five-minute appearance within eyeshot.

But here's 10 things I saw in Fairmount – the neighborhood where I watched the Super Bowl and served as my original Philadelphia living space in the McNabb era – that you probably didn't: 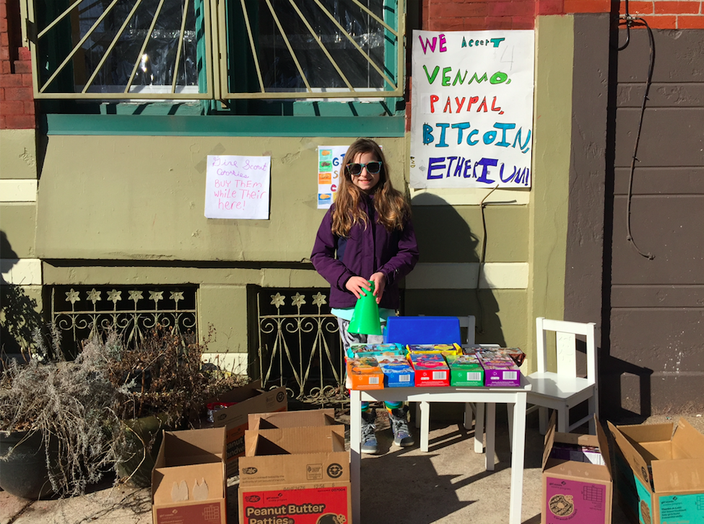 Chaya, an entrepreneurial-minded nine-year-old, sold Girl Scout cookies to people walking along North 26th Street on their way to the Eagles Celebration Parade.

Chaya is a Girl Scout. The nine-year-old lives with her family near 26th and Aspen streets in Fairmount.

As fans streamed down 26th en route to the parade all morning long, she, her mom and her little brother took to the stoop on an entrepreneurial mission.

She broke out a toy cash register, drew up signs making note of the various payment options they'd accept – from cash and Venmo to Paypal and Bitcoin – and got to work.

"We're hoping this is a good way to sell the rest of the cookies we have," her mom said. "So far, so good."

It is worth noting that, when we walked past a few hours later, there didn't seem to be any left. 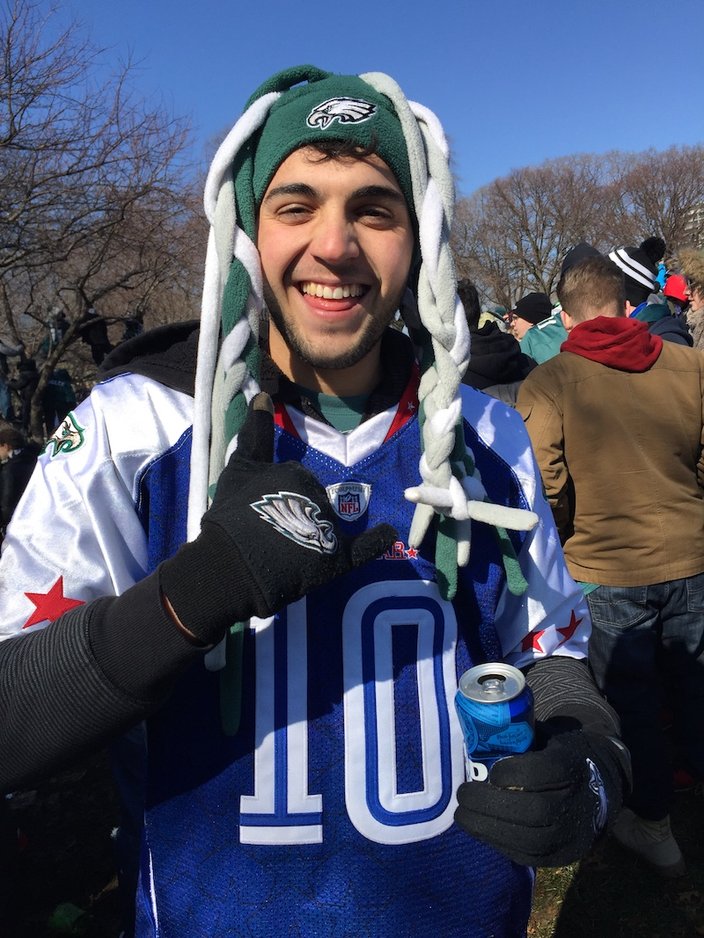 In our pre-parade coverage planning, the idea arose to snap pictures of the most unusual Eagles jerseys out that people wore to the big event.

I saw my first – a Nnamdi Asomugha 24 – around 4:45 a.m. as we waited for a train at the Fort Washington Regional Rail stop.

Then, I saw Julian Makarechi along the Parkway.

I waded through the crowd to find out how that came to be. It stems back to his preteen years.

"My first memory of football was crying after the Eagles lost the Super Bowl," the 20-year-old Center City resident said as his friend Chelsea Titlow wondered why he was getting interviewed. "It was rough. I went to Science Leadership Academy High School with fans of all different teams."

Most of those fans of different teams didn't hesitate to rub it in that their teams won Super Bowls while his didn't.

As a youth, he always liked the mercurial former Eagles receiver. He still sides with him over former coach Chip Kelly, who he thinks destroyed the team.

"Today doesn't happen unless all that happened," he said, citing a trickle-down effect of sorts in which every little thing that went right or wrong over past years set the 2017 Eagles up for their lightening-in-a-bottle success.

Back to 2010, though, when Jackson made his second Pro Bowl. That's when the jersey he wore to the 2018 parade was ordered.

His Eagles-related tears returned last Sunday with their 41-33 win over the Patriots.

"I was watching the game with my older brother, who's the reason I like football in the first place. I just started sobbing. It was amazing," he said. "I was so f***ing sick of losing. Now, we're going to repeat and repeat again after that.

"The wait was well worth it." 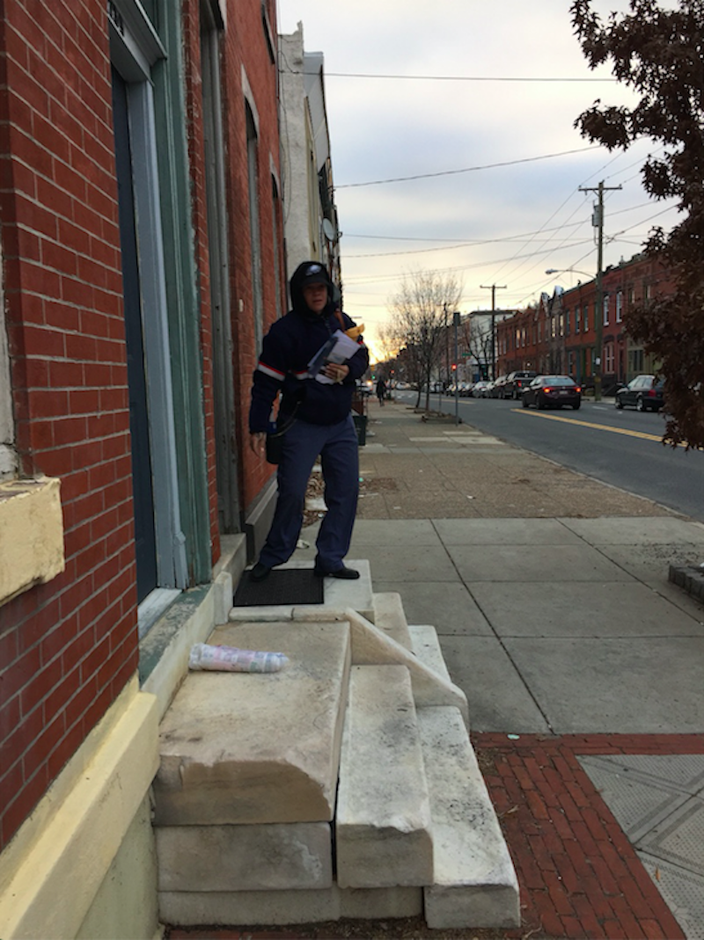 United States Postal Service letter carriers got the mail delivered on routes all around the Eagles Celebration parade. They 'treated it like a snowstorm,' said a USPS spokesman.

Not everybody was able to take off work on Thursday for the parade. Beside the police, medics, transit workers and others, there was another group of essential employees who were putting in a regular day at the job.

Neither snow nor rain nor heat nor gloom of night nor a raucous group of fans at 27th and Poplar streets in Fairmount stayed this courier from the swift completion of her appointed rounds. She was not alone.

"We were out there yesterday trying to deliver the mail as best as possible on all the routes around the parade," said Ray Daiutolo, local spokesman for the United States Postal Service. "Operationally, we tried to get out a little earlier because of road closures. Some may have changed their line of travel. Some packages may not have been able to be delivered, but overall, it was positive."

He said letter carriers "treated it like a snowstorm."

"We gave it our best effort," he said. As for the positives, letter carriers "got to experience the whole party vibe."

7. GREEN: THE ONLY COLOR THAT MATTERED

That whole thing about the Eagles being a victory for white privilege? Yeah, just as ridiculous this week as it was last.

The Eagles Won Big on Sunday and So Did White Privilege. Am I doing this right? pic.twitter.com/VACeDIWgZw

If you didn't see people of all colors, sizes, shapes and spirits celebrating in a unified fashion, you're being intentionally obtuse. 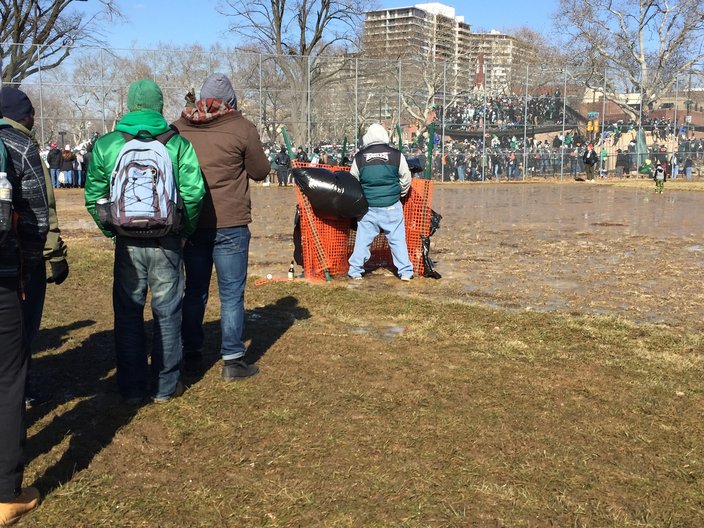 There were not enough Port-o-Potties along the Benjamin Franklin Parkway for the Eagles Celebration Parade, not by a long shot.

Dear City of Philadelphia, You did great planning a behemoth event with a deadline of a few days. I mean, sure, the papal visit and Made in America events established an outline from which you could work.

But I implore you: Next time it looks like a championship parade might be coming to town, you need to provide more Port-o-Potties. Y'know, because the mud that everybody got caked on their shoes might've been, I don't know, more than mud?

S/O to the fans who had enough class – while pissing in the middle of a baseball field – to shield their actions in a discrete way.

5. PROFANE LANGUAGE FOR A PROFANE TOWN

Jason Kelce's speech. We weren't close enough to revel in its glory. We walked back to a bar to watch the ceremony.

You should watch it again for the 5,000th time.

After having seen it unedited, I finally understood why 6ABC cut to a silent image of the Philadelphia skyline several times during its delivery.

Nanny-staters complaining about the profanity should just get back to watching their Lawrence Welk reruns. Philly's a profane town. You don't like us? We don't care. 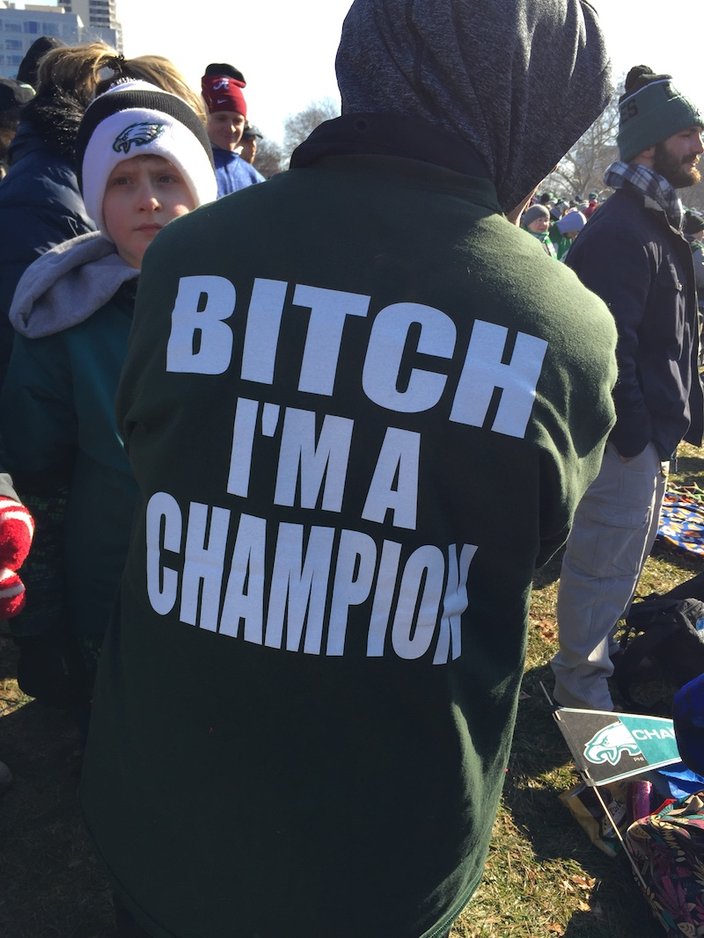 Profane T-shirts were available along the parade route.

This is a shirt that a mother behind us in the crowd bought her son.

The last time I was at St. Francis Xavier Church near Vince Fumo's house in Fairmount, it was November 2015. I was delivering a eulogy for my friend Bob Griffin, a huge Eagles fan who'd died a few days earlier.

He was the type of guy who bought a voodoo doll to cure me of my Broncos fandom. (It didn't work then; having a child who's an Eagles fan gradually eroded that defect somewhat away.)

Then, on Thursday, as the ceremony was starting, I watched in tears as Eagles fans sang along to "Fly Eagles Fly" from the steps that pallbearers carried Griff's casket to the awaiting hearse. 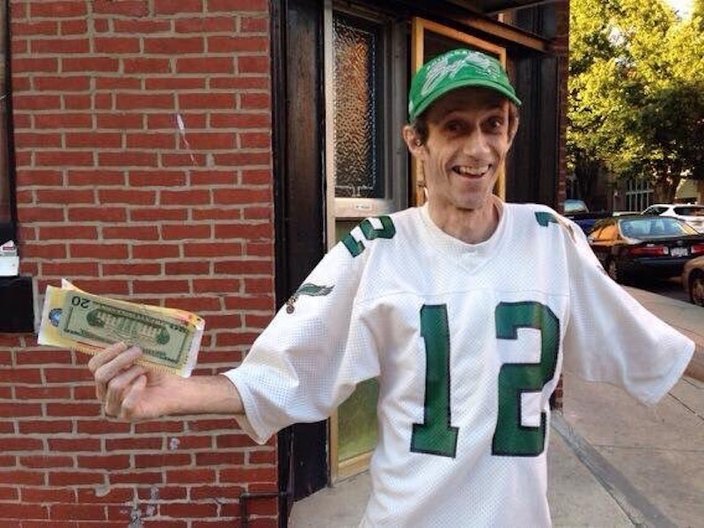 We walked by Griff's house on our way to the parade; I loudly told him that they f***ing won it. He would have loved this Eagles team. I wish he could've be there on Thursday.

My seven-year-old son couldn't make out many of the players' faces from his perch atop my shoulders. It mattered little. "There's the trophy," he exclaimed as the sun reflected off it from afar. "So awesome."

And that's what it's all about. 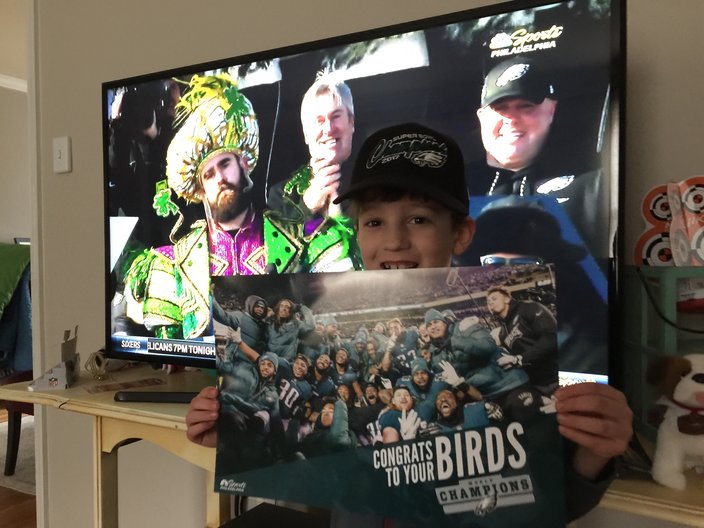 Many of my son's classmates weren't able to attend the Eagles Celebration Parade. He brought this sign into school on Friday for the class.

They didn't cancel school in our suburban district. This is fair. We're the ones that moved to the burbs last summer.

But kids in one elementary school classroom who weren't able to make it to the parade can feel like the were thanks to a sign brought back from the Parkway to hang in their classroom forever – or at least until they defend the title next year.