10 social media guidelines to save your sanity this political season 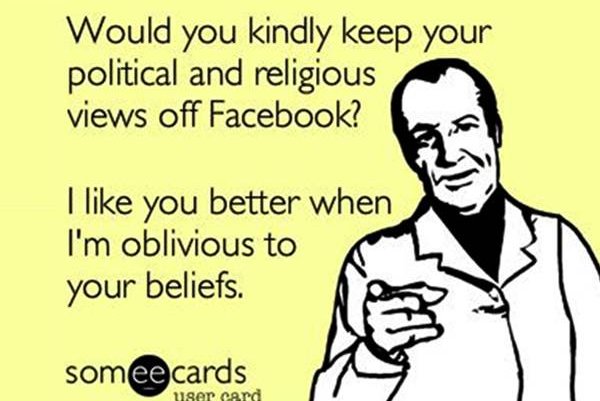 When a former co-worker of mine got into a battle royal with an acquaintance of mine that he’s never even met on Facebook, it got ugly.

It got very, very ugly.

While I tried to intervene politely (“Hey guys, be nice,” I posted) before the real heavy hitting, before I could even pour that second cup of coffee, one painful insult appeared after another. And while I wish I could say that the fury arose over a hilarious debate about who’s the better late-night host: Jimmy or Jimmy, the social media storm was predictably over what pretty much everyone’s fighting about right now: politics.

The watershed moment, one that I now refer to as The Great Idiot Party – one guy threatened to report the other to the police for reasons that still escape me – got me thinking about how much, to paraphrase George W., “free speechifying” we need or should put up with during this election season. As it happens, politics is turning even the nicest old auntie into a seething, snarling pit bull, which – let’s face it – could really put a damper on the holiday season if we let it go too far.

That’s why I came up with a handy list of do’s and don’ts for one’s social media sanity. While it’s certainly inspired by the current political stew we’re cooking in, I like to think this is a good rule of thumb for really any of the racist and misogynistic homophobes we come across on the interwebs now into the future. Of course, to enforce the list within my own little social media world, I had to do something that I swore I would never ever, ever do: block people. And here’s why:

It turns out this handy little blocking feature can do more good some days than a fistful of Prozac.

While blocking people can sometimes feel a little too “Fahrenheit 451” for my left-leaning taste, it’s often necessary if you hope to enjoy sites like Facebook in any meaningful way. That being said, as an unapologetic liberal, I value free speech above most everything. It is at the very core of what makes this country great – when it actually works. Free speech inspires free thought, something that we can never have too much of during an election cycle like this one. But what happens when (and this is where it gets tricky) free speech turns into so-called “hate speech” or, better yet, when free speech on social media spirals into unintelligible insults that you wouldn’t want even your most potty-mouthed friend to have to read?

Despite my initial fear over blocking, an internal debate that had my liberal soul in a bit of a quandary – was I doing the very thing that I criticize most in conservatives on their moral high horses? Or was I paving the way for smarter, more intelligent discussions that can surely get lost in a haze of junior high-level insults?

It turns out this handy little blocking feature can do more good some days than a fistful of Prozac.

To make sure I can sleep at night (and not in a bed of liberal guilt – I already have plenty of that) I decided to create a set of guidelines that would allow me to avoid the meanies while making sure to welcome discussions (including and especially the uncomfortable ones) from people of all stripes. Maybe it’s because I know all too well what it feels like to be a liberal outsider in a conservative hometown (I’m originally from what Philly likes to call “Pennsyltucky”), but there’s danger in living in a bubble, even a beautiful liberal one that seems to exist around the City of Brotherly Love.

By welcoming diverse debate that culls the smart, challenging stuff from the poo-flingers (you know who you are), we all end up with better quality content that makes us communicate and, ultimately, think. At most, a thoughtful discussion void of said poo could change our minds; we may learn something new. At the very least, we may strengthen our own beliefs that much more.

Since adopting these 10 so-called “rules of social media political etiquette,” I’ve spared myself (and both my red and blue state-living social media friends) from having to deflect the equivalent of emoji turds as we come down to the wire in November. I like to think we’re all happier for it, that’s why I wanted to share them:

1. Delete anyone who regularly (as in: all the time) adds racist, misogynistic and homophobic rhetoric to posts that have absolutely nothing to do with race, gender or sexuality. We’ve all had shocking encounters with these people, trying, perhaps, to reason with them, only to end up having to explain infinitely why the “Black Lives Matter” movement is not a terrorist organization that wants white people dead and that transgender people do, in fact, have a right to pee in public, too.

2. The same goes for shit starters. If someone purposely posts content designed to enrage people they don’t even know (and they do it on a post you shared in earnest), put out that fire right away. Misdirected anger coming from “mom’s basement dwellers” never inspires meaningful discussions. It just detracts from the real issues, like who’s watching the new season of "American Horror Story."

3. Be suspicious of people who use religious scripture to make their points. While most of the time these folks are harmless in the way your grandmother might want you to join her at church, they can sometimes veer into a murky realm wherein they condemn anyone and everyone who does not believe as they do. I’ve never blocked anyone who spouted “the good word,” but I have put them on the equivalent of an FBI Watch List.

4. The same goes for anyone who disrespects religion. I like to remind people that freedom from religion requires freedom of religion. It’s especially maddening when so-called Christians take it upon themselves to generalize about Jewish and Islamic people, pretty much anyone who may be different from themselves. This is fair game for merciless debate in my book – go after them, tell them why they’re wrong, and make sure you stand up for those they are mocking, hating on, whatever. If you’re at a loss, there are lots of apropos "Daily Show" clips to share. Lots.

5. Don’t respond to people who simply want to pick a fight. Ignore them. Trust me – that pisses them off more than anything else.

6. Be patient with people who have been spoon-fed a lot of garbage from media outlets and not-so-media outlets, like a distant cousin’s anti-authority blog from which they regularly quote. You may also recognize these people from their conspiracy-laden posts with non-fact-checked sources and weird URLs. You never want to click on the URLs because if they aren’t spam they will undoubtedly take you to the most graphically challenged home pages you’ll have ever want to see, the stuff of alien abductions. And, let’s face it, you probably don’t want to get into yet another discussion about President Obama’s birth certificate, do you? It’s pointless. Move on.

7. Don’t expect too much from former classmates. If you’ve lost touch for decades and are only reconnecting on Facebook, there’s a good chance you don’t have much more in common than the time you both blew up the Bunsen burner in chemistry class. Then again, you could make a new friend all over again. It’s a gamble.

9. If you start feeling guilty about blocking your weird cousin with the cute kids who you suspect may belong to one of those radical Tea Party groups, please remind yourself that he is bonkers. While you may enjoy the family pics he posts – or even those Flashback Friday shots (yeah, you’ll miss those – dude had a raging mullet) but he’s also the same guy who felt the need to hijack the funny Hillary meme you shared (you know, the one where she’s texting with Beyonce) with some rant about why “marriage is between a man and a woman.” If he can’t appreciate a good Bey joke, you don’t need him in your social media life.

10. Finally, lighten up. It’s easy to get sucked into a social media vacuum where your blood pressure rises unnecessarily and you may say something you regret (it’s a lot like drunk texting). Don’t be that person. Don’t be your weird cousin or racist co-worker. Rise above it and, whenever possible, share something interesting and informed. Chances are someone out there is reading – whether they comment or not.