Would you pay $120 for a cheesesteak? 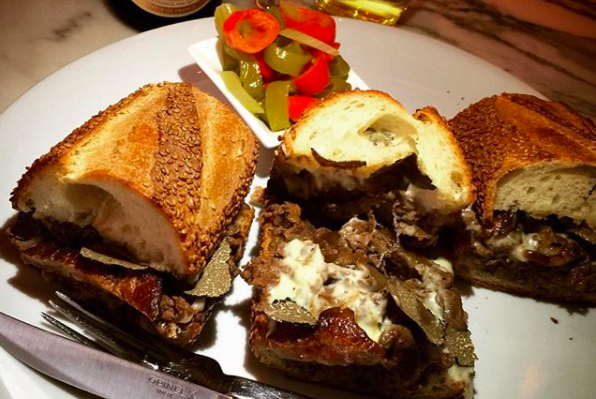 The $120 cheesesteak at Barclay Prime.

Today in lifestyles of the rich and the famous, we bring you a cheesesteak that will cost you 12 times the cost of your average cheesesteak.

The nearly three-year-old story of Barclay Prime's cheesesteak is being rehashed after the menu item was featured on a recent episode of CNBC's "Secret Lives of the Super Rich."

In the episode, we meet Frankie and Alisa Frederico, who are willing to shell out $120 on a regular basis for the upscale Philadelphia steakhouse's version of the sandwich.

Barclay Prime's cheesesteak, which comes with a half a bottle of champagne, is made with A5 wagyu ribeye steak, foie gras and a truffle cheese whiz, all of which is on a sesame bun. In the episode, Frankie estimates he's had the cheesesteak at least 30 times.

Going with the low-end estimate, that means he has shelled out at least $3,600 for cheesesteaks. That's enough money to buy a cheesesteak almost every single day of the year, assuming the cheesesteak you’re buying is around $10.

The $120 cheesesteak built for a king from CNBC.

Is it worth it? The answer is probably relative. Frankie, a wealth manager, and Alisa, a prominent fashion designer, wouldn't be on a show about "Super Rich" people if they weren't doing well for themselves, so $120 for what's typically a cheap meal might be a drop in the bucket to them.

But what for the rest of us? Is it worth it for the not as affluent foodie? I, for one, certainly don't have an extra $120 to try it and tell you. Food critic Nick Solares said in 2015 he was "conflicted" about the sandwich, because while it's "ridiculously expensive" it's one of the "greatest sandwiches" he's ever eaten.

Almost every Yelp! review of the sandwich essentially says it's more or less worth it. "I can't describe in full detail, but this was one of the best things I've ever eaten in my life," wrote one reviewer. "No sandwich is worth that much but this was the best damn steak sandwich i have ever had in my life, hands down - it was fantastic," wrote another.

And one reviewer left a tip not advertised by the STARR Restaurants steakhouse: If you don't drink or simply don't want the bottle of champagne, the price is dropped to $95.