What they're saying: 10 options for Flyers in first round of 2018 NHL Draft 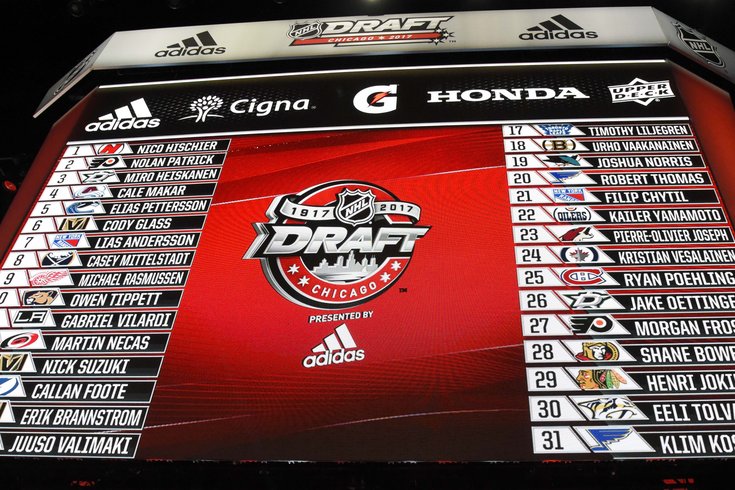 Who will the Flyers pick with each of their two first-round picks this year?

The 2018 NHL Draft kicks off on Friday with the first round, and just like last year, the Flyers will have a pair of picks on opening night. They'll back that up with seven more picks on Saturday.

In 2017, Ron Hextall and Co. were lucky enough to land the second-overall pick — that turned into Nolan Patrick — and then pick again at 27th overall. This time around, they're more or less splitting the difference, with their first pick of the night coming at No. 14 overall, followed by a second pick just five spots later (19th overall).

Here's a look at 10 players — five forwards and five defensemen — who should be in the mix for the Flyers in the first round of the 2018 NHL Draft (and what people who know a lot more about hockey than I do had to say about them)...

So what do we have in Kupari? We have perhaps one of the five best players in this draft in overall offensive skill. He has quick hands and can change the angle in the blink of an eye making a goaltender’s job extremely difficult. He has a rocket of a shot and isn’t afraid to fire from anywhere. When he has the puck on his stick, he’s very aggressive in attacking the middle.

As good as Kupari’s offense is, his defense is well, being worked on. He needs to get stronger especially if he wants to play center in the NHL. He also must develop consistency from game to game. Too often watching games you could see he’d let the foot off the gas. He’s too talented to go invisible as often as he did. He is at least 2-3 seasons away from the NHL. But goodness, teams who invest in this young man might get a huge payoff later with proper development. [thehockeywriters.com]

Left wing Joel Farabee (#28) is one of the top forwards eligible for the 2018 NHL Draft. A native of Syracuse, NY, Farabee is a complete player who is a threat to score in any situation. He is incredibly smart and scores in the clutch. Farabee is one of the top scorers on Team USA's under-18 team and will play for Boston University next season.  [thedraftanalyst.com, via YouTube]

There’s a lot to like about Isac Lundestrom’s game. His skating isn’t on an elite level but it’s definitely one of his best attributes. He’s able to push defenders back and enter the offensive zone with his skating alone at times. He’s shifty and can weave his way between defenders with his top end speed. His edge work is also impressive and it will be interesting to see if he can improve upon that even more. [broadstreethockey.com]

Kaut is a pure goal scorer. His powerful skating ability allows him to drive the net. When he gets there, he has the quick hands to make moves in tight. He can also score by pouncing on rebounds or tipping in shots. Kaut has a very good wrist shot. It is accurate and powerful. He can fool goaltenders from further out with a quick release. Kaut’s snapshot is also above average. He can work on his one-timer though. A smart player, Kaut finds the soft spots in the defence to be open for these shots...

Kaut has the skills to be a top-six winger at the NHL level. He will need time to develop and add muscle and strength before he is ready for the pro game. He also needs to continue to refine his first few steps and his one-timer. Stylistically Kaut’s game is similar to Marian Hossa, but this is not a reflection of his potential or ability.  [lastwordonhockey.com]

Hayton doesn’t carry high-end potential but is a safe bet to be an effective NHL player. Though, it’s hard to get a read on exactly how strong of a prospect Hayton is because of his junior situation. The centerman plays on the Sault Ste. Marie Greyhounds, who had a 23-game winning streak this season, and one has to wonder if his numbers were inflated as a result...

There is plenty to like about the 6-foot-1 center’s game. He has good puck skills and knows how to use his body in puck battles and to protect the puck in the offensive zone. An intelligent player with a strong wrist shot. His skating is an area he’ll need to improve upon, though.  [nbcsports.com]

2018 NHL Draft: When it starts, how to watch, and when the Flyers pick

Ty Smith’s greatest attribute is without a doubt, his hockey IQ. Smith has a knack for seeing plays develop and finding the open man, or taking the perfect angle on an attacking forward in the corner. He is, in my opinion, the best draft prospect that no one is really talking about.

While he doesn’t have blazing speed, Smith is an incredible skater and a big reason for that is how much he keeps his head up. He’s always looking ahead for passing lanes to develop or that long outlet pass to send a teammate on a breakaway. This ability to keep his head up seemingly at all times gives him an edge over many opposing forecheckers. He’s able to slow the game down and speed it up seemingly at will. In doing so, Smith is able to create many controlled zone entries whether it be individually, or with a crisp pass at the line. In the Canada vs. United States game at the U18 World Junior Championships, on multiple occasions on the power play Smith was able to gain the line with speed, then slow the game down and find an open man.  [broadstreethockey.com]

Bode Wilde is a talented and competitive defender that plays a tenacious 200-foot game. His balance and acceleration in-stride is noteworthy and he is never caught in no-man’s land, or doing nothing. He is proactive and hard-nosed in pursuit if puck control, and he reads queues in all three zones naturally and quickly. Defensively, he is a beast and always looks to take time and space away from the opposition. He erases the open lane, keeps opponents to the outside, and is physical along the wall. In-transition, he is able to make that outlet pass or, more than likely, take it up himself to set up the trap. Offensively, he showcases a very hard, accurate shot that leaps off his stick. He can also open up space by way of his skating ability, size, and handling of the puck. Thanks to his quick thinking in making the high-percentage decision, he can be very difficult to read and play against. All-in-all, Wilde is a smart, competitive, and sizey two-way D-man that can provide a team with numbers on the board and stability on the ice.  [eliteprospects.com]

Sandin is a nimble puck-moving defenseman with outstanding agility and closing speed. He is a reliable option for breakouts since he can beat back a forecheck with either his wheels or crisp, timely passes. It wasn’t easy playing as a rookie import on a loaded team, but Sandin’s transition from Rogle in the Swedish Hockey League to the Ontario Hockey League was beyond seamless. In fact, the young rearguard did not take long to distinguish himself among the Soo’s talent-heavy blue line, and by season’s end was playing big minutes and quarterbacking the top power-play unit.  [thedraftanalyst.com]

Merkley just finished up his second season with Guelph, which selected him with the No. 1 pick in the 2016 OHL draft as a no-brainer. In his first OHL season, Merkley scored 12 goals and 55 points in 62 games. This season, the righty netted 13 markers and 67 points in 63 games. The offensive numbers are gaudy as they were in Triple-A midget hockey when he was “heads and shoulders above everybody else.” Merkley is an elite offensive defenseman prospect with major concerns in his own end and has been labeled as a player who cheats a bit to produce offense. Plus/minus is a flawed stat but in two seasons in the OHL, Merkley is a minus-70. That’s telling.

A major concern with Merkley is his character and maturity. He had a public argument with his former coach in Guelph last season, according to Sudbury Star. He was reportedly cut from Team Canada’s U-18 team because of a conflict. It could be chalked up as a teenager being a teenager, but some teams could be scared away from spending a high pick on him.  [nbcsports.com]

Forward-turned-defenceman, K’Andre Miller could be a special pick in the upcoming NHL Draft. He has size. He has skill. He skates among the best of them and he’s had the chance to play both up front and on the back end...

Wherever Miller is drafted, there’s another step in his plan to making the NHL that will land him at the University of Wisconsin next season as he looks to play at the NCAA level. Either way, this probable first-round pick has a great shot at crack the NHL at some point in the coming years.  [thehockeywriters.com]