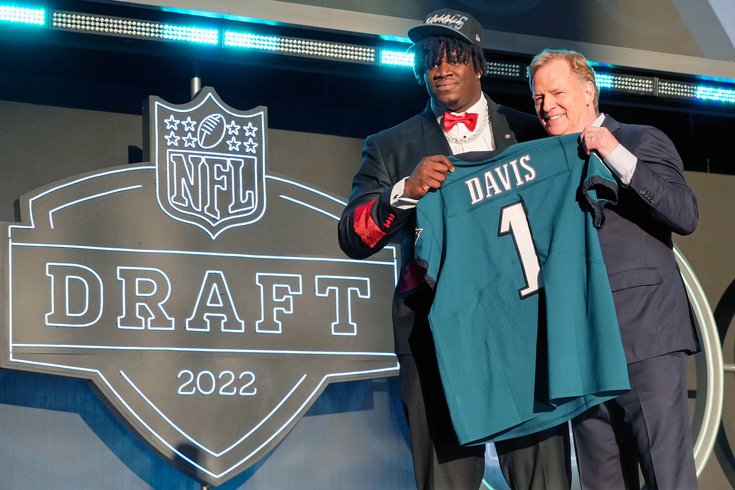 UPDATE [10:25 p.m.] — And with the 83rd overall pick in Round 3, the Eagles' linebacking corps got a boost. The Birds took Georgia linebacker Nakobe Dean, after he fell way down the board.

Got my boy @NakobeDean with me! Delayed not denied bro 💯 let’s show Philly how we do it 😁 #FlyEaglesFly #GoBirds

UPDATE [8:37 p.m.] — The Eagles took Nebraska center Cam Jurgens with the 51st pick in the draft, making a move that will prep the Eagles for a post-Jason Kelce era. The veteran center is returning for another season, but has contemplated retirement the past several offseasons.

In the first round of the 2022 NFL Draft, Howie Roseman and the Philadelphia Eagles made a pair of bold moves, initially trading up for Georgia DT Jordan Davis, and then trading for star wide receiver A.J. Brown.

Things are likely to calm down a bit on Day 2 and beyond, as the Birds now only have four picks left. It's a huge draft for Howie Roseman and the Eagles, who still have plenty of roster holes to fill, even after unexpectedly making the playoffs in 2021. Can the Eagles continue to find young talent that will serve as the core of a contending team going forward?

Here's a place for you to discuss the first round as it unravels. If you haven't already bookmarked our 2022 Eagles draft board, it's not too late, as we'll be updating that throughout the entire draft.