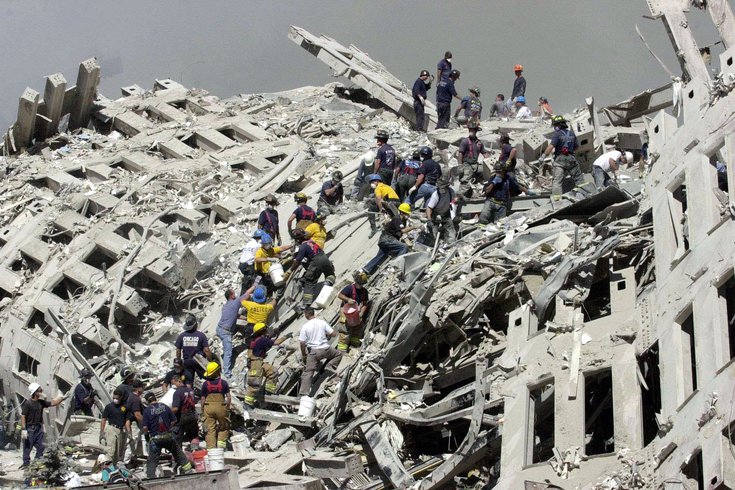 The early responders to the World Trade Center site encountered the highest concentrations of smoke and dust. Research shows they are more likely than other responders to have weakened lung function 20 years later.

Rescue and recovery workers who were at the World Trade Center in the days after the Twin Towers collapsed are at higher risk of developing chronic obstructive pulmonary disease, researchers warn.

In a study presented at the virtual European Respiratory Society International Congress, researchers reported that many early responders are developing the chronic lung disease, most often after being diagnosed with asthma. Almost 18,000 workers and volunteers were included in the study.

The workers who reported in the first two days after the attacks — when smoke and dust concentrations were at the highest — were the most likely to have weakened lung function, researchers found. About 3.3% of responders have developed COPD, with the earliest responders being 30% more likely to have it.

These results came after researchers made adjustments for tobacco smoking and obesity.

Almost 25% of those diagnosed with COPD were non-smokers. Additionally, a previous asthma diagnosis may be predictive of COPD among the responders, researchers found. About 40% of responders had features of both COPD and asthma.

"Many of these workers were non-smokers and in their early 40s in 2001, and COPD is rare in that age group," said Rafael E. de la Hoz, of the Icahn School of Medicine at Mount Sinai in New York. "Twenty years on from their work at the World Trade Center site, and despite decreasing rates of smoking, we are starting to see cases of COPD emerge."

The responders at greatest risk are those had asthma and worked at the site in the first several days, de la Hoz said. He has been working with such workers since 2002, treating airway disorders through a combination of lifestyle changes, reducing occupational exposures and pulmonary rehabilitation in an effort to prevent more severe lung disease.

"We know that emergency workers who arrived in the aftermath of the World Trade Center disaster face higher risks of airway diseases, such as asthma, chronic non-specific bronchitis and bronchiolitis, probably caused by the smoke and toxic dust that persisted in the air days and weeks after the attacks," de la Hoz said.

"It's important that we continue to monitor these workers to understand the long-term impacts of their exposure while working on the site because some conditions can take many years to develop."

Each of the 17,996 study participants who worked at the World Trade Center site had their lung health measured using spirometry tests at lease twice between 2002 and 2018. These tests are designed to measure how much air a person can exhale in one forced breath. They are frequently used to diagnose COPD and asthma.

Data also was collected on the time period that participants worked at the World Trade Center site, their ages, weights and smoking histories.

Many studies have been conducted on the health impacts of the World Trade Center recovery efforts, but there still isn't a complete picture of the long-term health effects.

The New York City Health Department WTC Health Registry has been studying these long-term health effects. According to its data, the most common health effect has been symptoms of post-traumatic stress disorder.

However, registry enrollees also have reported depression, alcohol and tobacco use, asthma, declines in lung function and increased risk for heart disease. Ten years after the World Trade Center attack, many enrollees were still reporting breathing difficulties, including wheezing and coughing and the need for an inhaler.

The World Trade Center Health Program was established after the attacks to monitor 9/11 responders health and provide treatment when necessary. One analysis of program data shows that 45% of enrollees have an airway or upper digestive tract illness, 16% have cancer and another 16% have mental health illness.

Analyses also have shown that the firefighters who responded to the World Trade Center on the morning of the attacks were 44% more likely to develop cardiovascular disease than those who arrived the next day.

A 2018 study found that Ground Zero recovery workers have reported musculoskeletal injuries and gait deterioration that are still impacting their health years later.