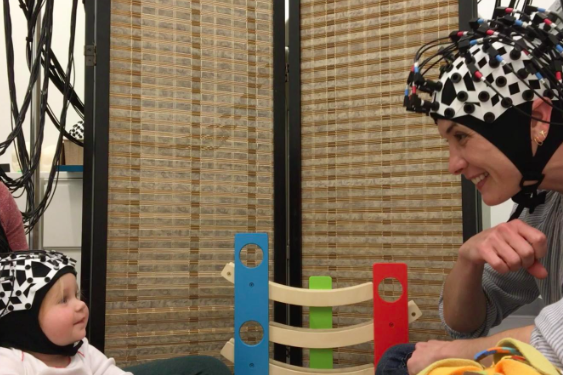 Parents who feel an uncanny mental connection with their infants may not be imagining things, according to new research out of Princeton University.

The Princeton Baby Lab recently conducted a study to examine the interaction of brain function between adults and infants during face-to-face interactions, hoping to gather insight about the social development and learning processes of the infant brain.

"Previous research has shown that adults' brains sync up when they watch movies and listen to stories, but little is known about how this 'neural synchrony' develops in the first years of life," said Elise Piazza, a scholar in the Princeton Neuroscience Institute and the first author a paper published in Psychological Science.

For the current study, one adult interacted with 42 different babies who participated while supervised by their parents.

Only 18 babies were able to provide usable data. The rest were disqualified for "excessive squirming" or refusal to wear the cap.

Among those who participated, researchers tracked the neural coordination of the adult and each baby while they played with toys, or while the adult read a book and sang songs. The study also recorded data while the adult turned to the side and the baby interacted with his or her parent.

The caps collected neural activity from 57 channels of the brain related to prediction, language processing and understanding other people's perspectives.

To the researchers' surprise, they found the greatest coupling of the adult and baby in the prefrontal cortex, a region involved in learning, planning and executive functioning. This was previously thought to be underdeveloped during infancy.

Several other regions were synchronized between the babies and the adult, but the most interesting takeaway was that in many instances the baby's brain was ahead of the adult's brain.

"We were also surprised to find that the infant brain was often 'leading' the adult brain by a few seconds, suggesting that babies do not just passively receive input but may guide adults toward the next thing they're going to focus on: which toy to pick up, which words to say," said Lew-Williams, who serves as co-director of the Princeton Baby Lab.

The researchers hope to use this design in future studies that may help explain why coupling and communication break down in children with autism or other atypical features of brain development.

"While communicating, the adult and child seem to form a feedback loop," said Piazza. "That is, the adult's brain seemed to predict when the infants would smile, the infants' brains anticipated when the adult would use more 'baby talk,' and both brains tracked joint eye contact and joint attention to toys. So, when a baby and adult play together, their brains influence each other in dynamic ways."