Born without a uterus, Philly-area woman births milestone baby thanks to transplant at Penn Medicine 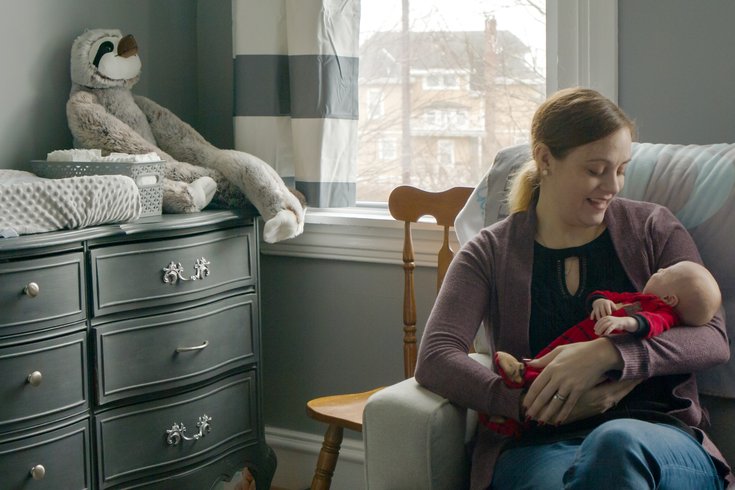 Jennifer Gobrecht holds her baby, Benjamin, the second child born in the United States via a uterus transplant from a deceased donor. As a teenager, Jennifer Gobrecht, who was born without a uterus, never thought she would have the opportunity to carry her own child, but Penn Medicine's ongoing Uterus Transplantation for Uterine Factor Infertility trial made it happen.

At age 17, Jennifer Gobrecht was told that she never would be able to carry her own baby due to a rare congenital condition that left her without a uterus.

But a lot can change in 16 years. And in November, Gobrecht gave birth to her first child, Benjamin Thomas Gobrecht, via a cesarean section delivery thanks to uterus transplant she received in 2018.

Benjamin Gobrecht is just the second baby born in the United States following a uterus transplant received from a deceased donor. He is the first born as part of an ongoing Penn Medicine trial aiming to expand the number of transplant options for women with Uterine Factor Infertility, a previously irreversible form of female infertility.

"My husband and I have always wanted to grow our family, but we knew the limited options meant it might never happen," Jennifer Gobrecht said. "And now here we are, in spite of everything, holding our beautiful baby boy. Benjamin is a perfect miracle."

Gobrecht, who lives in the Philly suburbs, was born with Mayer-Rokitansky-Küster-Hauser (MRKH) syndrome, a congenital condition in which women have functional ovaries but lack a fully formed uterus. The rare condition, affecting about 1 in every 4,500 females, prohibits women from becoming pregnant or carrying a child.

But thanks to breakthroughs in organ transplantation, some women may now be able to do just that.

There have been about 70 uterus transplants worldwide – mostly from live donors.

But Penn Medicine is exploring the possibilities of using organs from both live and deceased donors through its Uterus Transplantation for Uterine Factor Infertility (UNTIL) trial, which launched three years ago. This will allow researchers to compare the outcomes of different donor types and potentially expand the pool of organs.

"For women with Uterine Factor Infertility, uterus transplantation is potentially a new path to parenthood – outside of adoption and use of a gestational carrier – and it's the only option which allows these women to carry and deliver their babies," said co-principal investigator Dr. Kathleen O'Neill, an assistant professor of Obstetrics and Gynecology at Penn's Perelman School of Medicine.

A team of more than 20 specialists helped deliver Benjamin Gobrecht at the Hospital of the University of Pennsylvania. But the family's journey began more than two years earlier. 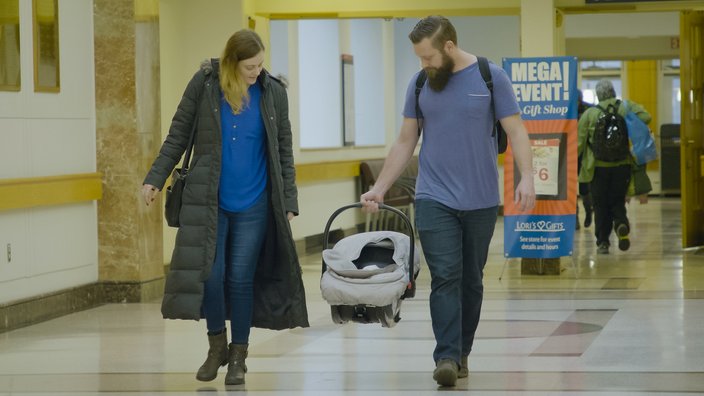 Jennifer and Drew Gobrecht take their baby, Benjamin, home from the Hospital of the University of Pennsylvania. Benjamin is just the second U.S. baby born via a uterus transplant from a deceased donor.

Over time, Jennifer Gobrecht had joined various online support groups for women struggling with infertility, particularly those with conditions similar to hers. She and her husband, Drew, had been considering using a gestational carrier when someone shared a link about the Penn Medicine trial.

"It sort of seemed like a long shot," Gobrecht said. "But it wasn't, apparently."

Gobrecht underwent an extensive medical evaluation prior to becoming the first patient enrolled in the Penn Medicine trial. She and Drew already had undergone in vitro fertilization while exploring the possibility of using a gestational carrier, so they had cryopreserved embryos available to be transferred once she received a uterus transplant.

Gobrecht eventually underwent a 10-hour transplant procedure in the fall of 2018. The Gift of Life Donor Program facilitated the organ donation.

The donor – another mother who had passed away – saved three other lives through her donations and helped bring another into the world.

"My daughter was the best mother I ever knew; nothing was more important to her than her children," the donor's mother said in a statement. "What a beautiful and fitting legacy for her to help give the gift of motherhood to another woman. Our hearts and prayers go out to my daughter's recipients and their families."

Six months after reaching the transplant, an embryo was implanted inside Gobrecht's uterus. Ten days later, the couple received a call confirming that Jennifer was pregnant.

"You live so many years being told you'll never be able to be pregnant," Jennifer Gobrecht said. "And never is such a strong word. ... It was the best moment of my life up until that point, to have heard those words that I thought I would never hear."

Gobrecht eventually began to feel Benjamin kicking inside her, fulfilling a dream she had once abandoned. It turned out, Benjamin was quite active in the womb.

"Those experiences, they feel so mundane, but to us they were the best things in the world," Gobrecht said.

The experiences only became more surreal once the baby was delivered.

The Gobrechts learned the sex of their baby after its birth, drawing out the suspense. The couple cried as they informed the doctors of its name. Drew held Benjamin in the operating room, watching his son look around the room.

"There's so much emotion wrapped up in this because of how long it took – the whole process," Drew Gobrecht said. "It was like an emotional dam had been released of just every feeling that I've had. I (had) tried keeping it together, because you have to go about living your life. But it all came out in that moment. It was very, very surreal." 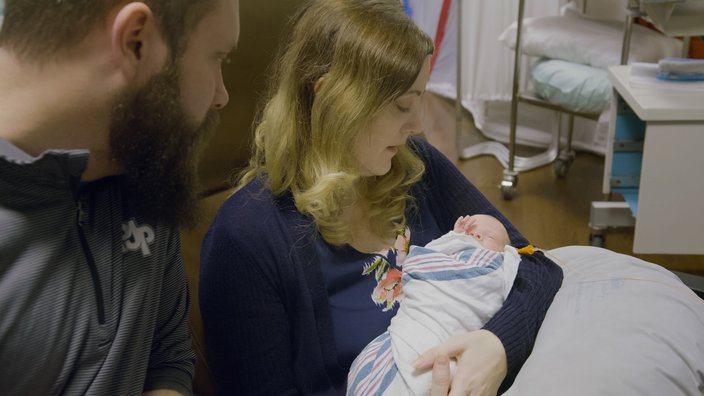 Drew and Jennifer Gobrecht gaze at their baby, Benjamin, who was born as part of Penn Medicine's Uterus Transplantation for Uterine Factor Infertility trial.

'INFERTILITY IS A DISEASE'

By sharing their story, the Gobrechts said they hope to help expand access to uterine transplantation to more women with Uterine Factor Infertility.

"When I signed up for this trial, I hoped it would help my husband and me start a family, but I also strongly believe in helping others," Jennifer Gobrecht said. "My hope is that through this research, others with similar struggles will have the same opportunity."

Though eight U.S. babies have been born via mothers who received a uterus transplant, including six from living donors, the UNTIL trial remains the only uterus transplant trial actively enrolling patients.

Trial investigators plan to perform five total uterus transplants, each in hopes of delivering a baby. They have performed two transplants so far, including Gobrecht's.

Adoption and using gestational carriers remain options for other women with Uterine Factor Fertility. But assuming those two paths to parenthood address the problem in its totality is naive, O'Neill said.

"Infertility is a disease; it is not an inconvenience," O'Neill said. "And it is a disease that needs treatment."

The trial allows researchers to study the participants throughout pregnancy, both to ensure safety and to examine how cells from different individuals interact and impact pregnancy. It also may help them better understand various common pregnancy complications.

"Like pregnancy itself, uterine transplant is not without risk," co-principal investigator Dr. Paige Porrett said. "But our trial demonstrates that it is safe, it is effective and very importantly it is reproducible in terms of successful outcomes."

As part of the UNTIL trial, Gobrecht and her son will receive extensive follow up exams. The 5- to 10-year research period spans IVF, transplantation and birth to long-term follow-up after delivery and transplant removal. More than 35 medical providers are involved in the process.

But the entire process was worth the joy of carrying and birthing her baby, Gobrecht said, adding that she often tears up just looking at Benjamin.

"Every option for parenthood is important and here's just a new one that is available for women who were told no and never," Gobrecht said. "Here's this new option that can give you hope where hope wasn't."