'We always learn from these events,' deputy commish says 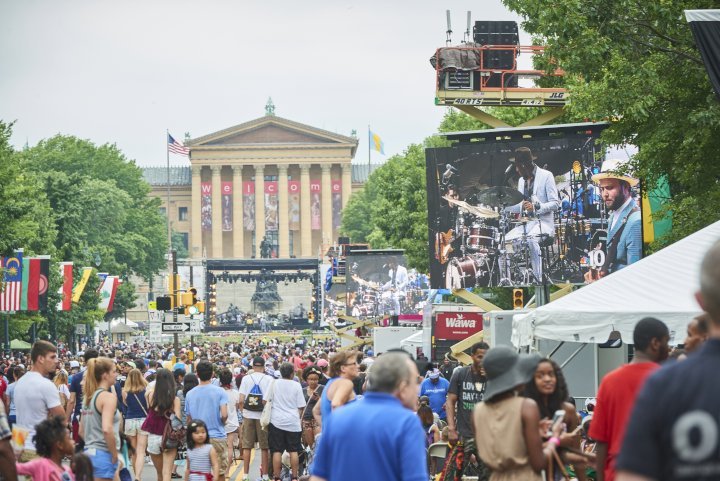 In this file photo, thousands of people enjoy the annual Welcome America! Festival, which concludes with a concert and fireworks display on the Benjamin Franklin Parkway.

The Philadelphia Police Department will re-examine the way it handles security for mass events on the Benjamin Franklin Parkway after the mass shooting in Las Vegas Sunday night.

Deputy Commissioner Dennis Wilson stressed that the department already has "a lot of layers" in place for every large-scale event. National Special Security events – like the papal visit and the Democratic National Convention – brought new policies for policing massive events in Philadelphia.

A sniper perched in a high-rise hotel room along the Strip opened fire on tens of thousands of people attending a country music festival. The automatic fire unloaded by Stephen Craig Paddock, 64, killed 58 people and injured at least 515 others, authorities said.

SWAT teams that stormed the gunman's hotel found Paddock had killed himself. The shooting marked the deadliest mass shooting in U.S. history.

But Wilson said massacres like the one in Las Vegas always prompt law enforcement officials to take a closer look at their own policies.

"Every department is doing this. Our policing evolves as the threat evolves. We always learn from these events."

In such situations, Philadelphia police are trained to rapidly respond to the shooter, Wilson said.

"We want to engage the shooter," Wilson said. "The first few officers on the scene form a contact team. They've all been trained. ... They immediately will go after the shooter. We'll have additional contact teams, as well as rescue teams."

Concerts like Wawa Welcome America and the Made in America Festival draw tens of thousands of people each summer to the Benjamin Franklin Parkway, a thoroughfare overlooked by several high-rise buildings.

Prior to massive events, detectives investigate each of those buildings, Wilson said. An aviation unit is deployed to keep an eye on rooftops. And there are countersurveillance officers stationed within the crowd.

"We're looking at everything – every tip, every threat," Wilson said. "We have teams of investigators that are looking at this. They don't wait until the morning. If it comes in the middle of the night, they're going to conduct a very fast investigation."

Additionally, there are "blowout gates" at each event that quickly can be torn down to help large crowds disperse in an emergency situation, Wilson said.