After last night's deluge, the rain is back – and hail, too 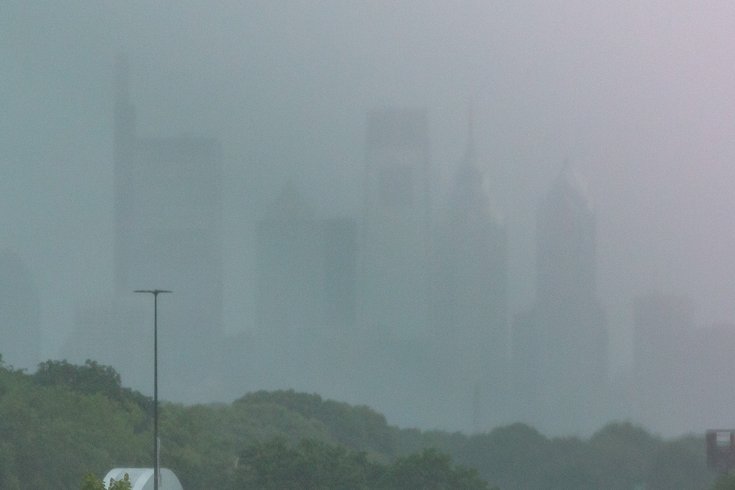 Hours after a potent storm system dropped as much as 5 inches of rain in some places overnight, the threat of several more inches – and perhaps hail – remains later today across most of the region.

The National Weather Service declared a severe thunderstorm warning until 3:30 p.m. as a line of of storms moved east at 30 mph into Center City Philadelphia, bringing drenching rains that had pedestrians on Walnut Street scurrying for cover under their umbrellas. Forecasters had warned of 60 mph wind gusts and penny-sized hail. 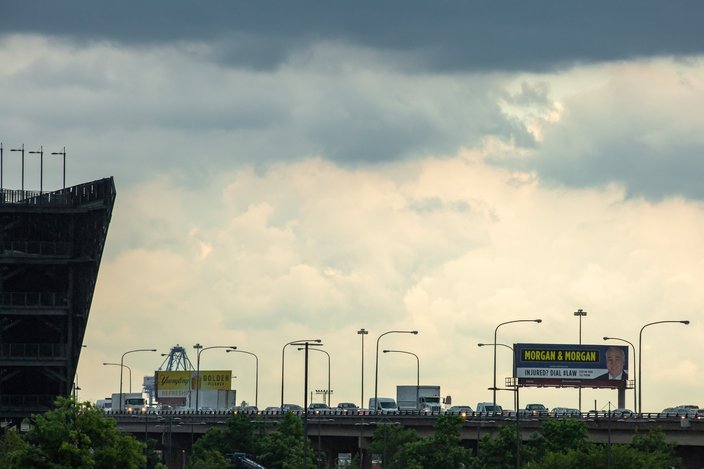 Philadelphia is already under a flood warning extended until 6:45 p.m. Thursday by the National Weather Service in Mount Holly, which said the Wissahickon and Pennypack creeks were running very high late Thursday morning.

Meanwhile, a flash flood watch remains in effect through late Thursday night. The weather service said another 1 to 3 inches will fall again in the upcoming hours, with flash flooding likely again. Already-flooded areas will not need to see much more rainfall before flooding again. Damaging winds and hail are possible, as well.

Showers and thunderstorms are expected to taper off after midnight, as dry air filters in from the north and west. Fog is likely overnight Friday.

The rain that fell overnight, forecasters said, was the result of a stalled frontal boundary that continues to lift through the day.

The county Department of Public Safety said its dispatch center received more than 1,000 calls for service between midnight and 7 a.m., about five times normal call volume. More than 240 were fire calls with about 70 of those for occupied vehicles stuck in water, county officials said. In response, officials opened up its Emergency Operations Center about 3:30 a.m. Thursday, and will keep it open through the upcoming storm.

PATCO suspended service for several hours on Thursday morning due to storm damage. The transit agency tweeted photos of several flooded stations and reported that track ballast – the stone that holds track in place – had washed away in some areas. It was making repairs and cleaning up.

At the request of the county Freeholder Board, New Jersey Gov. Phil Murphy issued a major disaster declaration.

“Based on our first responders' experience last night please get off the roads and stay at home during this upcoming storm system,” Freeholder Jonathan Young, liaison to the Department of Public Safety, told residents.

Camden County authorities warned that another 4 inches of rain was possible later Thursday, as well as winds in the 50-60 mph range and the possibility of an isolated tornado.

The good news is that when the latest storm system moves out Thursday night, the region looks to be rain-free for several days.

Thursday afternoon: Showers and thunderstorms, mainly after 4 p.m. High near 86. Southwest wind around 8 mph. Chance of precipitation is 80 percent. New rainfall amounts between a quarter and half of an inch possible.

Thursday night: Showers and thunderstorms, mainly before 1 a.m. Some of the storms could produce gusty winds, heavy rain and frequent lightning. Patchy fog. Low around 68. West wind 6 to 8 mph. Chance of precipitation is 80 percent. New rainfall amounts between a quarter and half of an inch possible.

Friday: A chance of showers before 2pm. Partly sunny, with a high near 80. Northwest wind 9 to 17 mph, with gusts as high as 28 mph. Chance of precipitation is 30 percent. New precipitation amounts of less than a tenth of an inch possible.

Friday night: Mostly clear, with a low around 61. Northwest wind 9 to 11 mph.

Saturday night: Mostly clear, with a low around 60.

Sunday night: Partly cloudy, with a low around 67.

Monday: A chance of showers and thunderstorms. Partly sunny, with a high near 89. Chance of precipitation is 40 percent.

Monday night: A chance of showers. Mostly cloudy, with a low around 72. Chance of precipitation is 40 percent.

Tuesday: A chance of showers. Partly sunny, with a high near 89. Chance of precipitation is 40 percent.

Tuesday night: Partly cloudy, with a low around 69.

Wednesday: Mostly sunny, with a high near 88.