Some travelers feeling vulnerable as they take flights 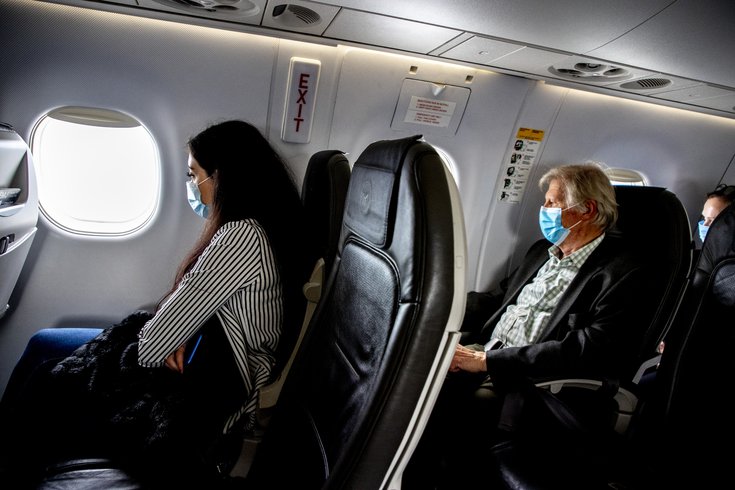 Some travelers are feeling vulnerable as they take flights amid the COVID-19 pandemic.

Tony Scott boarded an American Airlines flight May 25 from Los Angeles to Dallas. It was a trip he felt he had to take despite concerns about the coronavirus. His son, who lives in Texas, was having health problems.

The teen seated next to Scott in business class wasn’t wearing a mask. Scott was surprised because before the flight he received an email from American reminding him masks were required. He flagged down a flight attendant, who gently reminded the teen of the face-covering rule. She still declined to wear the mask, and the flight attendant told Scott that because she was a minor, the teen was exempt from the requirement.

But Centers for Disease Control and Prevention guidelines state that only children younger than 2 are exempt. The flight attendant also didn’t offer to move Scott to another seat.

Scott, a 53-year-old African American with asthma, was upset. He said he is in a high-risk category for COVID-19 and was shocked by this experience. “I’m very worried about getting coronavirus,” Scott told KHN. “I want to be safe, I don’t want to die and I want the airline to stop putting people at risk.”

Josh Freed, an American Airlines spokesperson, reiterated the policies on the company’s website but declined to discuss Scott’s situation.

As consumers consider traveling again, they discover the public health guidelines in place for flying often are a messy patchwork of precautions that lack the teeth to protect passengers. More often, the priority is on selling tickets. And, so far, federal agencies have been loath to establish and enforce specific safety standards.

Last week — nearly a month after Scott’s flight — it was widely reported that American escorted a passenger off a flight after he refused to wear a mask and then banned him from future American flights while the mask rule remains in place. It was the first known incident of stepped-up enforcement of airlines’ updated COVID policies. American now states that if a passenger is not exempt from wearing a face mask and refuses to wear one, they may be denied boarding and future travel on American.

It’s not the only airline to take such action. In mid-June, Airlines for America, the trade group that represents the major U.S. airlines, announced that its members would be “vigorously enforcing” face-covering policies by communicating before the flight and making onboard announcements. The group said it would be up to each airline to determine the appropriate consequences for not wearing a face mask.

“All A4A [Airlines for America] carriers have implemented a face-covering requirement and have determined the appropriate consequences for passengers who are found to be in noncompliance,” said the group’s spokesperson, Katherine Estep.

United said passengers will lose travel privileges with the airline for a certain period of time that “will be determined when we review the incident.” Delta said a refusal to comply will “risk future flight privileges.” Southwest said it will deny boarding to any customer not wearing a mask.

The announcement comes after most major U.S. airlines started requiring masks on board flights in early May. But, since that announcement, many consumers, such as Scott, reported that the policy wasn’t being enforced.

But the federal government has continued to leave it up to the airlines to regulate themselves regarding masks and other policies to foster consumer confidence in air travel.

Take the social distancing policies. Though most airlines outline on their websites measures to help passengers maintain social distance, the specifics vary significantly.

Both United Airlines and American haven’t committed to blocking out seats, though United said it will be “adjusting advance seat selection” and American said it may reassign seats or move people once onboard and is capping occupancy on flights.

Delta and Southwest said they are blocking middle seats to ensure space between customers — a distance of about 20 inches. Delta is also blocking some window and aisle seats, and JetBlue is doing the same for middle and aisle seats, with both airlines basing these decisions on the size of the aircraft. Exceptions are usually allowed for families who want to sit together.

The websites for some budget airlines, such as Frontier, Spirit and Allegiant, don’t provide such social distancing specifics. Allegiant does say reseating may occur, if possible, and it discourages customers from booking the middle seat.

There are also the matters of boarding and even health screenings.

Delta, United, JetBlue and Frontier are boarding passengers from back to front so they don’t have to closely pass one another. Southwest is boarding 10 people at a time, from only one side of the boarding poles. Airlines have also modified food and beverage service.

And on June 1, Frontier became the first U.S. airline to start screening passengers for fever before boarding. The airline said any passenger with a temperature over 100.4 degrees Fahrenheit will be denied boarding, though customers will be checked again after a “rest period” if there is time. Since April, Frontier has also been requiring passengers when they check in to verify that they have no COVID symptoms, nor does anyone else in their household. United, Southwest and Allegiant are now asking passengers to fill out health questionnaires at check-in.

No other airlines are screening temperatures yet, though the Trump administration has reportedly been in talks with the Transportation Security Administration to test the idea at select airports as part of the security check process. But it’s unclear how exactly this would work. Would TSA follow a model similar to Frontier’s? Would airlines charge rebooking fees for passengers turned away?

“At this time, no decision has been made regarding health screening measures at airports,” TSA spokesperson Lorie Dankers said in an email. And the agency isn’t eager for a public discussion. “It is premature to talk about any aspect or specifics of how this could even occur,” said Dankers.

‘The airlines can do whatever they want’

Since March, the airline industry has suffered significant losses, with travel down by almost 90% because of stay-at-home orders and fears of the pandemic. But as businesses restart operations, it has sent clear signals about its hopes for how travel will proceed amid COVID-19 concerns: Airlines want the leeway to set and manage their own safety requirements while they regain their financial footing.

Besides announcing more vigorous face mask enforcement, Airlines for America also recently launched a public awareness campaign that “showcases the proactive measures U.S. airlines are implementing to enhance sanitation and disinfection procedures,” said Estep, in a statement. Some of the burden falls on customers and Estep said the campaign would remind “the traveling public of steps they can take to help prevent the spread of COVID-19.”

The National Air Carrier Association, whose members are low-cost airlines such as Frontier, Spirit and Allegiant, takes a harder line. It opposes any federal regulation to enforce capacity limits on planes or block out middle seats, saying such measures could cause bankruptcy and higher ticket costs. “Things that might work for legacy carriers could put low-cost carriers out of business,” said spokesperson Dan Stohr.

“The position of DOT is the airlines can do whatever they want,” said Paul Hudson, president of FlyersRights.org, a consumer organization. “The FAA is supposed to deal with safety, but they have taken the position that they cannot regulate health unless they are directed to do so by the DOT secretary.”

Indeed, FAA Administrator Steve Dickson wrote in an April letter to the Air Line Pilots Association, the largest pilots union, that the FAA is “not a public health agency.”

And Dickson told a Senate committee last week that the CDC, not the FAA, is the lead agency charged with requiring safety precautions against the spread of the coronavirus.

“Our space is aviation safety, and their space is public health,” he said.

He did add, however, that the agency is monitoring airlines’ voluntary safety programs “to make sure they are following through” and that airlines have been better about enforcement.

But some Democrats on Capitol Hill are pressing for more. Sen. Maria Cantwell of Washington and the leadership of key House committees separately sent letters in May to Transportation Secretary Elaine Chao asking her to issue uniform guidelines about seating on flights and other aspects of air travel.

Because the federal government provided significant financial assistance to the airline industry in the CARES Act to help it survive the coronavirus era, some argue the government should also set uniform safety standards.

“We are spending somewhere between $40 and $50 billion in a variety of grants and subsidies to airlines to help them make it through this episode, and yet the government won’t go to the extent of promulgating a rule to make everyone wear masks, which puts us all at risk,” said Robert Mann, an aviation analyst.

How to be safe now?

While this debate continues in Washington, and airlines push toward an economic recovery tied to their ability to regain customers, passengers should remember that the rules to protect against COVID-19 in public spaces apply to every area of the airport and plane.

Wear a mask at all times. Put 6 feet of space between yourself and others. Touch as few surfaces as possible. Wash your hands frequently and use hand sanitizer. If you’re going to sit in a space for a while, such as at the gate, wipe down the areas around you.

And most importantly: Remember that the nation is in the midst of a pandemic. “Don’t travel by air or other means if it’s not necessary,” said Henry Wu, director of the Emory TravelWell Center and an assistant professor at Emory University School of Medicine. “It is certainly possible to get COVID-19 while traveling.”