After the 2020 presidential election, Schmidt said he received threats motivated by a tweet from former President Donald Trump 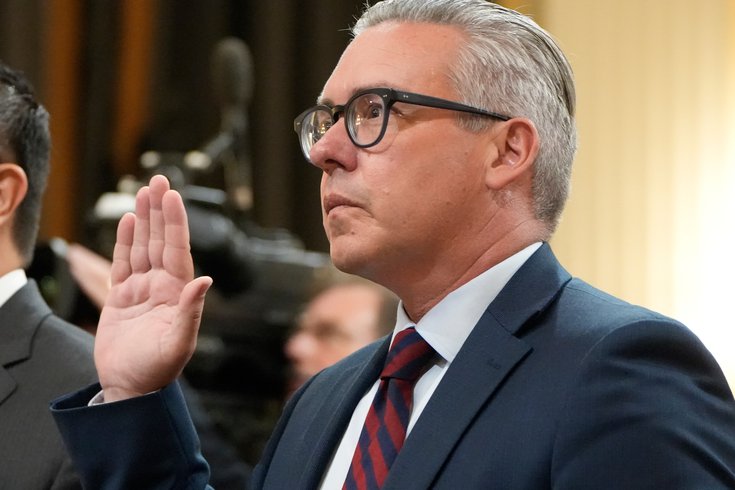 Al Schmidt, a former Philadelphia City Commissioner, testified Monday about the threats he received following the 2020 presidential election. Schmidt was called as a witness in the Jan. 6 committee hearings.

Former Philadelphia City Commissioner Al Schmidt testified Monday before the U.S. House Select Committee investigating last year's Capitol insurrection. The televised hearings are meant to review evidence of whether the Capitol riot was premeditated by former President Donald Trump and other Republicans who falsely spread misinformation about voter fraud in the 2020 presidential election.

Schmidt, the city's lone Republican commissioner at the time of the election, was called by the select committee to testify about the threats he and his family received in the tense months after Joe Biden's presidential victory leading up to the insurrection in Washington, D.C.

In the week after the 2020 election, as Philadelphia's vote count showed a clear advantage for Biden, the scene around the Pennsylvania Convention Center grew increasingly tense. On the night of Nov. 5, two men were arrested near the convention center with loaded pistols and an AR-15-style rifle. One of those men was Joshua Macias, the co-founder of Veterans for Trump, who later participated in the Jan. 6 riot and is currently awaiting trial over illegal gun possession and election interference charges.

Then, on Nov. 11, Trump lashed out at Schmidt on Twitter, targeting the commissioner for failing to halt the vote count amid his campaign's unfounded claims of fraud. The former president put Schmidt's name in the national spotlight, leading to threats that Schmidt already had testified about in front of the Senate last October.

"A guy named Al Schmidt, a Philadelphia Commissioner and so-called Republican (RINO), is being used big time by the Fake News Media to explain how honest things were with respect to the Election in Philadelphia," Trump's tweet said. "He refuses to look at a mountain of corruption & dishonesty. We win!"

At the time, Schmidt was the only Republican on the three-member panel of commissioners overseeing the elections in Philadelphia. He resigned last November to become president and CEO of the Committee of Seventy, a local nonpartisan government watchdog group in the city.

At Monday's hearing, Schmidt shared that the threats from Trump supporters became personal after the former president's tweet. Previously, Schmidt said, the content of the threats he and his staff received included only general hints about retaliation for alleged government corruption.

"After the president tweeted at me by name, calling me out the way that he did, the threats became much more specific, much more graphic, and included not just me by name, but included members of my family, by name, their ages, our address, pictures of our home," Schmidt said. "Just every bit of detail that you could imagine. That was what changed with that tweet."

The hearings also featured footage of previously undisclosed testimony from former U.S. Attorney General Bill Barr, who discussed his observation and knowledge that the Trump campaign's election fraud claims were without merit leading up to the Capitol riot.

Below is a video of Monday's hearing. (Note: the video is set to begin with Schmidt's testimony).

During Schmidt's testimony on Monday addressed false allegations made by former Trump attorney Rudy Giuliani, among others, that thousands of dead voters cast ballots in Pennsylvania in the 2020 election.

"Not only was there not evidence of 8,000 dead voters voting in Pennsylvania," Schmidt said. "There wasn't evidence of eight. We took seriously every case that was referred to us, no matter how fantastical, no matter how absurd, and took every one of those seriously, including these."

The Jan. 6 committee is made up of seven Democrats and two Republicans, who led a 10-month investigation in the run-up to last Thursday's first televised hearing. The group does not have the authority to prosecute, but aims to present a compelling case to the Justice Department to consider a criminal indictment against Trump.

The panel claims its investigation found evidence that Trump acted with malice by repeating unfounded claims of a rigged election. As courts around the country rejected dozens of the Trump campaign's legal challenges, the former president willfully continued to spread misinformation that culminated in a mob storming the Capitol to block the certification of election results, the panel has argued.

The House panel plans to hold several additional televised hearings, including on Wednesday and Thursday of this week, in a series expected to continue for several weeks.

U.S. Attorney General Merrick Garland said Monday that the Justice Department is reviewing the hearings and will consider the evidence presented for possible charges. More than 800 people have been charged with crimes for their alleged roles in the Jan. 6 riot, but there is no indication at this time that charges against Trump are imminent.