By Brian A. Saunders
PhillyVoice Staff
Business Airlines
from 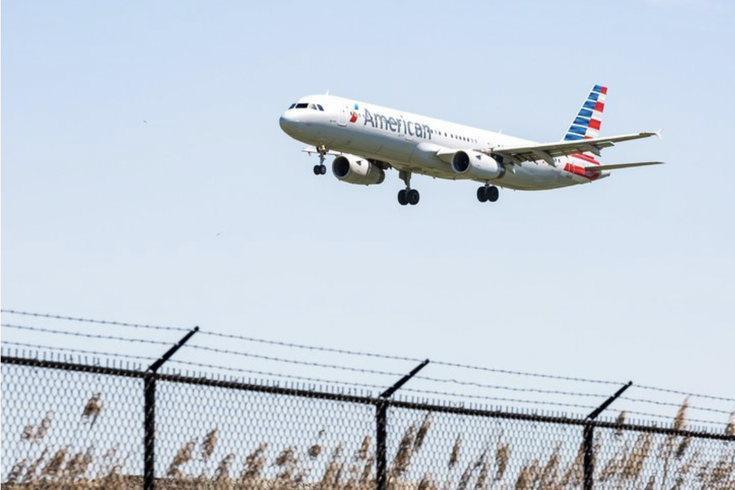 American Airlines is eliminating 1,800 flights to and from Philadelphia International Airport in September and October. Company officials say the move is due to staffing shortages which have been exacerbated by more people traveling after COVID-19 restrictions were lifted.

American Airlines, the nation's largest airline, will eliminate more than 1,800 flights at Philadelphia International Airport in September and October.

Meanwhile, the demand for travel options has surged since pandemic restrictions were eased, which has further stressed the carrier. One travel industry organization estimates 35 million more Americans plan to travel this summer than did in 2021.

Despite the cuts, the airline said it will still offer more flights than any other airline in and out of Philadelphia, which serves as one of American's hub airports.

According to the Business Journal, the number of flights American Airlines has scheduled at Philadelphia International in September is down to 11,645. The cuts affect 553 departing flights and 568 arrivals next month, and the October reductions amount to 45,185 fewer seats.

American Airlines allows travelers to book flights up to 331 days in advance. Many passengers have scheduled flights months in advance, including for September and October.

Last month, American cut 5% of its flight nationwide. The airline told FOX Business there were 241 daily departing flights from Philadelphia's airport in July. This month the average daily departures are 213, and the projected per day totals for September and October are 213 and 224, respectively.

PHL's deputy director of strategic partnerships, Kate Sullivan, told Business Journal that airline cutbacks are indicative of the changes all airlines are making based demand and staffing shortages.

Staffing across airlines is a complex issue that was only exacerbated during the pandemic. Business Insider reported there were 2.3 million fewer people working for airlines in September of 2021 than had been at the beginning of the pandemic.

Umang Gupta, who works for Alton Aviation, told Business Insider last month that the demand for travel began to recover as COVID-19 mitigation restrictions eased; however, there were fewer pilots to help airlines meet that demand. During the pandemic, thousands of pilots opted for early retirement packages, and the interruption in hiring and training new pilots put airlines at a disadvantage. There also are fewer people interested in joining the industry.

The federal government allotted a $54 billion relief package to airlines during the pandemic to incentivize their staffs to be ready to return to work once the demand to travel returned; however, the money went towards retirement packages instead, and creating this staffing issue.

American spokesperson Brian Metham said that the airline had taken measures with its available resources to ensure that there is a cushion in the rest of its summer schedule, heading into fall, the lessen the chance of flight delays and cancelations.

"Last month, American took proactive steps to add resiliency to our schedule by reducing overall system capacity for September," Metham said. "Then (late in July), American made proactive adjustments to our October schedule; these changes are similar to the adjustments made in recent months as customers return to travel and the destinations most meaningful to them."

USA Today calculated that American's cuts equal about 3% of its scheduled flights at Philadelphia International in September – or about seven flights a day. In October, the airline has removed about 13 flights per day or 5% of its flights to and from Philly.

The airline said customers whose travel arrangements are directly affected by the flight reductions would be contacted with alternative options. Those who can't be accommodated may have the option for a refund.