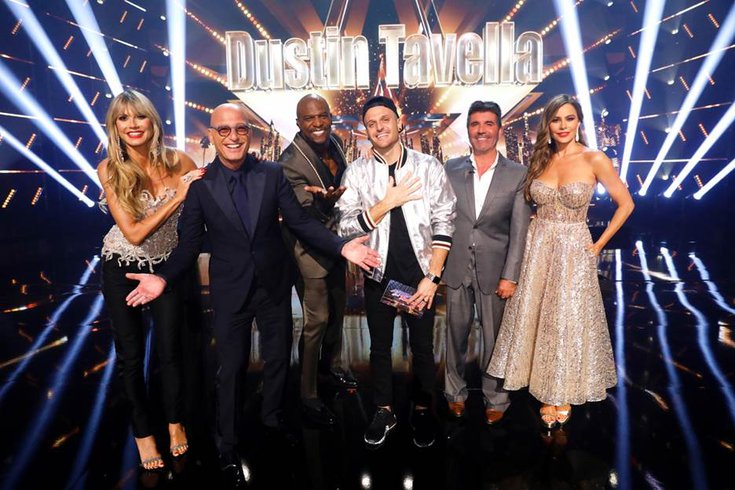 Pottstown native Dustin Tavella is the third magician ever to win 'America's Got Talent.'

Dustin Tavella, a Montgomery County native who grew up going to magic shows in Atlantic City with his grandparents, is the newest winner of "America's Got Talent."

The 35-year-old magician was crowned the winner of the talent show's 16th season Wednesday night after wowing viewers and the judges with his inspirational magic tricks.

"Thank you guys so much," an emotional Tavella said after winning. "This is absolutely amazing. I never thought that I would be here. This is so crazy. Thank you guys, everybody who voted, my family, my wife, my beautiful boys, my parents, everyone. I love you guys so much."

Tavella beat out nine finalists for the show's $1 million grand prize and the opportunity to headline a stage show at the Luxor Hotel and Casino in Las Vegas. Tavella's performance dates in Sin City have yet to be announced.

Tavella is the third magician to win the talent show competition, according to USA Today.


That smile says it all! 😁 A BIG congrats to our new #AGT winner, @dustintavella! pic.twitter.com/8r2JJEAv2P

Tavella's interactive magic tricks frequently invoked stories from his personal life, including his childhood, parents, wedding day and the adoption of his two sons. His performances also showcased his passion for philanthropy and encouraged the audience to connect with people from all walks of life.

During his final solo performance Tuesday, Tavella used photos and written messages to inspire the audience to give back to others.

During Wednesday's finale in Hollywood, Tavella performed alongside fellow magician Mat Franco, the winner of the talent show's ninth season. They used a box full of teddy bears to share a message about kindness.

Tavella now lives in Virginia Beach, Virginia with his wife and two sons. In addition to performing magic, he has worked with organizations assisting people experiencing homelessness and women in crisis. He also has participated in youth mentoring programs.